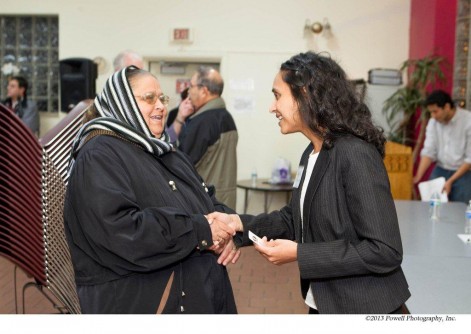 The Picture Good Health program, based in the city’s South Lawndale/Little Village neighborhood, included an eight-week series of classes led by trained community members. The participants, mostly older Latino women, all had a previous diagnosis of diabetes and were recruited from two Catholic church communities. The results of the study, published April 28 in the Journal of General Internal Medicine, demonstrate the effectiveness of partnering with faith-based organizations to deliver diabetes education in the Latino community.

“People were very pleased with the fact that the program was at the church, the fact that the class leader was someone from the community and it was held in a comfortable, familiar place,” said Arshiya Baig, MD, MPH, assistant professor in the Department of Medicine at the University of Chicago and lead author of the study.

The project was a collaborative effort with the Little Village Community Advisory Board, made up of leaders from the community who helped recruit participants and organize local resources. During each session, participants discussed their personal experiences with diabetes, how it affected their families and where they found resources locally to manage the disease. Community members trained by research staff led the discussion, which usually began with participants sharing personal photos that illustrated how diabetes affected their lives, and what they were doing to cope with the challenges.

Six months after the conclusion of the program, participants in the eight-week class reported fewer days of eating high-fat foods and more days of participating in exercise than those who attended a single, 90-minute lecture. There were no statistically significant differences in weight, hemoglobin A1C, LDL cholesterol and blood pressure levels between the two groups at follow up, but Baig said she suspects those changes would begin to manifest as participants’ healthier diet and exercise habits continued over a longer period of time.

Baig said the Picture Good Health program shows how important it is to provide educational resources for people with diabetes in comfortable, accessible setting among peers.

“People were sharing very intimate details about their families, their lives and their struggles with people they would normally consider strangers. But somehow they felt very comfortable and supported by people who spoke their language, who were of their faith, had a similar diagnosis and who came from a similar upbringing,” she said. “It normalizes the experience. So if a person is distressed about the cost of medication or the impact on their family and diet, they can speak about it in a comfortable environment. Then when someone else says, ‘I have that same issue,’ somehow you feel okay too.”

The study, “Picture Good Health: A Church-Based Self-Management Intervention among Latino Adults with Diabetes,” was funded by the University of Chicago Clinical and Translational Science Award, the National Institute of Diabetes and Digestive and Kidney Diseases Diabetes Research and Training Center, and the Chicago Center for Diabetes Translation Research. Additional authors include Amanda Benitez, Yue Gao, Sang Mee Lee, Michael Quinn, Deborah Burnet and Marshall Chin from the University of Chicago; and Cara Locklin, Marla Solomon and Lisa Sanchez-Johnsen from the University of Illinois at Chicago.