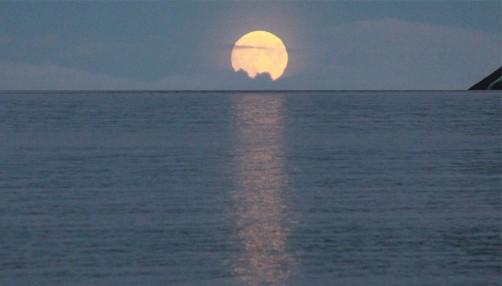 Moonlight plays an important role in synchronizing the reproductive cycles of marine life. 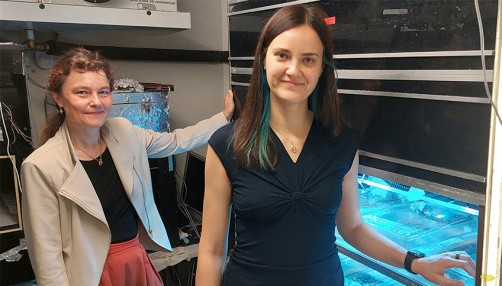 Newswise — How animals are able to interpret natural light sources to adjust their physiology and behaviour is poorly understood. The labs of Kristin Tessmar-Raible (Max Perutz Labs Vienna, Alfred Wegener Institut, University of Oldenburg) and Eva Wolf (Johannes Gutenberg University and Institute of Molecular Biology Mainz) have now revealed that a molecule called L-cryptochrome (L-Cry) has the biochemical properties to dis-criminate between different moon phases, as well as between sun- and moonlight. Their findings, published in Nature Communications, show that L-Cry can interpret moonlight to entrain the monthly (circalunar) clock of a marine worm to control sexual maturation and reproduction.

Many marine organisms, including brown algae, fish, corals, turtles and bristle worms, synchronize their behavior and reproduction with the lunar cycle. For some species, such as the bristle worm Platynereiis dumerilii, lab experiments have shown that moonlight exerts its timing function by entraining an inner monthly calendar, also called circalunar clock. Under these laboratory conditions, mimicking the duration of the full moon is sufficient to entrain these circalunar clocks. However, in natural habitats light conditions can vary considerably. Even the regular interplay of sun- and moon creates highly complex patterns. Organisms using the lunar light for their timing thus need to discriminate between specific moon phases and between sun and moonlight. This ability is not well understood. "We have now revealed that one light receptive molecule, called L-Cry, is able to discriminate between different light valences," says co-first author of the study, Birgit Poehn. This Cryptochrome thereby serves as a light sensor that is able to measure light intensity and duration, thus helping the animals to choose the "right" light to adequately adjust their monthly timing system.

In collaboration with the lab of Eva Wolf, the team characterized L-Cry from its biochemistry to functional genetics. "We found that the ability of L-Cry to interpret light correlates with distinct molecular states of L-Cry," explains Birgit Poehn. Particularly, the cryptochrome contains cofactors, non-protein components essential for its function. These co-factors, called flavin adenine dinu-cleotides (FAD), undergo biochemical changes under the influence of light, where dark-adapted oxidized FAD transitions to a photoreduced FAD state. Co-first-author Shruthi Krishnan worked out that L-Cry proteins exposed to naturalistic moonlight accumulate the low photon numbers of the moonlight over hours, but at most only half of the FADs get photoreduced. In contrast, the more than 10000-fold higher photon number of the naturalistic sunlight used in the experiments causes a rapid photoreduction of all FAD molecules within minutes. The authors suggest that consequently, L-Cry acquires distinct structural and biochemical properties depending on the combinatorial status of the FADs in its dimer. Thereby it serves not only as an efficient, but also discriminatory light sensor over an extremely wide-range of natural light intensities.

The scientists could also show that L-Cry undergoes changes in its subcellular localization, depending on its exposure to sunlight or moonlight. How this differential localization translates into different signaling pathways that control behavior and physiology, and how the light-induced transport of L-Cry between nucleus and cytoplasm is achieved, are key questions that will be the subjects of further studies. The mechanism, however, is also relevant for other biological clocks and light-controlled processes: "We think that what we have uncovered goes beyond the monthly timing system," says Eva Wolf. Kristin Tessmar-Raible adds: "It could be a more general process that helps organisms to recognize light sources, which is of key ecological importance for any organism that adjusts its physiology and behavior by light. Furthermore, moonlight is not just a dim version of sunlight, it has very different temporal-ecological implications for organisms." Consequently, perturbations through nocturnal light pollution pose serious threats to natural ecosystems and also human health. A better understanding of how moon light is sensed and processed may also help assess and mitigate the negative impacts of artificial light.