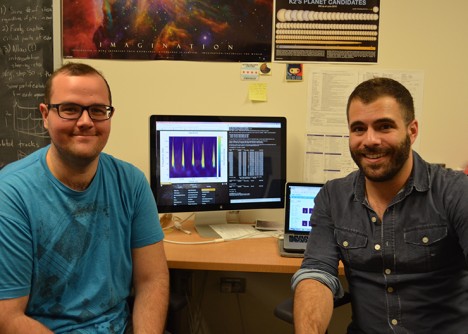 Newswise — EVANSTON, Ill. --- The recent historic detections of gravitational waves -- ripples in the fabric of spacetime predicted by Einstein’s theory of general relativity -- has launched a new field in astronomy. Now, the general public has the opportunity to help scientists, including Northwestern University astrophysicists and computer scientists, catch more gravitational waves and propel the field forward.

Northwestern’s astrophysics center, CIERA (the Center for Interdisciplinary Research and Exploration in Astrophysics), is leading a new crowdsourcing project called Gravity Spy to sift through the massive amounts of data being produced by the twin Laser Interferometer Gravitational-Wave Observatory (LIGO) detectors located in the U.S.

Due to the detectors’ extremely high sensitivity, the LIGO data has a lot of “glitches” -- transient noise from instrumental and environmental sources that can mimic true gravitational-wave signals. Gravity Spy engages thousands of “citizen scientists” in classifying these glitches, increasing the chances of success in the gravitational-wave search.

The innovative project combines gravitational-wave physics, machine learning and social science. In fact, this is the first citizen-science project to couple human and machine-learning classification in an integral, productive way.

“Classifying, characterizing, understanding and eventually eliminating noise is very important for our LIGO data analysis and the discovery of black holes,” said Vicky Kalogera, CIERA director and a senior astrophysicist in the LIGO Scientific Collaboration. “The citizen scientists’ contributions are invaluable.”

More than 8,500 volunteers from around the world have classified 2 million glitches since the project’s launch in October. Children and adults alike participate, classifying glitches viewed on their computer screens from the comfort of home, office or coffee shop. As users gain more experience, they advance to more challenging levels containing glitches that sophisticated computer algorithms have deemed more difficult to classify.

“We want to understand the glitches in the data and separate them out, making it easier for us to identify real gravitational-wave signals in the LIGO data,” said Kalogera, the Erastus O. Haven Professor of Physics and Astronomy in the Weinberg College of Arts and Sciences. “Our volunteers use the amazing capacity of the human brain to visually classify hundreds of thousands of noise glitches.”

LIGO has made three detections of gravitational waves since September 2015, with the third being announced today (June 1). Gravitational waves are ripples in the fabric of space and time, a major prediction of Albert Einstein’s 1915 general theory of relativity. The waves pass through Earth and can be “heard” by the sensitive LIGO detectors.

“We’ve had a huge response to Gravity Spy,” Zevin said. “The motivated volunteers we’ve attracted are really a testament that people from the lay public care about scientific progress. They care about the things that really need to be done to make our job and the science better in the long run.”

Glitches appear to volunteers as pictures on the computer screen in a wide range of morphologies, or forms, and can mimic true gravitational-wave signals. Morphological categories of glitches include blip, koi fish, paired doves, whistle and helix.

Zevin points out that as good as Gravity Spy’s computer algorithms are, people still have the edge in identifying slight morphological differences. “Humans are really good at spotting discrepancies, so our project fits naturally into this crowdsourcing idea,” Zevin said.

While crowdsourcing is useful, LIGO produces millions of glitch signals. This huge volume of data necessitated an innovation in Gravity Spy’s design. The researchers leverage the work of the citizen scientists to help train machine-learning algorithms, which can classify many more glitches. The better the computer is at classifying glitches, the more it can recognize and feed new glitches to human volunteers.

Gravity Spy does not upload a static set of data for volunteers to work with. Since the LIGO detectors run constantly, for weeks at a time, the data feed is continually updated. A goal of the project, and one of its biggest challenges, is to create a “live” system that provides a constant feedback loop: when the LIGO detectors pick up a glitch or a user classifies an image, it rapidly updates the infrastructure of Gravity Spy.

“With the help of dedicated volunteers and Gravity Spy, we can take a big step forward toward solving one of LIGO’s biggest challenges,” Coughlin said.