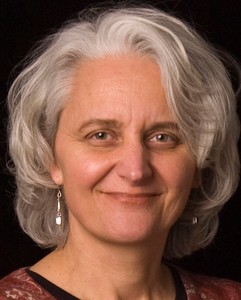 Newswise — Annegret Staiger, a Clarkson University associate professor of anthropology who teaches on race, ethnicity, and sexuality and gender issues, was recently invited to speak at the University of Wyoming in Laramie during a series of talks on “25 Years of German Unity.”

“After 25 years of reunification, the big question is to what extent has the once-divided Germany grown together culturally," says Staiger. "My talk, 'From Nudity Cultures in East and West to Sauna Club Mega Brothels,' was based on my research on FKK Clubs, and it provides a fresh perspective on that subject. FKK clubs have become the most spectacular brothel venues to emerge since the legalization of prostitution in 2002.”

FKK (Freikörperkultur) is a German movement whose name translates to Free Body Culture.

Beginning as a movement against stiff cultural mores and repressive urban living, the FKK movement of the early 20th Century advocated a celebration of the body free and unencumbered. While the nudist movement then became a convenient tool for Nazi ideologies of the body and racial superiority, the movement changed into quite different cultural manifestations in the divided East and West Germany.

While the practice of spending time in nature without clothes had become a major family leisure pursuit in the “repressive” East Germany, nudism remained a fringe and/or counterculture movement for West Germans. After the nation reunited, however, an openness to nudism became one of the few cultural exports from East to West.

“While initially this meant an extension of clothing-free zones from beaches to public swimming pools, and other commercial venues, FKK now has come to stand primarily for fancy sauna club mega brothels that have sprung up all over Germany," says Staiger. "In my talk, I traced the history of FKK from pre-war Germany in the early 19th Century to its present state as a euphemism for prostitution.”

Her talk prompted feedback from her audience in Wyoming, which included a surprising number of German speakers, she said. One person commented that the Nazi’s Eugenics diatribes and the belief that nudism and sports might prevent premature and/or illicit sexual activity sounded similar to American attitudes on sex at the time.

The ideas and attitudes raised by the series reflect Staiger's interest in gender, the body, and urban culture. As a Fulbright Scholar in 2014 at the University of Cluj Napoca, she explored how the Romanian state responds to Romanian women who are working in the German sex industry.

Stephanie Anderson, associate professor in the Department of Political Science and associate director of the Center for Global Studies, extended the invitation to the University of Wyoming. The Gender and Women’s Studies program and the German Embassy in Washington, funded the visit.