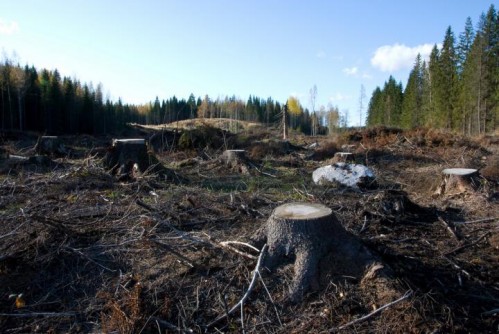 talaakso via Foter.com / CC BY

Clear-cutting loosens up carbon stored in forest soils, increasing the chances it will return to the atmosphere as carbon dioxide and contribute to climate change, a Dartmouth College study shows.

Newswise — HANOVER, N.H. - Clear-cutting loosens up carbon stored in forest soils, increasing the chances it will return to the atmosphere as carbon dioxide and contribute to climate change, a Dartmouth College study shows.

The findings appear in the journal Soil Science. A PDF is available on request.

Soil is the world's largest terrestrial carbon pool. In northern hardwood forests in the United States, mineral soil pools store up to 50 percent of total ecosystem carbon. Logging and other land-use changes are a major cause of soil carbon release, but there has been recent interest to further understand soil carbon dynamics in forested ecosystems after logging. This is of particular importance in the northeastern U.S. because of the great potential for the use of biomass as part of a diversified renewable energy portfolio.

The Dartmouth researchers explored whether clear-cutting changes the strength of the chemical bonds of carbon stored in mineral soils in hardwood forests in the northeastern United States. Clear-cutting involves harvesting all timber from a site at once rather than selectively culling mature trees. Carbon is stored in soil by binding only to certain soil structures.

The researchers collected soils from recently clear-cut forests and from older forests, and pulled carbon from the soil in a sequence of gentle to stronger extractions. The results showed that mature forest stands stored significantly more soil organic carbon in strongly mineral-bound and stable carbon pools than did soils from cut stands.

"Clear-cutting forests has an effect of mobilizing the carbon, making it more likely to leave the soil and end up in the atmosphere," says senior author Andrew Friedland, a professor of environmental studies. "These findings are important because differences in the relative distribution of carbon in organo-mineral pools in mature and cut forests may inform our understanding of soil organic matter stability and bioavailability, microbial decomposition and carbon dioxide production in ecosystems after clear-cutting."

Professor Andrew Friedland is available to comment at [email protected].