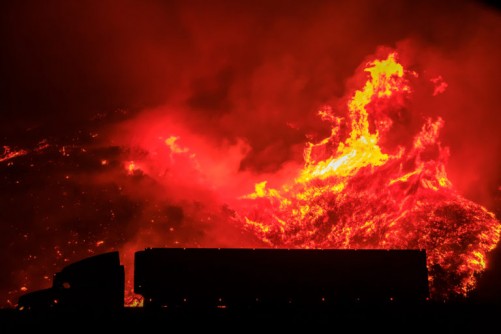 The concurrence of droughts and heat waves can exacerbate conditions and lead to another hazard, wildfires. In the western U.S., the number of blazes larger than 4 square kilometers has risen by about seven fires per year in the past three decades. In the same period, the total scope of burned areas has grown by more than 350 square kilometers per year. This upward trend will most likely continue, due to global warming and population growth.

Newswise — Irvine, Calif., Aug. 1, 2018 – Dry months are getting hotter in large parts of the United States, another sign that human-caused climate change is forcing people to encounter new extremes.

In a study published today in Science Advances, researchers at the University of California, Irvine report that temperatures during droughts have been rising faster than in average climates in recent decades, and they point to concurrent changes in atmospheric water vapor as a driver of the surge.

“Available soil moisture can remove surface heat through evaporation, but if the land is dry, there is no opportunity to transport it away, which increases the local temperature,” said lead author Felicia Chiang, a UCI graduate student in civil & environmental engineering. “Atmospheric conditions can influence soil, and we argue that they’re shaping the temperatures we experience during droughts.”

These changes point to a greater number of droughts and heat waves co-occurring. This can lead to such calamities as wildfires and loss of crop yields. Widespread conflagrations, spurred on by abnormally high summer temperatures, are currently burning around the world, including in parts of California, Scandinavia and Greece.

“Heat waves and droughts have significant impacts on their own, but when they occur simultaneously, their negative effects are greatly compounded,” said co-author Amir AghaKouchak, UCI associate professor of civil & environmental engineering and Earth system science. “Both phenomena, which are intensifying due to climate warming, are expected to have increasingly harmful consequences for agriculture, infrastructure and human health.”

He suggested that society has a responsibility to respond to the challenges presented by this new climate reality.

“The observed escalation in the number and intensity of wildfires is likely caused by the increase in frequency of hot droughts,” AghaKouchak said. “We need to bolster our resiliency against these threats to protect our population health, food supply and critical infrastructure.”

This study was partially supported by the National Oceanic & Atmospheric Administration.