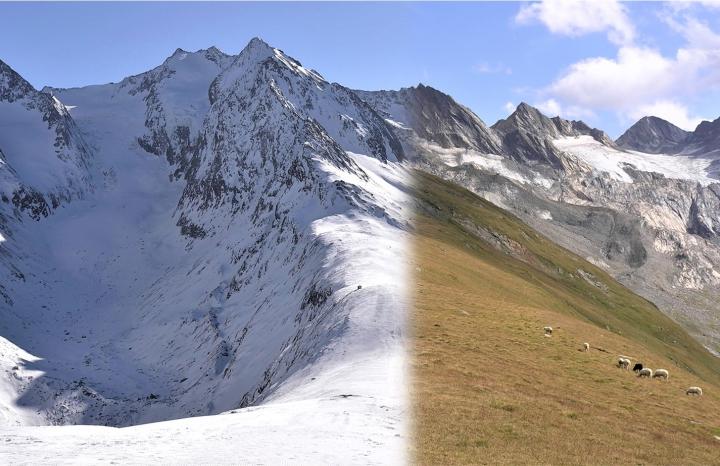 Winter and summer at the field site, Hohe Mut, high up in the Austrian Alps. Photo credit: Richard Bardgett

Newswise — Spring snowmelt in the Alps is occurring earlier in the year due to climate change and as a result triggering abrupt deviations in mountain ecosystems. These changes could negatively affect the functioning of these valuable ecosystems.

New research has demonstrated that vitally important microbial communities within Alpine soils are under threat as a direct result of increasing global temperatures caused by ongoing climate change. These belowground microbes critically support aboveground life because they recycle the key nutrients upon which all animals and plants depend, including humans. They also control how much carbon is stored safely in the soil, where it cannot cause further global warming.

In winter, Alpine soil microbes depend on snow to act as an insulating blanket, allowing them to continue to work throughout the cold alpine winter. However, it is estimated that the annual Alpine winter snowpack will begin melting over 100 days sooner than currently by the end of this century. Scientists from The University of Manchester demonstrate how this will affect soil microbes, and the critical functions they perform, by using in-the-field experiments and publishing their findings in The ISME Journal.

For scientists, understanding how soil microbes respond to climate change and how this influences biogeochemical cycles, remains a major challenge. This is especially pertinent in Alpine regions where climate change is taking place at double the rate of the global average.

Dr Arthur Broadbent from The University of Manchester is a lead author on the new research paper, he said: "Our paper reveals alarming climate change impacts on soil microbial communities, and the biogeochemical cycles that they regulate in mountain ecosystems. Using a high-alpine experiment in the Austrian Alps, we discovered that spring snowmelt triggers an abrupt seasonal transition in soil microbial communities, which is closely linked to rapid shifts in carbon and nitrogen cycling."

"Snowmelt is predicted to occur 50-130 days earlier in alpine regions due to climate change by the end of the century. Using experimental manipulations, we demonstrated that earlier snowmelt, of even just 10 days, leads to an earlier seasonal transition in microbial communities and biogeochemical cycling."

As a consequence, winter ecosystem functioning will be reduced in seasonally snow-covered ecosystems under future climate change, which threatens carbon retention and plant productivity. This would negatively affect agricultural production and disrupt natural ecosystems. It will also alter annual carbon fluxes in these ecosystems with the potential to cause further climate warming.