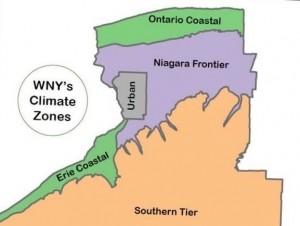 Any Western New Yorker who routinely drives from the Northtowns to the Southtowns knows weather conditions at one end may be extremely different from weather conditions at the other. A new map divides the eight-county region into five climate zones, reflecting more than local weather patterns. The map’s primary purpose will be to assess the effects of global climate change on local areas within WNY.

“We want to analyze existing climate trends so we can identify, prepare for, and take advantage of changes that are already happening,” said Stephen Vermette, a professor in the Geography and Planning Department at Buffalo State. “To do that, we’re looking at how those climate changes are affecting each zone.”

From Lake Ontario to the Ski SlopesThe eight-county region is divided into five climate zones based on three factors: elevation, proximity to large bodies of water, and population density. The Southern Tier is the highest; the City of Buffalo has the greatest population density; the coasts of Lake Erie and Lake Ontario are the most affected by the Great Lakes; and the Niagara Frontier is a transitional zone bounded on the north by the Niagara Escarpment and on the south by the higher-altitude Southern Tier.

Vermette worked with data from 1965 to the present, and Zachary Neudeck, a geography major, crunched the data last summer. Mary Perrelli, GIS lab supervisor, helped create some of the maps. Statistical analyses confirmed that dividing the region into five zones was a feasible starting point.

“Bear in mind that we consider this a first approximation,” said Vermette. “But it’s important to move forward, because appropriate responses in Western New York could vary a great deal from one zone to another.” In fact, the region’s varying geography may mean that the broad changes anticipated in the Northeast U.S. may not be the changes we experience here. For example, Vermette said the data don’t show that we are experiencing the increase in heavy rainfall expected in the Northeast.

Changes and Implications
The data does show that Western New York’s temperatures are rising, with variations among the five zones and within each season. It’s possible that the rate of temperature increase will be greater for nighttime lows than that for daytime highs. One effect so far is that the growing season has lengthened about two weeks since 1965. Other findings include increased snowfall in the Southern Tier and more frequent higher wind speeds during thunderstorms across all five zones.

Those changes have implications for many things including infrastructure, businesses, and agriculture.“The growing season may be longer," said Vermette, "But if we have warmer nights, will the maple syrup industry suffer? What of the impact on vineyards? Do we need to bury power lines to avoid recurring damage from higher wind speeds during thunderstorms? Should we require that new roofs in urban areas use white material to decrease the amount of heat absorbed and radiated into the urban environment?”

It’s not all doom and gloom. “We may experience population growth from climate-change migration,” he said. “More snow in the Southern Tier may be good for the ski industry.”

Vermette is collaborating with Designing to Live Sustainably and exploring opportunities with RENEW at the University at Buffalo, where he is an external affiliate. “We can all continue our efforts to slow climate change globally,” he said. “But we still have to adapt to climate change locally, and we hope our data will help Western New York to make smart choices.”