Climate Change Increases Risk of Crop Slowdown in Next 20 Years 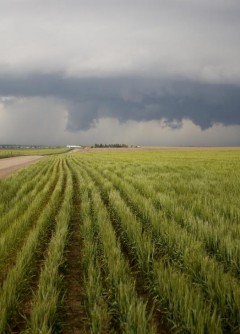 ©UCAR, photo by Carlye Calvin. This image is freely available for media & nonprofit use.

A storm looms behind wheat fields in eastern Colorado, where recurrent drought has had major impacts on agriculture over the last 15 years.

Newswise — BOULDER -- The world faces a small but substantially increased risk over the next two decades of a major slowdown in the growth of global crop yields because of climate change, new research finds.

The authors, from Stanford University and the National Center for Atmospheric Research (NCAR), say the odds of a major production slowdown of wheat and corn even with a warming climate are not very high. But the risk is about 20 times more significant than it would be without global warming, and it may require planning by organizations that are affected by international food availability and price.

“Climate change has substantially increased the prospect that crop production will fail to keep up with rising demand in the next 20 years,” said NCAR scientist Claudia Tebaldi, a co-author of the study.

Stanford professor David Lobell said he wanted to study the potential impact of climate change on agriculture in the next two decades because of questions he has received from stakeholders and decision makers in governments and the private sector.

“I’m often asked whether climate change will threaten food supply, as if it’s a simple yes or no answer,” Lobell said. “The truth is that over a 10- or 20-year period, it depends largely on how fast the Earth warms, and we can’t predict the pace of warming very precisely. So the best we can do is try to determine the odds.”

Lobell and Tebaldi used computer models of global climate, as well as data about weather and crops, to calculate the chances that climatic trends would have a negative effect of 10 percent on yields of corn and wheat in the next 20 years. This would have a major impact on food supply. Yields would continue to increase but the slowdown would effectively cut the projected rate of increase by about half at the same time that demand is projected to grow sharply.

They found that the likelihood of natural climate shifts causing such a slowdown over the next 20 years is only 1 in 200. But when the authors accounted for human-induced global warming, they found that the odds jumped to 1 in 10 for corn and 1 in 20 for wheat.

The study appears in this month’s issue of Environmental Research Letters. It was funded by the National Science Foundation (NSF), which is NCAR’s sponsor, and by the U.S. Department of Energy (DOE).

Global yields of crops such as corn and wheat have typically increased by about 1-2 percent per year in recent decades, and the U.N. Food and Agriculture Organization projects that global production of major crops will increase by 13 percent per decade through 2030—likely the fastest rate of increase during the coming century. However, global demand for crops is also expected to rise rapidly during the next two decades because of population growth, greater per-capita food consumption, and increasing use of biofuels.

Lobell and Tebaldi set out to estimate the odds that climate change could interfere with the ability of crop producers to keep up with demand. Whereas other climate research had looked at the crop impacts that were most likely, Lobell and Tebaldi decided to focus on the less likely but potentially more dangerous scenario that climate change would reduce yield growth by 10 percent or more.

The researchers used simulations available from an NCAR-based climate model (developed by teams of scientists with support from NSF and DOE), as well as several other models, to provide trends in temperature and precipitation over the next two decades for crop-intensive regions under a scenario of increasing carbon dioxide. They also used the same model simulations without human-caused increases in carbon dioxide to assess the same trends in a natural climate.

In addition, they ran statistical analyses to estimate the impacts of changes in temperature and precipitation on wheat and corn yields in various regions of the globe and during specific times of the year that coincide with the most important times of the growing seasons for those two crops.

The authors quantified the extent to which warming temperatures would correlate with reduced yields. For example, an increase of 1 degree Celsius (1.8 degrees Fahrenheit) would slow corn yields by 7 percent and wheat yields by 6 percent. Depending on the crop-growing region, the odds of such a temperature increase in the next 20 years were about 30 to 40 percent in simulations that included increases in carbon dioxide. In contrast, such temperature increases had a much lower chance of occurring in stimulations that included only natural variability, not human-induced climate change.

Although society could offset the climate impacts by planting wheat and corn in cooler regions, such planting shifts to date have not occurred quickly enough to offset warmer temperatures, the study warned. The authors also found little evidence that other adaptation strategies, such as changes in crop varieties or growing practices, would totally offset the impact of warming temperatures.

“Although further study may prove otherwise we do not anticipate adaptation being fast enough to significantly alter the near-term risks estimated in this paper,” they wrote.

“We can’t predict whether a major slowdown in crop growth will actually happen, and the odds are still fairly low,” said Tebaldi. “But climate change has increased the odds to the point that organizations concerned with food security or global stability need to be aware of this risk.”

Title: Getting caught with our plants down: the risks of a global crop yield slowdown from climate trends in the next two decades