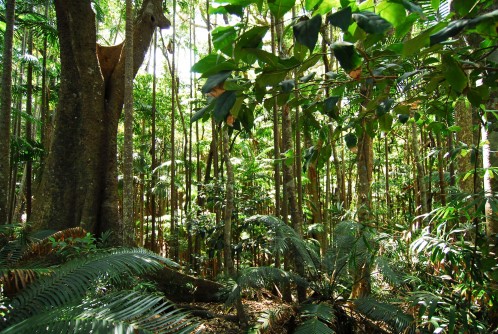 Local extinctions are almost twice as common in tropical species than temperate species.

Climate change is predicted to threaten many species with extinction, but determining how species will respond in the future is difficult. Dozens of studies have already demonstrated that species are shifting their geographic ranges over time as the climate warms, towards cooler habitats at higher elevations and latitudes. The new study, by Professor John J. Wiens from the University of Arizona, used these range-shift studies to show that local extinctions have already happened in the warmest parts of the ranges of more than 450 plant and animal species. This result is particularly striking because global warming has increased mean temperatures by less than 1 degree Celsius so far. These extinctions will almost certainly become much more widespread over time, because temperatures are predicted to increase by an additional 1 to 5 degrees in the next several decades. These local extinctions could also extend to species that humans depend on for food and resources.

The study also tested the frequency of local extinction across different regions, habitats, and groups of organisms. It found that local extinctions occurred in about half of the species surveyed across different habitats and taxonomic groups. However, the results showed that local extinctions varied by region and were almost twice as common among tropical species as among temperate species. This is important as the majority of plant and animal species live in the tropics. The results of this study contribute to our understanding of how plants and animals will respond to global climate change and highlight the need to slow and prevent further warming.

In your coverage please use this URL to provide access to the freely available article in PLOS Biology: http://dx.plos.org/10.1371/journal.pbio.2001104

Funding: The author(s) received no specific funding for this work.