In periods of water scarcity or drought, carnivores often enter human-dominated areas seeking food or water. Here two hyenas in Botswana have snuck into a compound at night to drink water from a bird bath. 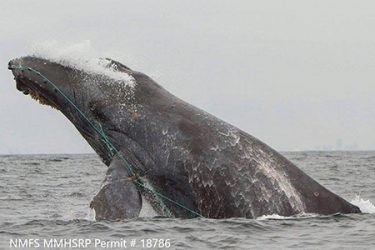 This breaching humpback whale is entangled in rope from fishing gear. 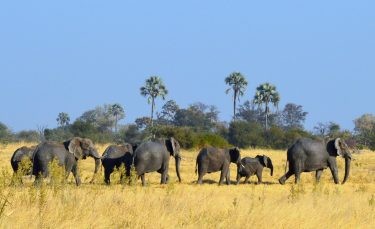 During droughts, African elephants can leave protected sites and enter agricultural areas in search of food. This can lead to crop damage and attacks on people. 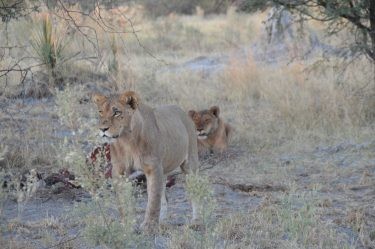 Lions on a kill in the Okavango Delta, Botswana. When natural prey are scarce, such as during a drought, lions and other large carnivores are more likely to prey on livestock.

Newswise — With wildfires spreading across the parched Western U.S., severe floods in Europe and in the coming decade a potential surge in coastal flooding, 2021 could be a pivotal year in how governments, societies and families view the threat of climate change.

Briana Abrahms, an assistant professor of biology at the University of Washington and its Center for Ecosystem Sentinels, is urging her fellow scientists to make their own pivot when it comes to climate change and another growing trend: conflicts between humans and wildlife. Human-wildlife conflicts can occur when people and wildlife move into the same area, or compete for the same resources, such as food.

As a handful of studies have shown, climate change is further exacerbating human-wildlife conflicts by straining ecosystems and altering behaviors, both of which can deepen the contacts — and potential competition — between people and animals. In an article published July 30 in the journal Science, Abrahms calls for expanding research into the many ways that climate change will impact the complex interplay between human activities and wildlife populations.

In a recent conversation with UW News, Abrahms explained how incorporating climate change into studies of human-wildlife interactions won’t just help scientists come up with ways to mitigate the effects of these conflicts. They could also alert policymakers, experts and ordinary citizens to potential sources of human-wildlife conflict before they even occur.

What led you to write this call to action?

I’ve been looking at this topic for some time. But I was really prompted when I had two clear examples from completely different ecosystems in front of me where extreme climate events led to a catastrophic conflict. That made me wonder how prevalent this is globally.

What were these examples?

In 2015 and 2016, there was a dramatic rise in the number of whales entangled in fishing gear off the west coast of the United States. There was a really unprecedented marine heat wave off of the coast of North America that had two effects. First, whales moved farther inshore to chase where their prey had moved during the heat wave. Second, it changed the timing of the Dungeness crab fishing season. This conjunction of the change in how whales use their available space in the ocean and the timing of this fishery created this perfect storm of overlap and led directly to a rise of whale entanglements.

The second example came from a report by the government of Botswana, which is where I’ve done a lot of my fieldwork. It cited the some of the highest numbers of human-wildlife conflicts on record — primarily large carnivores preying on livestock — during an extreme drought in 2018.

Why is it important to consider how climate change is driving human-wildlife conflicts?

Human-wildlife conflicts have been widely studied. Research shows that they have huge implications for biodiversity, human health, economics, quality of life and much, much more. But a more concerted effort by scientists to consider the influence of climate change on these conflicts could help us anticipate when these conflicts occur — maybe even avoid them.

How many studies of human-wildlife conflict make a connection to climate change?

We’ve been looking in the scientific literature and government reports. At most we see a few dozen. But these are disparate incidents, studied and reported in isolation, and it’s hard to compare them to one another. Some are anecdotal, like the report in Botswana. Others make more direct connections between environmental conditions and human-wildlife contact, like the whale entanglements. I’m hopeful because we’re seeing more and more governing bodies recognizing this connection, including very recently the International Union for Conservation of Nature. But there hasn’t been this direct recognition by the broader scientific community that climate change is going to fuel more intense and more frequent human-wildlife conflicts.

Why do you think more studies haven’t considered the role of climate?

I think it’s such a complex process. There is so much that goes into creating those conflicts. Understanding them involves understanding the ecosystem, as well as the social or economic drivers that lead people to use space or resources that put them into competition with animals. Human relationships or attitudes to wildlife play a huge role as well, in terms of how much tolerance people have for coming into contact with wildlife, and how they respond to those encounters and potential property damage or economic loss from wildlife.

What are some ways that climate factors influence human-wildlife conflicts?

A lot of the cases we’ve seen are a clear rise in conflict either during or just after an extreme climate event, like the marine heatwave that fueled a rise in whale entanglements off the West Coast or the rise in human-wildlife conflicts during and after the severe drought in Botswana.

But we also see a rise in conflicts due to climate variability. A two-decade study in New Mexico reported that the frequency of black bears coming into contact with humans and livestock fluctuates with the El Niño/La Niña cycle. Basically, La Niña creates drought conditions for bears, and they’ll wander more widely for food and exploit alternative food resources – and then you see greater reports of bears coming into contact with livestock, damaging property and digging through garbage.

Long-term climate shifts also create conflict. In India, long-term climate change has reduced the amount of preferred vegetation for blue sheep, or bharal, which have moved into lower elevations to feed on human crops. That’s a conflict in itself, but the movement of bharal has also drawn down snow leopards, which creates additional problems.

What are some of the lesser-known consequences of human-wildlife conflicts?

Lots of studies have looked at human-wildlife conflicts — outside of climate change — and their long-term consequences. In parts of Western and Central Africa, studies have linked the rise of baboon populations, whose predators have been exterminated by people, with a rise in child labor. Baboons can be very aggressive and can raid crops, and in response children were pulled out of school to guard agricultural fields.

These conflicts can also fuel the rise of diseases. In the U.S., removing pumas led to an explosion of deer populations, which in turn fueled a rise in Lyme disease. You can also see new diseases emerge, because when humans and wildlife come into closer contact there are opportunities for diseases to jump from animals to people.

Oh my gosh, yes! There are so many good examples, and there’s a rich literature around conflict mitigation techniques. One creative method piloted by some of my colleagues in Botswana involves painting fake eyes on the back end of cattle, because predators are less likely to attack something that’s looking at them directly.

Elephants can sometimes move into agricultural areas to forage on crops. Researchers have found that putting up bee hive “fences” can actually deter this.

What about efforts to mitigate human-wildlife conflicts caused by climate change?

The clearest example that comes to mind of something actually being implemented is for the whale entanglements off of the West Coast. In that situation, there was a clear link between oceanographic conditions, animal behavior and human behavior. The California Department of Fish and Wildlife, which regulates the Dungeness crab fishery, began to take real-time oceanographic conditions into account when deciding the start and end dates for the Dungeness crab fishing season. This is a concerted effort to try to proactively reduce the chances of whale entanglements in nets, and to me it is a gold standard for a policy that takes climate variability into account.

But with research, there is potential to develop more mitigation efforts. If you know a certain conflict will rise in an El Niño year, for example, you could have a conflict-reduction policy in place and ready to implement when forecasts show an El Niño forming.

There are also some exciting artificial intelligence efforts underway to predict when conflicts are likely to occur. These can help forewarn wildlife managers and ordinary citizens, so that they can be proactive in taking steps to avert conflict. But these efforts don’t currently take into account what the climate is doing. This seems like a perfect opportunity to fold in our growing understanding of how climate conditions may factor into conflict.

There are a lot of efforts under development or in place to mitigate human-wildlife conflicts, but they don’t currently take climate into account. If good research can reveal the role of climate, it could be possible to modify those methods to make them responsive to environmental conditions. And really, reducing conflict is our goal here. The more that we know about when conflicts are more likely to occur, the more we can prepare for those conflicts or intervene to avoid them altogether.

Link to full release with images and video: