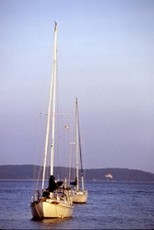 Rising seas could trigger an economic cascade in Maryland.

Newswise — Climate change will cost the Maryland economy billions of dollars, and the state is particularly vulnerable to a "cascade" of economic consequences, says a new report from the University of Maryland's Center for Integrative Environmental Research (CIER). Even though the chief impact will come from rising sea levels along the state's coast, the researchers predict that the effects will be transmitted throughout the entire state's economy to a significant degree.

Combining existing data with new analysis, the CIER report, Climate Change Impacts on Maryland and the Cost of Inaction, concludes that the costs have already begun to accrue and will likely endure, though future interventions that limit climatic changes can ultimately reduce the total bill.http://cier.umd.edu/climateadaptation/

"The pain will be felt statewide," says University of Maryland public policy professor Matthias Ruth, who coordinated the research and directs the Center for Integrative Environmental Research. "Maryland's highly integrated economy, growing population and extensive, interconnected infrastructure make it very vulnerable to widespread direct and ripple economic effects. The economic data simply don't exist yet to project a precise bottom line, but the trend is clear " it will cost Maryland and the nation billions, and inaction or delayed action will only add to the cost."

Ruth and his team conducted the research for the Maryland Commission on Climate Change. The report appears as a prefatory chapter in the Commission's Climate Action Plan, which was transmitted to Governor O'Malley in late August.http://www.mde.state.md.us/Air/climatechange/index.asp

--"The growing and interconnected nature of the State could potentially make it more vulnerable to the cascade effects of climate change if there isn't a strong effort now to stimulate a resilient and robust economy that can cope with the expected impacts of climate change."

--"The State's economy is particularly vulnerable because of the scale of development along the coast and the high rate at which coastal erosion and subsequent water elevation will afflict its shoreline."

--Climate change may reduce the quality and quantity of fresh drinking water. "One tactic for maintaining water quality is to encourage streamside tree planting and plant buffer strips."

1. "There are already considerable costs to society associated with infrastructures, agricultural and silvicultural practices, land use choices, transportation and consumptive behaviors that are not in sync with past and current climatic conditions. These costs are likely to increase as climate change accelerates over the century to come."

2. "While some of the benefits from climate change may accrue to individual farms or businesses, the cost of dealing with adverse climate impacts are typically borne by society as a whole. These costs to society will not be uniformly distributed but felt most among small businesses and farms, the elderly and socially marginalized groups."

3. "Benefits from climate change may be fleeting - for example, climate does not stop changing once a farm benefited from temporarily improved growing conditions. In contrast, costs of inaction are likely to stay and to increase."

4. "Climate models and impact assessments are becoming increasingly refined...Yet, little consistency exists among studies to enable 'summing up'impacts and cost figures across sectors and regions to arrive at a comprehensive, state-wide result."

5. "To provide not just a comprehensive statewide assessment of impacts and cost, but to develop optimal portfolios for investment and policy strategies will require support for integrative environmental research that combines cutting-edge engineering solutions with environmental, economic and social analysis. The effort and resources required for an integrative approach will likely pale in comparison to the cost of inaction."

A copy of the complete CIER study (and related research) is available online: http://cier.umd.edu/climateadaptation/.

This past July, Ruth and his team released a similar analysis for ten states around the nation. http://cier.umd.edu/climateadaptation/

Last year, Ruth conducted a similar nationwide analysis and concluded that the total economic cost of climate change in the United States will be major and affect all regions, though the cost remains uncounted, unplanned for and largely hidden in public debate.http://www.newsdesk.umd.edu/sociss/release.cfm?ArticleID=1521