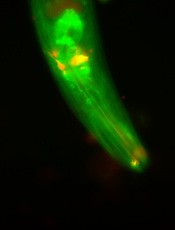 The enzyme WWP-1, shown in green, is a key player in the signaling cascade that links dietary restriction to longevity in roundworms. Sensory neurons are shown in red.

Newswise — Experiment after experiment confirms that a diet on the brink of starvation expands lifespan in mice and many other species. But the molecular mechanism that links nutrition and survival is still poorly understood. Now, researchers at the Salk Institute for Biological Studies have identified a pivotal role for two enzymes that work together to determine the health benefits of diet restriction.

When lacking one enzyme or the other, roundworms kept on a severely calorie-restricted diet no longer live past their normal lifespan, they report in the June 24, 2009, advance online edition of the journal Nature.

"The only other known factor regulating longevity in response to diet restriction operates at the very end of the signaling cascade," said Howard Hughes Medical Investigator and senior author Andrew Dillin, Ph.D., an associate professor in the Molecular and Cell Biology Laboratory. "These two enzymes are further up the ladder, bringing us closer to the receptor that receives the signal for throwing the switch to promote a healthy lifespan."

Identifying the receptor may allow researchers to design drugs that mimic the signal and could lead to new treatments for age-related diseases. This could enable us to reap the health benefits of calorie restriction without adhering to extreme diets in which the satisfying feel of a full stomach is strictly off limits.

Although lifestyle factors such as obesity clearly influence life expectancy, genetic factors are considered central to the process of aging. To date, there are only three known genetic networks that ensure youthfulness when manipulated. One centers on the insulin/insulin growth factor-1, which regulates metabolism and growth; the second is driven by mitochondria, the cell's power plants; and the third is linked to diet restriction.

But first author Andrea C. Carrano, Ph.D., a postdoctoral researcher in American Cancer Society Professor Tony Hunter's laboratory, hadn't set out to unravel the molecular connection between dietary restriction and increased lifespan when she started to investigate the role of the mammalian enzyme WWP-1. "I only knew that WWP-1 was a ubiquitin ligase and that mammalian cells contain three copies, which would make it difficult to study its function."

Ubiquitin ligases work in tandem with so called ubiquitin-conjugating enzymes to attach a chain of ubiquitin molecules to other proteins. This process, called ubiquitination, flags protein substrates for destruction but can also serve as a regulatory signal.

Since the laboratory roundworm Caenorhabditis elegans only contains one copy, Carrano teamed up with Salk researcher Dillin, who studies aging and longevity in C. elegans. Initial experiments revealed that worms without the WWP-1 gene seemed normal but were more susceptible to various forms of stress. "This finding was the first hint that WWP-1 might play a role in the aging process since mutations that affect stress very often correlate with longevity," she says.

Prompted by the findings, Carrano's next set of experiments focused on WWP-1's potential role in the regulation of lifespan. When she genetically engineered worms to overexpress WWP-1, well-fed worms lived on average 20 percent longer. Deleting PHA-4, which was discovered in Dillin's lab and so far is the only gene known to be essential for lifespan extension in response to diet restriction, abolished the life-extending effects of additional WWP-1 placing the ubiquitin ligase as a central rung on the same genetic ladder as PHA-4. Without WWP-1, cutting down on calories no longer staved off death.

When a study by others found that UBC-18 interacts with WWP-1, Carrano wondered whether it could play a role in diet-restriction-induced longevity as well. She first confirmed that the UBC-18 functions as an ubiquitin-conjugating enzyme and gives WWP-1 a hand. She then tested whether it played a role in lifespan regulation. "Overexpression of UBC-18 was not enough to extend the lifespan of worms but depleting it negated the effects of caloric restriction," says Carrano, who is busy looking for potential substrates of the UBC-18-WWP-1 ubiquitination complex.

"The WWP-1 pathway is highly conserved between worms and mammals and could play a role in the human aging process," says senior author Tony Hunter, Ph.D., a professor in the Molecular and Cell Biology Laboratory. "We didn't expect that this protein would be involved in the regulation of lifespan but it is very exciting when experiments lead you in a surprising direction."

For information on the commercialization of this technology, please contact Dave Odelson at 858.453.4100, x 1223 (dodelson@salk.edu) in the Salk Office of Technology Management and Development.

This work was supported by the National Institutes of Health, the Ellison Medical and Glenn Medical Foundations, the American Cancer Society and the Rossi Endowment.

Zheng Liu, Ph.D., a research associate, in the Dillin Laboratory also contributed to the work.

The Salk Institute for Biological Studies is one of the world's preeminent basic research institutions, where internationally renowned faculty probe fundamental life science questions in a unique, collaborative, and creative environment. Focused on both discovery and mentoring future generations of researchers, Salk scientists make groundbreaking contributions to our understanding of cancer, aging, Alzheimer's, diabetes, and cardiovascular disorders by studying neuroscience, genetics, cell and plant biology, and related disciplines.