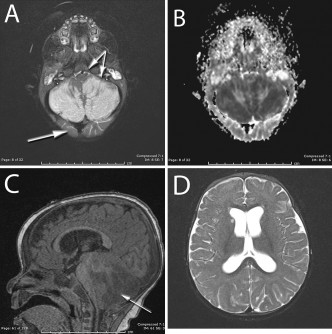 Newswise — Charlottesville, VA (August 15, 2017). Perhaps the saddest drug abuse stories are about unsuspecting children who inadvertently ingest dangerous substances in the home. Fortunately, the case described in this report has a happy ending due to fast action on the part of the response team and pediatric emergency physicians and neurosurgeons. Detailed information on the case can be found in the article, “Severe bilateral cerebellar edema from ingestion of ketamine: case report,” by Nicolas Villelli, MD, and colleagues, published today in the Journal of Neurosurgery: Pediatrics (http://www.thejns.org/doi/full/10.3171/2017.5.PEDS16695).

Background. Ketamine is a medical drug administered to humans (including children) and animals to induce sedation and anesthesia. Its euphoric and dissociative side effects have made it attractive to people seeking recreational drug highs. A ketamine overdose can have serious consequences, and the drug has been implicated in deaths—some due to physiological responses to the drug alone and some caused by risky behaviors brought on by the drugged state.

The Article. The authors recount the case of a 10-month-old baby girl who was found in an unresponsive state along with her brother and grandmother. Initially, carbon monoxide poisoning was believed to be responsible. Not until later did the police determine that all victims had eaten from dishes previously used to soak tobacco leaves in ketamine for use as a recreational drug known as “Kommon.”

The child vomited after eating eggs from her dish and went to sleep. She was later found unresponsive by a family member who called for emergency services.  At the hospital, it was necessary to use emergency intubation and ventilation for the child’s poor breathing. She was minimally responsive and displayed abnormally high muscle tone.

Imaging studies revealed severe swelling in the cerebellar hemispheres. This was blocking the normal flow of cerebrospinal fluid, causing a situation that could be rapidly fatal. The upper part of the brain seemed spared from damage. This set of findings was unusual, because most of the time the upper part of the brain is damaged from lack of oxygen and the cerebellum is spared. This reversal of the expected findings suggested a specific association with the drug that was ingested.

The patient received emergency placement of a drain to divert the spinal fluid, followed by surgical decompression to allow more room for the swelling and to reduce the pressure on the brain.

The patient’s neurological condition slowly improved, and artificial ventilation was removed six days postoperatively. At two weeks postoperatively, the infant was able to participate in rehabilitation exercises and the external ventricular drain was replaced with a cerebrospinal fluid shunt. Six months after the injury, although imaging studies showed permanent damage to the cerebellum, the child’s clinical recovery was remarkable. Her muscle coordination was normal and, other than a slight speech delay, she was meeting all appropriate developmental milestones.

Prior to this case report not much was known about the pediatric brain’s reaction to a ketamine overdose. The importance of this paper lies in the detailed description of the patient’s clinical features and the unexpected imaging findings.

In discussing the findings of this study, the corresponding author, Dr. Daniel H. Fulkerson, MD, provided the following comment:

“We are very excited that the child has recovered well following this life-threatening event.  Unfortunately, we fear that cases like this will continue to occur, as we have seen a dangerous rise in drug use in our state and in the nation. Innocent kids are often affected. We hope this case shines some light on this particular exposure and helps other medical facilities recognize these unique findings.”

Disclosure: The authors report no conflict of interest concerning the materials or methods used in this study or the findings specified in this paper.

Founded in 1931 as the Harvey Cushing Society, the American Association of Neurological Surgeons (AANS) is a scientific and educational association with more than 8,300 members worldwide. The AANS is dedicated to advancing the specialty of neurological surgery in order to provide the highest quality of neurosurgical care to the public. All active members of the AANS are certified by the American Board of Neurological Surgery, the Royal College of Physicians and Surgeons (Neurosurgery) of Canada, or the Mexican Council of Neurological Surgery, AC. Neurological surgery is the medical specialty concerned with the prevention, diagnosis, treatment and rehabilitation of disorders that affect the entire nervous system including the brain, spinal column, spinal cord, and peripheral nerves. For more information, visit www.AANS.org.