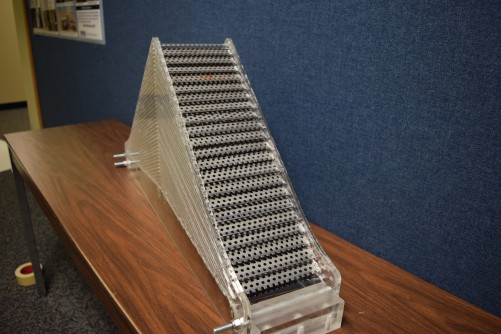 Newswise — WASHINGTON, D.C., May 10, 2018 -- Cloaking devices play a pivotal role in many sci-fi television programs. Scientists are now working to take this technology from the dramatic realm of science fiction and make it real. Amanda D. Hanford, at Pennsylvania State University, is taking the introductory steps to make acoustic ground cloaks. These materials redirect approaching waves around an object without scattering the wave energy, concealing the object from the sound waves.

During the 175th Meeting of the Acoustical Society of America, being held May 7-11, 2018, in Minneapolis, Minnesota, Hanford will describe the physics behind an underwater acoustic shield designed in her lab.

Hanford and her team set out to engineer a metamaterial that can allow the sound waves to bend around the object as if it were not there. Metamaterials commonly exhibit extraordinary properties not found in nature, like negative density. To work, the unit cell -- the smallest component of the metamaterial -- must be smaller than the acoustic wavelength in the study.

“These materials sound like a totally abstract concept, but the math is showing us that these properties are possible,” Hanford said. “So, we are working to open the floodgates to see what we can create with these materials.”

To date, most acoustic metamaterials have been designed to deflect sound waves in air. Hanford decided to take this work one step further and accept the scientific challenge of trying the same feat underwater. Acoustic cloaking underwater is more complicated because water is denser and less compressible than air. These factors limit engineering options.

After multiple attempts, the team designed a 3-foot-tall pyramid out of perforated steel plates. They then placed the structure on the floor of a large underwater research tank. Inside the tank, a source hydrophone produced acoustic waves between 7,000 Hz and 12,000 Hz, and several receiver hydrophones around the tank monitored reflected acoustic waves.

Using linear coordinate transformation, the researchers were able to map the flat surface of the bottom of the tank and determined that space was compressed into two triangular cloaking regions consisting of the engineered metamaterial.

These results show potential to contribute to real-world applications, such as acoustic materials to dampen sound and appear invisible underwater.

The 175th Meeting of the Acoustical Society of America

In the coming weeks, ASA’s Worldwide Press Room will be updated with additional tips on dozens of newsworthy stories and with lay language papers, which are 300- to 500-word summaries of presentations written by scientists for a general audience and accompanied by photos, audio and video. You can visit the site during the meeting at http://acoustics.org/current-meeting/.

We will grant free registration to credentialed journalists and professional freelance journalists. If you are a reporter and would like to attend, contact Emilie Lorditch ([email protected], 301-209-3029), who can also help with setting up interviews and obtaining images, sound clips or background information.

A press briefing featuring a selection of newsworthy research will be webcast live from the conference on Tuesday, May 8, 2018; register at http://aipwebcasting.com/webcast/registration/518asa.php to watch online. Topics and times to be announced.