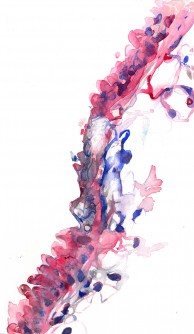 Newswise — A specialized subset of lung cells can shake flu infection, yet they remain stamped with an inflammatory gene signature that wreaks havoc in the lung, according to a study published in The Journal of Experimental Medicine

Seasonal flu is caused by influenza virus, which can infect a variety of cell types in the lung. Infected cells are typically destroyed by the virus itself or by immune cells that attack infected cells. The resulting inflammation can linger on long after the virus has been eliminated leading to persistent symptoms and, in some cases, severe tissue damage.

Club cells are specialized cells that normally protect against inhaled microbes and pollutants. However, researchers from the Icahn School of Medicine at Mount Sinai in New York show that club cells are bad guys during flu infection. Although they are able to rid themselves of the flu virus, club cells fail to switch off expression of inflammatory genes causing prolonged pathology in the lungs even after the virus has been contained. Depletion of surviving club cells lessened destructive lung damage in flu-infected mice.

The authors confirm that human club cells show a similar inflammatory response to flu infection, so targeting club cells might be a strategy to shorten the duration of flu symptoms in humans.

Heaton, N.S., et al. 2014. J. Exp. Med. doi:10.1084/jem.20140488 About The Journal of Experimental MedicineThe Journal of Experimental Medicine (JEM) is published by The Rockefeller University Press. All editorial decisions on manuscripts submitted are made by active scientists in conjunction with our in-house scientific editors. JEM content is posted to PubMed Central, where it is available to the public for free six months after publication. Authors retain copyright of their published works and third parties may reuse the content for non-commercial purposes under a creative commons license. For more information, please visit www.jem.org .

Research reported in the press release was supported by the Research Training Program in Molecular and Cellular Hematology, the Centers for Excellence for Influenza Research and Surveillance, and the National Institutes of Health.