One key to a healthy weight may lie deep inside the brain, in the endoplasmic reticulum of cells that produce the “grandfather” of appetite-regulating hormones 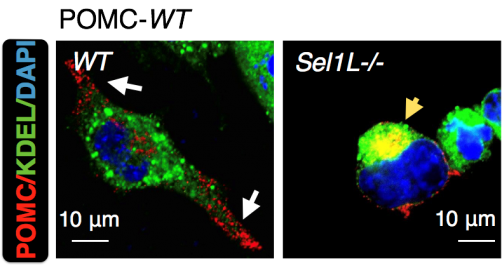 In normal neurons, POMC prohormone molecules (indicated by white arrows) are processed for release by the cells. But in mice with an impaired quality-control function in their endoplasmic reticulum, the molecules build up in the nucleus (yellow arrow). The mice overeat and become obese even on a low-energy diet.

Newswise — ANN ARBOR, Mich. -- Deep in the middle of our heads lies a tiny nub of nerve cells that play a key role in how hungry we feel, how much we eat, and how much weight we gain. Around the clock, they produce a “grandfather” form of several hormones that help us regulate these crucial functions.

Now, a new discovery by a team at the University of Michigan Medical School sheds new light on how that grandfather molecule gets produced – and more important, what can go wrong and raise the risk of overeating and obesity.

Published online in the Journal of Clinical Investigation, the findings could pave the way for new approaches to treating forms of obesity, especially those with genetic roots. They also improve the understanding of how the body controls the levels of hormones related to appetite and much more.

The grandfather hormone, or prohormone, is called pro-opiomelanocortin or POMC. After it’s produced by the cells in the region of the brain called the hypothalamus, it gets chopped up to make several important appetite-regulating hormones.

But the new research shows that before POMC can leave the cells that produce it, every single copy has to pass a kind of inspection. This ensures that poorly made POMC copies get cleared in a timely way.

The researchers show that the ERAD process in POMC neurons controls food intake and obesity by tightly regulating the amount of POMC released by the cells.  If ERAD fails, their experiments showed, most POMC molecules get clumped up and held inside the cell. That means far fewer appetite-regulating hormone molecules reaching the body.

The U-M experiments showed that mice with a broken ERAD system in their POMC neurons ate far more than usual, and gained weight rapidly, becoming obese – even though they were fed a low-energy diet.

“Our findings demonstrate that, surprisingly but unequivocally, the ERAD machinery plays a key role in normal physiology,” say Ling Qi, Ph.D., a professor in the U-M Department of  Molecular & Integrative Physiology who led the team. “These new revelations identify new elements in disease pathogenesis, and will help us design novel therapeutic approaches and targets for preventing and treating obesity.”

Knowing that a rare, severe form of childhood obesity arises from a mutation in the POMC gene, the researchers explored the relationship between ERAD and this mutation.

Humans with the mutation, called C28F, feel constant hunger and have complete lack of control over eating. They become severely obese in their early years.

The researchers found that mutated POMC molecules evade the ERAD quality control process and built up inside of the brain cells where they were made – getting in the way of the production of normal POMC.

Both cases — the mice with broken ERAD, and the patients with mutated POMC — surprisingly share the same underlying reasons: the built-up misfolded POMC molecules clump together and keep the entire hormone factory from running smoothly.

Strangely, the buildup didn’t cause the cells to die. They just didn’t pump out the POMC prohormone.

The researchers, including lead author Geun Hyang Kim, Ph.D., a postdoctoral fellow in the Qi lab, conclude that properly functioning ERAD provides a “safe space” for the cell to put finishing touches on its products, keeping the bad proteins from clumping together with the good ones.

This opens the door to new experiments with drugs that could boost the ERAD process in POMC-producing brain cells.

Exploring ERAD’s role in other prohormones

The researchers focused on POMC-producing cells in the brain region called the arcuate nucleus of the hypothalamus, and a pair of ERAD quality control molecules called Sel1L-Hrd1.

Qi and his colleagues last year showed that problems with ERAD affect production of another prohormone, proAVP, which is the grandfather of a hormone called vasopressin that regulates water balance in the body. Mice lacking ERAD in vasopressin-producing neurons develop a condition called diabetes insipidus, just like humans with the same condition.

“Whenever you generate mice exhibiting human disease-like phenotypes, you know you are working on something with fundamental importance,” he says. “The ultimate question for us is, can we manipulate this system to treat human diseases.”

For instance, he says, using the knowledge gained from these studies, a small-molecule drug might be developed to boost the activity of the ERAD machinery, to make sure prohormones gets handled correctly. The team is working with other U-M colleagues to test some of these ideas.