Clues to the Innate Drug Resistance of a Cocoa-Fermenting Pathogen 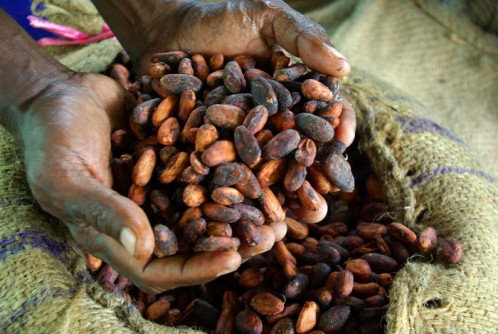 Newswise — At first glance, the yeast Candida krusei seems as innocuous as microbes come: it’s used for fermenting cocoa beans and gives chocolate its pleasant aroma. But it’s increasingly being found as a pathogen in immunocompromised patients—and C. krusei infections aren’t always easy to cure. This yeast is naturally resistant to fluconazole, a first-line antifungal that’s vital not just for treating many fungal infections but also for preventing them in susceptible populations. In the September issue of G3, Cuomo et al. unveil the first whole-genome sequence of a clinical sample of C. krusei, providing leads on genes that may be important for the species’ fluconazole resistance.Some draft assemblies of the C. krusei genome had been produced prior to these researchers’ work, but they were fragmented, a problem caused by a large amount of heterozygosity. The key to their success was to generate long sequencing reads, producing an assembly with not many more scaffolds than C. krusei has chromosomes.

With their new draft in hand, Brand et al. searched the C. kruseigenome for genes that are associated with pathogenesis in the more familiar Candida albicans—the cause of thrush, vaginal yeast infections, and sometimes potentially lethal systemic infections. C. krusei, they found, has few copies of gene families associated with pathogenesis in C. albicans, including oligopeptide transporters, aspartyl proteases, and phospholipase B genes. Candida species that often cause disease usually have expansions in these gene families, so given that C. krusei is rarely pathogenic, this finding makes sense.

When they focused on genes involved in drug resistance, the group found that C. krusei differs from C. albicans; many of the sites that are often mutated in the target of azole drugs in resistant C. albicans are not mutated in C. krusei. This implies the cocoa-fermenting yeast’s natural resistance to fluconazole arises from a different mechanism than the one that commonly allows C. albicans to resist azole drugs.

The researchers also didn’t find the gene MDR1, which encodes a drug transporter often responsible for resistance to multiple drugs. They did, however, find copies of genes related to CDR1, CDR2, and few others that encode other transporters associated with drug resistance—although the way they function in C. krusei is unknown. These genes could be a starting point for discovering the mechanisms behind antifungal resistance in C. krusei, potentially leading to better treatments and preventive measures for highly vulnerable populations.