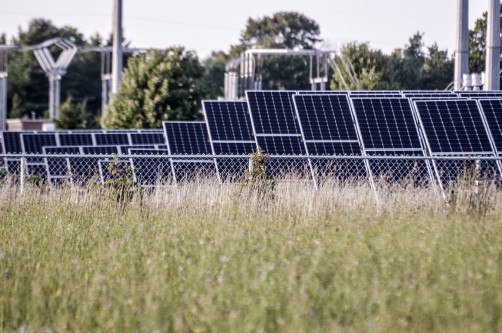 Researchers found that using bio-sequestration to capture carbon produced by U.S. coal-fired plants even after carbon capture and storage would require using 62 percent of the nation’s arable land for that process, or 89 percent of all U.S. land with average forest cover. 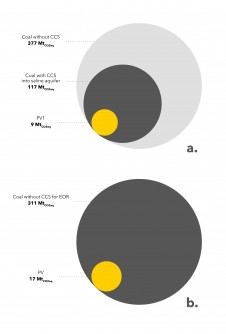 Newswise — How many fields of switchgrass and forests of trees would be needed to offset the energy produced by burning coal? A lot, it turns out.

While demand for energy isn’t dropping, alarms raised by burning fossil fuels in order to get that energy are getting louder. Often suggested solutions to cancel out the effects of the carbon dumped into our atmosphere through carbon capture and storage or bio-sequestration. This zero-emission energy uses technical means as well as plants to take in carbon emissions and store it. Another route is to use solar photovoltaics to convert sunlight directly into electricity and only sequester the carbon emissions from the production of solar cells.

The Giving Tree Won’t Give Enough for Carbon Neutral Coal

Zero-emission energy has been offered as a way to offset the carbon dioxide production while still maintaining coal’s electricity generation. That’s done through carbon capture and storage in saline aquifers or using enhanced oil recovery as well as bio-sequestration by planting trees and other plants to suck up and store carbon.

In a new study published in Scientific Reports, a Nature publication, Michigan Technological University researchers looked at how much land would be required to offset greenhouse gases created by traditional coal-fired plants or coal-fired plants with carbon sequestration and then neutralizing the remaining carbon pollution with bio-sequestration. Then it compared these routes to how much bio-sequestration would be required to offset greenhouse gases produced when making solar panels.

For the first time, researchers have shown that there is no comparison. It’s not even close. Coal-fired power plants require 13 times more land to be carbon neutral than the manufacturing of solar panels. We’d have to use a minimum of 62 percent of U.S. land covered by optimal crops or cover 89 percent of the U.S. with average forests to do it.

“We know that climate change is a reality, but we don’t want to live like cavemen,” says Joshua Pearce, professor of material sciences and electrical engineering at Michigan Tech. “We need a method to make carbon neutral electricity. It just makes no sense whatsoever to use coal when you have solar available, especially with this data.”

Coal-Fired Power Plant Emissions are Too Big to Solve

A one-gigawatt coal-fired plant would require a new forest larger than the state of Maryland for all of its carbon emissions to be neutralized.

They found that applying the best-case bio-sequestration for all the greenhouse gases produced by coal-fired power plants would mean using 62 percent of the nation’s arable land for that process, or 89 percent of all U.S. land with average forest cover. A one-gigawatt coal-fired plant would require a new forest larger than the state of Maryland for all of its carbon to be neutralized without CCS.

“If your goal is to make electricity without introducing any carbon into the atmosphere, you should absolutely not do a coal plant,” he says. Not only is it not realistic to capture all the carbon dioxide they release, but burning coal also puts sulfur dioxide and nitrous oxide and particulates in the air. They cause air population, which is already estimated to cause 52,000 premature deaths per year.

Pearce says that, in these calculations, he and his team were generous to coal-fired power plants in how efficient carbon capture and storage could ideally be when scaled up. They also did not consider new ways that solar farms are being used to make them even more efficient, like using higher efficiency black silicon solar cells, putting mirrors in between rows of panels so that the light that falls between them would also be absorbed, or planting crops between rows (agrivoltaics) to get the most use out of the land dedicated to solar panels that they can.

Resources should be put towards improving the efficiency of solar panels and of solar farms, he says, not carbon capture of fossil fuel-powered plants in an attempt to become zero-emission energy, not when this data shows it isn’t realistic to make big difference in protecting our changing climate. 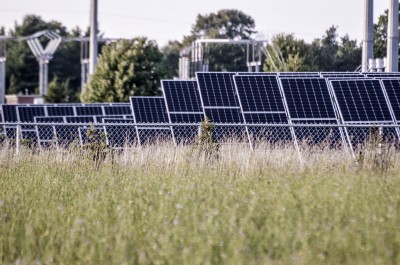 Caption: Researchers found that using bio-sequestration to capture carbon produced by U.S. coal-fired plants even after carbon capture and storage would require using 62 percent of the nation’s arable land for that process, or 89 percent of all U.S. land with average forest cover. 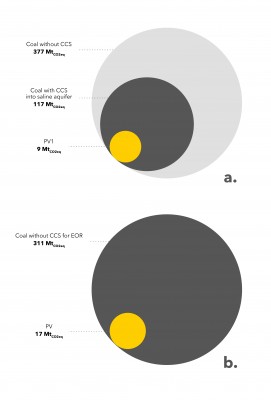