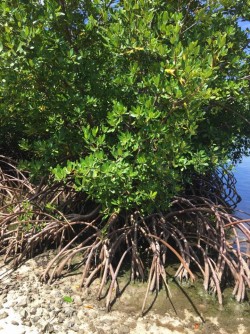 Mangroves, such as these black mangroves photographed in Jobos Bay, Puerto Rico, excel at capturing and storing carbon. They also protect coastal communities from storms and flooding while providing important fishery habitat. 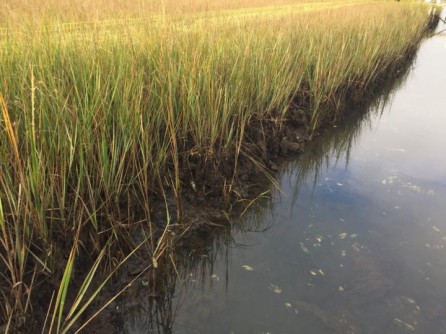 Salt marshes, such as this one in the Waquoit Bay National Estuarine Research Reserve in East Falmouth, Massachusetts, capture and store large amounts of carbon dioxide from the atmosphere every year. 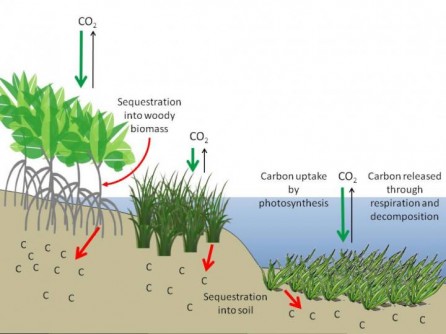 Credit: Howard et al., 2017, Frontiers in Ecology and the Environment

This figure illustrates the efficiency of (L-R) mangrove forests, salt marshes and seagrass beds as reservoirs for carbon. More carbon dioxide is taken up from the atmosphere (green arrows) than is re-released (black arrows), while a substantial amount is stored in soils (red arrows) for hundreds to thousands of years if left undisturbed.

Newswise — In the global effort to mitigate carbon dioxide levels in the atmosphere, all options are on the table--including help from nature. Recent research suggests that healthy, intact coastal wetland ecosystems such as mangrove forests, tidal marshes and seagrass meadows are particularly good at drawing carbon dioxide from the atmosphere and storing it for hundreds to thousands of years.

Policymakers are interested to know whether other marine systems--such as coral reefs, kelp forests, phytoplankton and fish--can mitigate climate effects. A new analysis co-authored by a University of Maryland scientist suggests that, while coastal wetlands serve as effective "blue carbon" storage reservoirs for carbon dioxide, other marine ecosystems do not store carbon for long periods of time.

The research paper, published February 1, 2017 in the journal Frontiers in Ecology and the Environment, also notes that coastal wetlands can help protect coastal communities from storm surges and erosion. Coastal wetland areas are easier for governments to manage compared with ecosystems that reside in international waters, further adding to the strategic value of coastal wetlands in the fight against climate change.

"We compared many different coastal ecosystems and have made a clear case for including coastal wetlands in discussions about greenhouse gas mitigation," said Ariana Sutton-Grier, an assistant research scientist at UMD's Earth System Science Interdisciplinary Center and a co-lead author of the research paper. "Coastal wetlands store a lot of carbon in their soils and are important long-term natural carbon sinks, while kelp, corals and marine fauna are not."

The research paper integrates previous data on a variety of coastal and marine ecosystems to determine which systems are best suited to mitigate climate effects. To make this assessment, Sutton-Grier and her colleagues evaluated how effectively each ecosystem captures carbon dioxide--for example, by plants using it to build their branches and leaves--and how long the carbon is stored, either in plant tissues or in soils.

Coastal wetlands outperformed other marine systems in just about every measure. For example, the researchers estimated that mangrove forests alone capture and store as much as 34 million metric tons of carbon annually, which is roughly equivalent to the carbon emitted by 26 million passenger cars in a year. Estimates for tidal marshes and seagrass meadows vary, because these ecosystems are not as well mapped globally, but the total for each could exceed 80 million metric tons per year.

All told, coastal wetlands may capture and store more than 200 metric tons of carbon per year globally. Importantly, these ecosystems store 50-90 percent of this carbon in soils, where it can stay for thousands of years if left undisturbed.

"When we destroy coastal wetlands, for coastal development or aquaculture, we turn these impressive natural carbon sinks into additional, significant human-caused greenhouse gas sources," said Sutton-Grier, who is also an ecosystem science adviser for the National Ocean Service at the National Oceanic and Atmospheric Administration.

The researchers' goal is to help inform resource managers and policymakers where to focus their limited resources to have the greatest impact on climate mitigation. The new analysis acknowledges that other ecosystems, such as coral reefs and kelp forests, provide valuable storm and erosion protection, key fish habitat and recreation opportunities, and thus deserve protection. But their capacity to store carbon over the long term is limited.

"A common question I get from coastal managers and other stakeholders is whether oyster reefs, coral and kelp are effective 'blue carbon' habitats," said Stefanie Simpson, a co-author of the paper and manager of the Blue Carbon program at the nonprofit organization Restore America's Estuaries. "This paper highlights the role all of these ecosystems have in the carbon cycle, while calling out our coastal habitats--marsh, seagrass and mangroves--for their role as significant and long-term carbon stores."

Researchers have often looked to terrestrial forests as carbon sinks as well. But most forests do not store substantial amounts of carbon in their soils. As such, the researchers believe that coastal "blue carbon" habitats may stand alone as the most efficient biological reservoirs of stored carbon on Earth.

"The concept of 'blue carbon' has focused scientists and stakeholders on the tremendous potential of managing marine ecosystems for climate mitigation," said Patrick Megonigal, associate director for research at the Smithsonian Environmental Research Center, who reviewed an early draft of the manuscript but was not directly involved in the work. "This analysis takes a big step forward by explaining why coastal wetland ecosystems are particularly attractive for carbon-based management."

This work was supported by the National Oceanic and Atmospheric Administration (Award No. NA14NES4320003), the Nature Conservancy, the German Federal Ministry for the Environment, Nature Conservation and Nuclear Safety, the International Union for the Conservation of Nature, and the Prince Albert II de Monaco Foundation. The content of this article does not necessarily reflect the views of these organizations.

The College of Computer, Mathematical, and Natural Sciences at the University of Maryland educates more than 7,000 future scientific leaders in its undergraduate and graduate programs each year. The college's 10 departments and more than a dozen interdisciplinary research centers foster scientific discovery with annual sponsored research funding exceeding $150 million.

Frontiers in Ecology and the Environment