Newswise — Surprisingly low concentrations of toxic chemicals – from fungicides to antidepressants – can change the way some aquatic creatures swim and feed, according to new research.

In addition, depending on the cocktail of toxins they can produce unexpected results.

The scientists behind the research, from the Universities of Barcelona and Portsmouth, call for the need to consider low dose and mixture toxicity testing in risk assessment of chemicals entering our aquatic environments.

The research is published in the journal Environmental Pollution.

One of the authors, Professor Alex Ford, of Portsmouth’s Institute of Marine Biology, said: “Most of the world’s urban waterways receive a cocktail of pollutants from agricultural run-off to human sewage containing sometimes high concentrations of medicines like antidepressants.

“Such cocktails may stop short of killing marine species, but we are concerned at what sub-lethal effects certain pollutants maybe having. There can be thousands of different chemicals in our rivers and seas, from agricultural run-off to sewage effluent, and though they stop short of being lethal, these contaminants can damage the health of aquatic ecosystems.

“These findings underline the importance of understanding and knowing the impact of complex mixtures of pollutants are having. One of the great conundrums for environmental toxicologists is how can we possibly determine or predict the effects of every combination of chemicals when there are simply thousands released into the environment, many of which have had quite limited toxicity assessment.”

The researchers examined the effect of low levels of two pollutants – an antidepressant and a fungicide – on amphipods, shrimp-like creatures in the laboratory.

Professor Ford said: “The main finding and it surprised us was that there were effects on the amphipods’ feeding and swimming speed at even very low levels of pollution. The fungicide test is interesting because it’s used in a lot of agriculture and in our medicated shampoos and creams. Our little shrimp prefer to eat leaf litter in the river beds after they have been broken down by fungus. By having all the fungicides in the water it was thought the leaves would be less palatable to the amphipods as they haven't been broken down by fungus – and they were, but antidepressants also made them eat less, which we hadn’t predicted.

“Our swimming analysis demonstrated that the animals swam faster after being exposed to either the fungicide or the antidepressant, but when they were subjected to both, as so often happens in the natural environment, the cocktail made them swim more slowly.

“Altering swimming or feeding may have knock-on effects in the growth, reproduction and survival of these creatures which are important to the food chain.”

Fungicides sprayed on crops including rice, oats, wheat, potato, garlic and citrus fruits has been found in high levels in waterways in Europe, Asia, Australia and South America.

Antidepressants have been found routinely in urbanised rivers throughout the world and in marine and freshwater environments. They enter the aquatic environment after not being fully broken down in our sewage treatment processes. Recent studies have shown they can accumulate in the brains of some fish.

Toxicity tests for new compounds are routine, but until now little was known about the effects of mixtures of different toxins.

Professor Ford said: “The way an animal feeds and moves is a sensitive way of detecting the sub-lethal impact on individual organisms which are likely to be relevant elsewhere in the food chain and through our entire ecosystem.”

Professor Ford’s previous research has shown that antidepressants can make small crustaceans spend more time swimming in the light which may increase their chances of predation.

1 x image of laboratory experiments with the shredder Gammarus pulex to detect effects of pollutants.

1x a heatmap of the Gammarus pulex behavioural activity 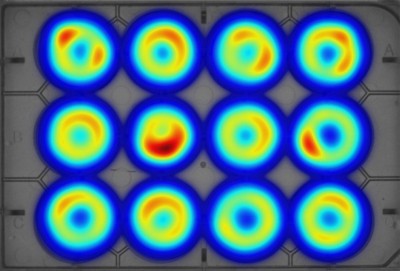 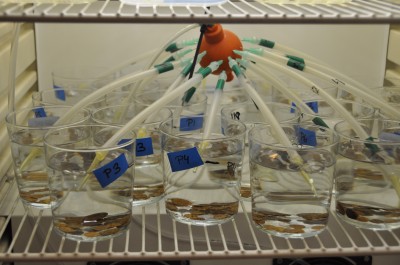 Caption: laboratory experiments with the shredder Gammarus pulex to detect effects of pollutants