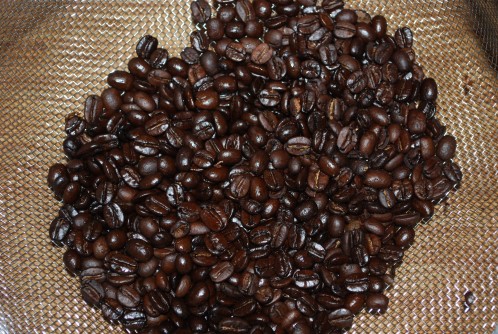 Newswise — WASHINGTON D.C., May 21, 2014 -- People around the world are drawn to coffee's powerful allure -- for its beloved smell and taste and for the caffeine boost it provides. As you enjoy your coffee beverage, however, odds are good you're probably not thinking about the coffee bean roasting process behind it.

But for some the love of coffee runs so deep that they go so far as to roast their own coffee beans. Controlling the roast time and temperature profile allows them to dial in the range of roast levels from light to dark, which greatly affects the style, flavor and aroma of the resulting beverage.

This drove Preston S. Wilson, a coffee aficionado and acoustician who normally focuses on studying underwater acoustics in his role as an associate professor in The University of Texas at Austin's Cockrell School of Engineering, to explore the potential of using the "cracking" sounds emitted by coffee beans during the roasting process -- as the basis for an automated acoustical roast monitoring technique.

As Wilson reports in the Journal of the Acoustical Society of America -- Express Letters, he found three parameters of the crack sound that could be exploited. Near the end of the roasting process, sounds known as "first crack" exhibit higher acoustic amplitudes than the "second crack" sounds that are emitted later. Finally, the rate of cracks in the second crack chorus is higher than the rate in the first crack chorus.

Initially, Wilson's unfunded project was just to "satisfy his own interest as a person who roasts coffee," but a commercial application may emerge for the coffee roasting industry.

An automated acoustical roast monitoring technique "could lead to optimized coffee roasting, which would increase quality, decrease errors in roasting, and potentially save energy used to power the roasting process," he says.

Taking it to the next level and commercializing the process will "require quite a bit of effort -- engineering the design of the sensor system, the data acquisition and processing," Wilson adds. "It will require writing software to automatically process the sounds, and then integrating it into the control system."

The article "Coffee roasting acoustics" by Preston S. Wilson appears in the Journal of the Acoustical Society of America -- Express Letters. See: http://dx.doi.org/10.1121/1.4874355

ABOUT THE JOURNALSince 1929 The Journal of the Acoustical Society of America has been the leading source of theoretical and experimental research results in the broad interdisciplinary study of sound. See: http://scitation.aip.org/content/asa/journal/jasa