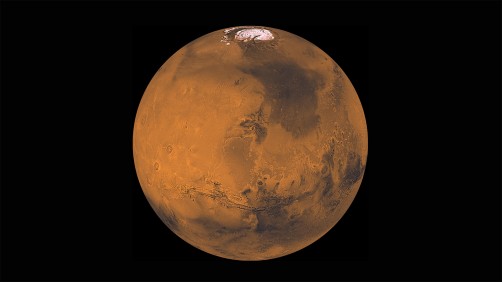 Newswise — With the brutal weather bearing down on the East Coast, media outlets such as CNN have reported a fun tidbit: it’s colder in parts of the United States than it is on parts of Mars.

Mark Salvatore, an assistant professor in the Department of Physics & Astronomy at Northern Arizona University, studies Mars and its most comparable environment on Earth—Antarctica. He talked to NAU News about what martian weather really looks like, why windstorms may be better on Earth’s nearest neighbor and what a day at 30 degrees below zero feels like.

What are the average high and low temperatures on Mars?

Average high temperatures on Mars this time of year (martian winter) are typically in the range of 0º F to -15º F, so there are certainly some parts of North America experiencing similar temperatures.

What are the average temperatures for Antarctica?

Temperatures vary widely. Palmer Station, which is just south of Chile and Argentina, is a coastal base located at 65º S latitude. Temperatures here range from an average of ~35º F in the summer months to an average of ~15º in the winter months. South Pole Station and the Russian Vostok Station, however, are located in the central portions of Antarctica at relatively high elevations (up on top of the large ice sheets). Because they are far from the coast and about as south as you can go, their summer temperatures are typically near -25º F and their winter temperatures are near -90º F. Pretty chilly!

What wind speeds are typical in Mars and on Antarctica?

Winds on Mars can be relatively strong, upwards of 50 mph or so. However, because Mars has a relatively thin atmosphere, the wind doesn't pack much of a "punch" like it does on Earth. There just aren't enough molecules of air moving at that speed as there would be on Earth. In Antarctica, winds can be pretty ferocious at times. Near the coast, where the elevation drops rapidly off of the polar ice cap, winds can accelerate downhill thanks to the influence of gravity, and can frequently exceed hurricane speeds. These winds are particularly nasty in that they carry along lots of blowing snow and sand (if in an ice-free area).

Besides different temperatures, how does martian winter compare to Earth? I’m guessing snow isn’t an issue, but are any types of storms seen on Mars?

See above regarding Mars’ storm systems. While there is no clear evidence for precipitation at the surface, instruments have detected virga higher in the atmosphere. Virga is snow that falls from clouds higher in the atmosphere, but sublimates away before reaching the surface. There are also seasonal dust storms on Mars, which form as a result of temperature differences on the surface that drive massive wind patterns. They often begin as small, local dust storms, and then enter a positive feedback loop that makes them bigger and more intense, often becoming global in scale.

During your time in Antarctica, how cold did it get?

We experienced some pretty cold temperatures in Antarctica when I was there. We routinely saw temperatures near -30º F (without wind chills factored in), but it would also occasionally surprise us and rise to near freezing at times. When temperatures reach -30º F or lower, it's hard to keep bare skin exposed to the elements. Within minutes, you start to feel the first signs of frostbite. It's also hard to keep your fingers and toes warm, so you'll often have to start jumping around or flapping your arms to promote blood flow and warm your extremities. When the wind is really blowing strong, there's not much you can do other than hunker down, escape the wind and try to stay as warm as possible.

Learn more about Mark’s research, including with NASA’s Mars Curiosity rover, and connect with him on Twitter.