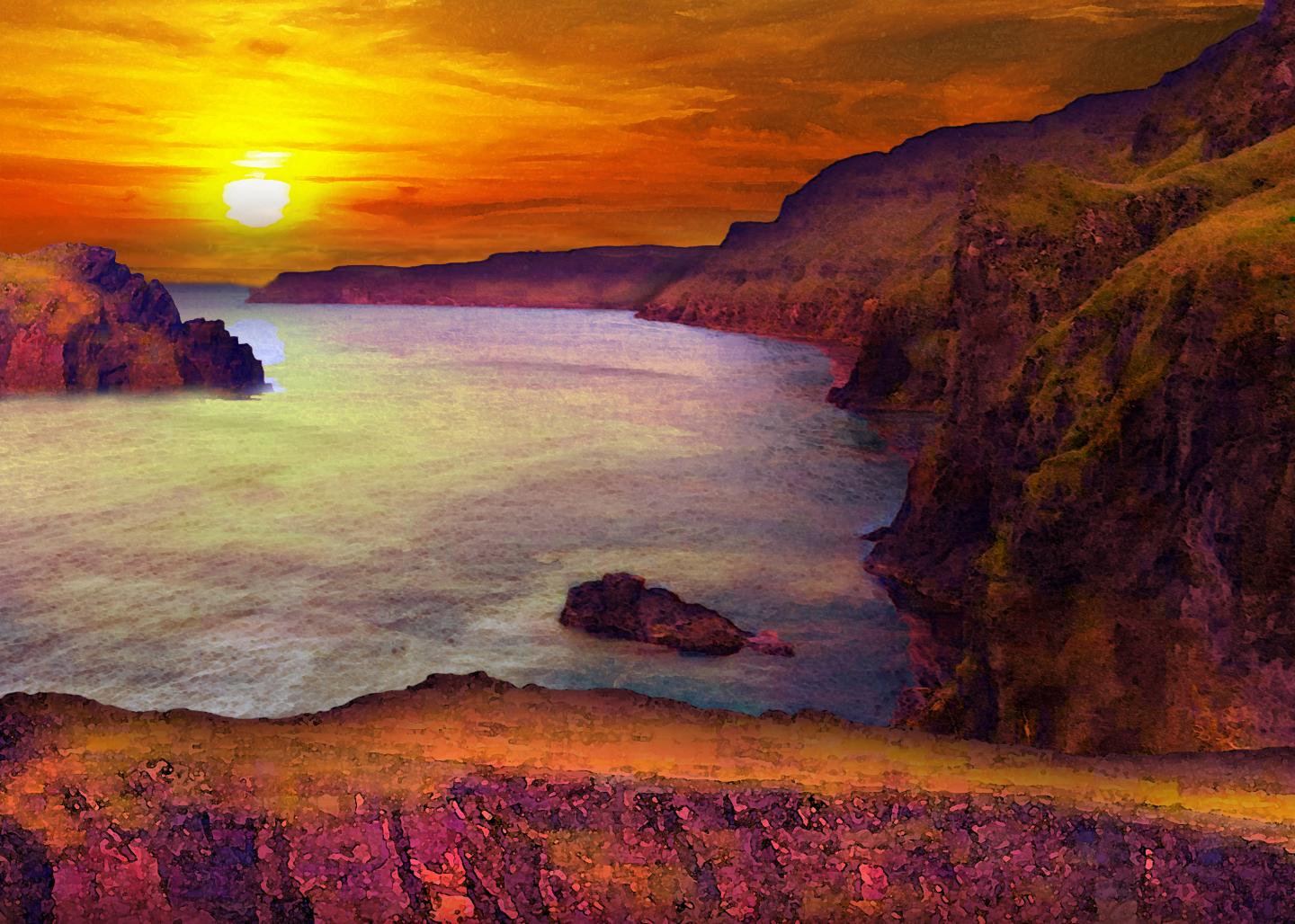 Artist's concept of GJ229Ac, the nearest temperate super-Earth to us that is in a system in which the host star has a brown dwarf companion. 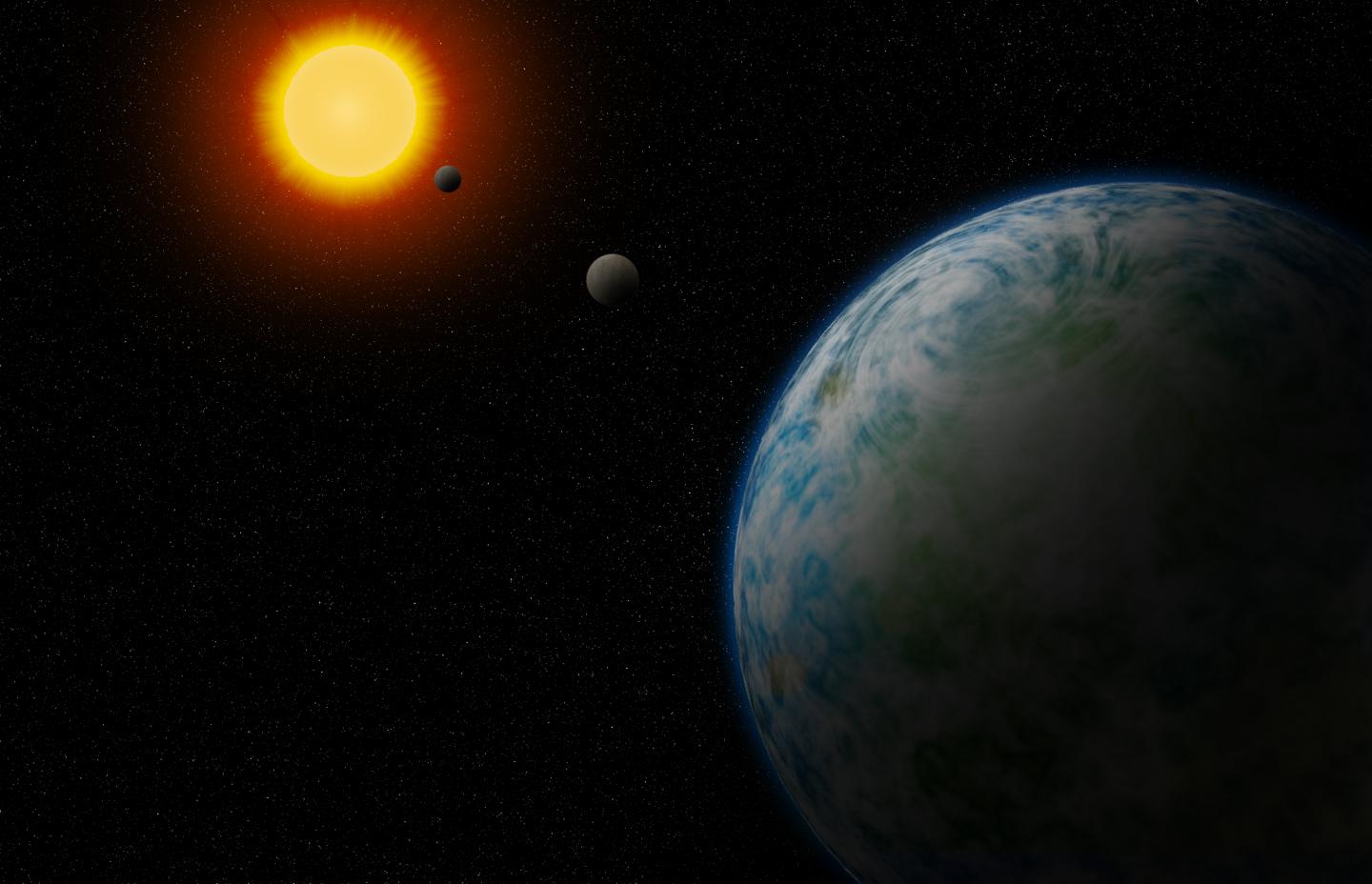 An artist's concept of GJ180d, which is the nearest temperate super-Earth to us that is not tidally locked to its star, making it more likely to be able to host and sustain life.

Newswise — Washington, DC-- A "cold Neptune" and two potentially habitable worlds are part of a cache of five newly discovered exoplanets and eight exoplanet candidates found orbiting nearby red dwarf stars, which are reported in The Astrophysical Journal Supplement Series by a team led by Carnegie's Fabo Feng and Paul Butler.

The two potentially habitable planets are orbiting GJ180 and GJ229A, which are among the nearest stars to our own Sun, making them prime targets for observations by next-generation space- and land-based telescopes. They are both super-Earths with at least 7.5 and 7.9 times our planet's mass and orbital periods of 106 and 122 days respectively.

The Neptune-mass planet--found orbiting GJ433 at a distance at which surface water is likely to be frozen--is probably the first of its kind that is a realistic candidate for future direct imaging.

The newfound worlds were discovered using the radial velocity method for finding planets, which takes advantage of the fact that not only does a star's gravity influence the planet orbiting it, but the planet's gravity also affects the star in turn. This creates tiny wobbles in the star's orbit that can be detected using advanced instruments. Due to their lower mass, red dwarfs are the primary class of stars around which terrestrial mass planets can be found using this technique.

Cooler and smaller than our Sun, red dwarfs--also called M dwarfs--are the most common stars in the galaxy and the primary class of stars known to host terrestrial planets. What's more, compared to other types of stars, red dwarfs can host planets at the right temperature to have liquid water on their surfaces on much closer orbits than those found in this so-called "habitable zone" around other types of stars.

"Many planets that orbit red dwarfs in the habitable zone are tidally locked, meaning that the period at which they spin around their axes is the same as the period at which they orbit their host star. This is similar to how our Moon is tidally locked to Earth, meaning that we only ever see one side of it from here. As a result, these exoplanets are a very cold permanent night on one side and very hot permanent day on the other--not good for habitability," explained lead author Feng. "GJ180d is the nearest temperate super-Earth to us that is not tidally locked to its star, which probably boosts its likelihood of being able to host and sustain life."

The other potentially habitable planet, GJ229Ac is the nearest temperate super-Earth to us located in a system in which the host star has a brown dwarf companion. Sometimes called failed stars, brown dwarfs are not able to sustain hydrogen fusion. The brown dwarf in this system, GJ229B, was one of the first brown dwarfs to be imaged. It is not known if they can host exoplanets on their own, but this planetary system is a perfect case study for how exoplanets form and evolve in a star-brown dwarf binary system.

"Our discovery adds to the list of planets that can potentially be directly imaged by the next generation of telescopes," Feng said. "Ultimately, we are working toward the goal of being able to determine if planets orbiting nearby stars host life."

"We eventually want to build a map of all of the planets orbiting the nearest stars to our own Solar System, especially those that are potentially habitable," added Carnegie co-author Jeff Crane.

This research effort--which also included Carnegie's Steve Shectman, John Chambers, Sharon Wang, Johanna Teske, Matías Díaz, and Ian Thompson, as well as Steve Vogt of U.C. Santa Cruz, Hugh Jones of University of Hertfordshire and Jennifer Burt of NASA's Jet Propulsion Laboratory--culled and reanalyzed data from the European Southern Observatory's Ultraviolet and Visual Echelle Spectrograph survey of 33 nearby red dwarf stars, which operated from 2000 to 2007 and was released in 2009.

"We have been led to this result by antique data," joked Butler.

Once targets were discovered in the UVES archives, the researchers used observations from three planet-hunting instruments to increase the precision of the data. The Carnegie Planet Finder Spectrograph (PFS) at our Las Campanas Observatory in Chile, ESO's High Accuracy Radial velocity Planet Searcher (HARPS) at La Silla Observatory, and the High Resolution Echelle Spectrometer (HIRES) at the Keck Observatory were all crucial to this effort.

"Combining the data from multiple telescopes increases the number of observations and the time baseline, and minimizes instrumental biases," Butler explained.

A companion paper featuring the re-analysis of the UVES search for planets around red dwarfs was recently published in The Astrophysical Journal.

Support for this work was provided in part by a NASA Hubble Fellowship.

Caption: Artist's concept of GJ229Ac, the nearest temperate super-Earth to us that is in a system in which the host star has a brown dwarf companion.

Caption: An artist's concept of GJ180d, which is the nearest temperate super-Earth to us that is not tidally locked to its star, making it more likely to be able to host and sustain life.