Study looked at ‘biggest conference rivals’ and found that Boise State was the most disliked program in 2009. 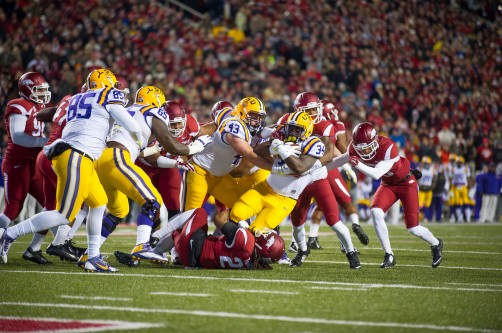 The Arkansas Razorbacks and LSU Tigers compete every year for the Golden Boot. A new study by researchers at both universities shows that the intensity of fans’ rivalrous feelings is not mutual.

If that analysis sounds like it came from an economist rather than an ESPN football commentator, that’s because it did.

“We wanted to look at what factors drive hostile feelings,” said Cary Deck, professor of economics in the Sam M. Walton College of Business at the University of Arkansas. “We thought people would be interested in knowing how strong different rivalries are, by an objective measure, but we also found it an interesting alternative setting to examine more general questions about how factors influence rivalrous feelings.”

Deck; Javier Reyes, professor of economics in the Walton College and vice-provost of distance education; and colleagues at the University of Arkansas at Little Rock and Louisiana State University will publish their study, “You Are Close to Your Rival and Everybody Hates a Winner: A Study of Rivalry in College Football” in a forthcoming issue of Economic Inquiry.

The researchers relied on data from the “College Football Conference Poll,” a 2009 Sports Illustrated survey about participants’ favorite Football Bowl Subdivision teams and conferences. The survey listed 12 collegiate conferences, independents and 120 participating schools. The questions pertained to fan devotion – the proportion of respondents who were season ticket holders, number of games attended each season, etc. – and the extent and relevance of activities such as tailgating, football traditions and television viewership.

The researchers focused primarily on one question: “Which school is your biggest conference rival?” Although this question allowed an analysis of many notable rivalries, Deck acknowledged that it also restricted analysis, because the respondents could not choose an out-of-conference team.

Using these data, the researchers considered two aspects of rivalrous feelings, uni-directional and bi-directional. Uni-directional feelings referred to fan rivalry between two schools. Fans of many schools may consider one school – the University of Southern California in the Pacific 12 Conference, for example – as a rival, but fans from this targeted school did not necessarily feel as strongly about the other schools. Deck said the data suggest that fans of less successful programs will target those, such as USC, that have had historic success.

Bi-directional rivalries are mutual relationships, whereby fans of two teams share intense feelings directed at each other. These rivalries tend to be programs in close proximity or in the same state and with comparable success historically, meaning they likely compete for the same resources – recruits, attendance and money.

“In this sense, college football corresponds to more general findings in rivalry literature,” Deck said. “Schools battle for resources, as do warring nations, siblings seeking attention from parents or companies competing for customers in similar markets.”

“This does not mean that feelings are stronger in Michigan than they are in Arizona,” Deck said. “It only means that the fan base’s feelings about each other are more aligned. In other words, Central Michigan fans’ dislike is concentrated on Western Michigan and vice versa, slightly more so than the mutual feelings of dislike between Arizona and Arizona State, because those fans also dislike USC.”

The most hated team in 2009, as measured on a uni-directional basis, was Boise State, which had experienced much more success that year than other teams in the Western Athletic Conference. Other teams that fans loved to hate, based purely on uni-directional analysis, were Brigham Young, West Virginia, Middle Tennessee State and Fresno State, all which had winning records that year.

In 2009, the other most intense, intra-conference rivalries were:• Brigham Young and Utah in the Mountain West• University of Pittsburgh and West Virginia in the Big East• Michigan and Ohio State in the Big Ten• Oklahoma and Texas in the Big 12.Of course, the irony here was that several of these teams have switched conferences or are no longer in a conference, as is the case with Brigham Young.

Which points to another finding. The researchers examined the 27 teams that switched conferences since 2009. They wanted to know if the concentration of rivalrous feelings or the intensity of a team’s rivalries influenced the decision to switch.

“We found no evidence to suggest these relationships mattered in a statistically significant way,” Deck said. “Instead, it appears that the movers, teams like Texas A&M and Missouri, went to more highly ranked conferences with higher earning potential, independent of what that meant for existing rivalries.”

More about the circumstances and background of this study can be found at the University of Arkansas research blog, http://researchfrontiers.uark.edu/2015/arkansas-vs-lsu-no-man-its-arkansas-vs-texas/.