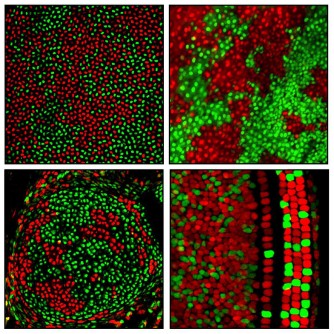 Patterns of X chromosome silencing in cells of the cornea, skin, cartilage and inner ear of mice. Cells are red or green depending on whether they have inactivated their maternal or paternal X chromosome, respectively. 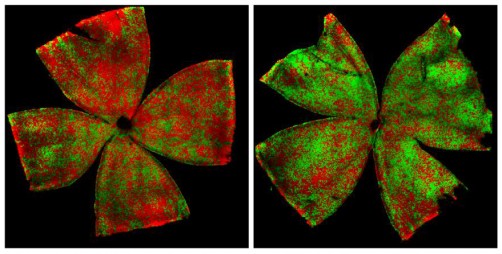 Differences in X chromosome silencing can greatly affect the same organ on different sides of the body. Shown are the left and right retinas from a single mouse. Cells are red or green depending on whether they have inactivated their maternal or paternal X chromosome, respectively.

Newswise — Producing brightly speckled red and green snapshots of many different tissues, Johns Hopkins researchers have color-coded cells in female mice to display which of their two X chromosomes has been made inactive, or “silenced.”

By genetically tagging different X chromosomes with genes that code for red or green fluorescent proteins, scientists say they can now peer into different tissue types to analyze genetic diversity within and between individual females at a new level of detail.

Published on Jan. 8 in the journal Neuron, a summary of the research shows wide-ranging variation in patterns of so-called X chromosome inactivation at every level: within tissues, on the left or right sides of a centrally located tissue (like the brain), among different tissue types, between paired organs (like the eyes) and among individuals.

"Calico cats, which are only ever female, have mottled coat colors. They have two different versions of a gene for coat color, which is located on the X chromosome: one version from their mother and the other from their father," explains Jeremy Nathans, M.D., Ph.D., professor of molecular biology and genetics at the Johns Hopkins University and a Howard Hughes Medical Institute investigator. "Their fur is orange or black depending on which X chromosome is silenced in a particular patch of skin cells. X chromosome inactivation actually occurs in all cells in female mammals, including humans, and it affects most of the genes on the X chromosome. Although this phenomenon has been known for over 50 years, it couldn't be clearly visualized in internal organs and tissues until now."

Nathans adds that early in the development of most mammals, when a female embryo has only about 1,000 cells, each cell makes a "decision" to inactivate one of the two X chromosomes, a process that silences most of the genes on that chromosome. The choice of which X chromosome to inactivate appears to be random, but when those cells divide, their descendants maintain that initial decision.

In the new research, the Johns Hopkins team mated female mice carrying two copies of the gene for green fluorescent protein — one on each of the two X chromosomes — with male mice whose single X chromosome carried the gene for a red fluorescent protein. The female offspring from this mating had cells that glowed red or green based on which X chromosome was silenced. Additionally, the team engineered the mice so that not all of their cells were color-coded, since that would make it hard to distinguish one cell from another. Instead, they designed a system that allowed a single cell type in each mouse, such as heart muscle cells, to be color-coded. Their genetic trick resulted in red and green color maps with distinctive patterns for each cell and tissue type that they examined.

Nathans explains that the patterns are determined by the way each tissue develops. Some tissues are created from a very small number of "founder cells" in the early embryo; others are created from a large number. Statistically, the larger the group of founder cells, the greater the chances are of having a nearly equivalent number of red and green cells. Although the ratio in the founding group is roughly preserved as the tissue grows, the distribution of those cells is determined by how much movement occurs during the development of the tissue. For example, in a tissue like blood, where the cells move a lot, the red and green cells are finely intermingled. By contrast, in skin, where the cells show little movement, each patch of skin consists of the descendants of a single cell, which share the same inactive X chromosome — and therefore the same color — creating a coarse patchwork of red and green.

Normally, the pattern of X chromosome inactivation is not easily visualized. This color-coding technique is likely to be valuable for many studies, Nathans says, especially for research on variations caused by changes in the DNA sequence of the X chromosome, referred to as X-linked variation. X-linked genetic variations, such as hemophilia or color blindness, are relatively common, in part because the X chromosome carries many genes — approximately 1,000, or close to 4 percent of the total.

Males who inherit an X-linked disease usually suffer its effects because they have no second X chromosome to compensate for the mutant version of the gene. Female relatives, on the other hand, are more typically “carriers” of X-linked diseases. They have the ability to pass the disease along to their male progeny, but they do not suffer from it themselves due to the normal copy of the gene on their second X chromosome.

In the tissues of certain carrier females, however, the cells that have silenced the X chromosome with a mutated gene cannot compensate for the defect in the cells that have silenced the X chromosome with the normal gene. Nathans and his team saw such a pattern when they examined the retinas of mice that were carriers for mutations in the Norrie disease gene, which is located on the X chromosome. The Norrie disease gene codes for a protein, Norrin, which controls blood vessel formation in the retina. Women who are carriers for Norrie disease can have defects in their retinas, but some women are more affected than others, and sometimes one eye is more affected than the other eye in the same individual.

“X chromosome inactivation is a fascinating aspect of mammalian biology,” says Nathans. “This new technique for visualizing the pattern of X chromosome inactivation should be particularly useful for looking at the role that this process plays in brain development, including the ways that it contributes to differences between the left and right sides of the female brain, and to differences in brain structure between males and females and among different females, including identical twins.”

Link to article in Neuron (live after embargo lifts) 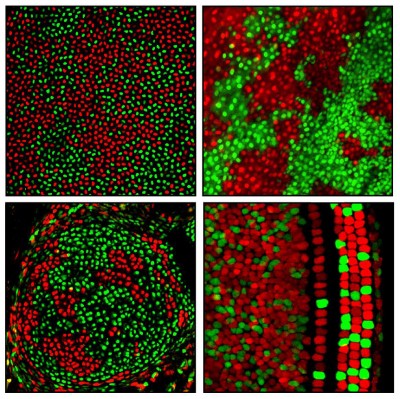 Caption: Patterns of X chromosome silencing in cells of the cornea, skin, cartilage and inner ear of mice. Cells are red or green depending on whether they have inactivated their maternal or paternal X chromosome, respectively. 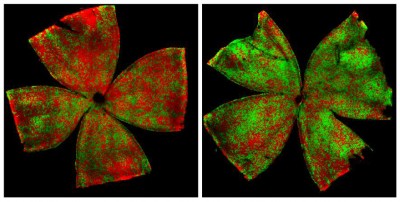 Caption: Differences in X chromosome silencing can greatly affect the same organ on different sides of the body. Shown are the left and right retinas from a single mouse. Cells are red or green depending on whether they have inactivated their maternal or paternal X chromosome, respectively.