Colossal oysters have disappeared from Florida's 'most pristine' coastlines 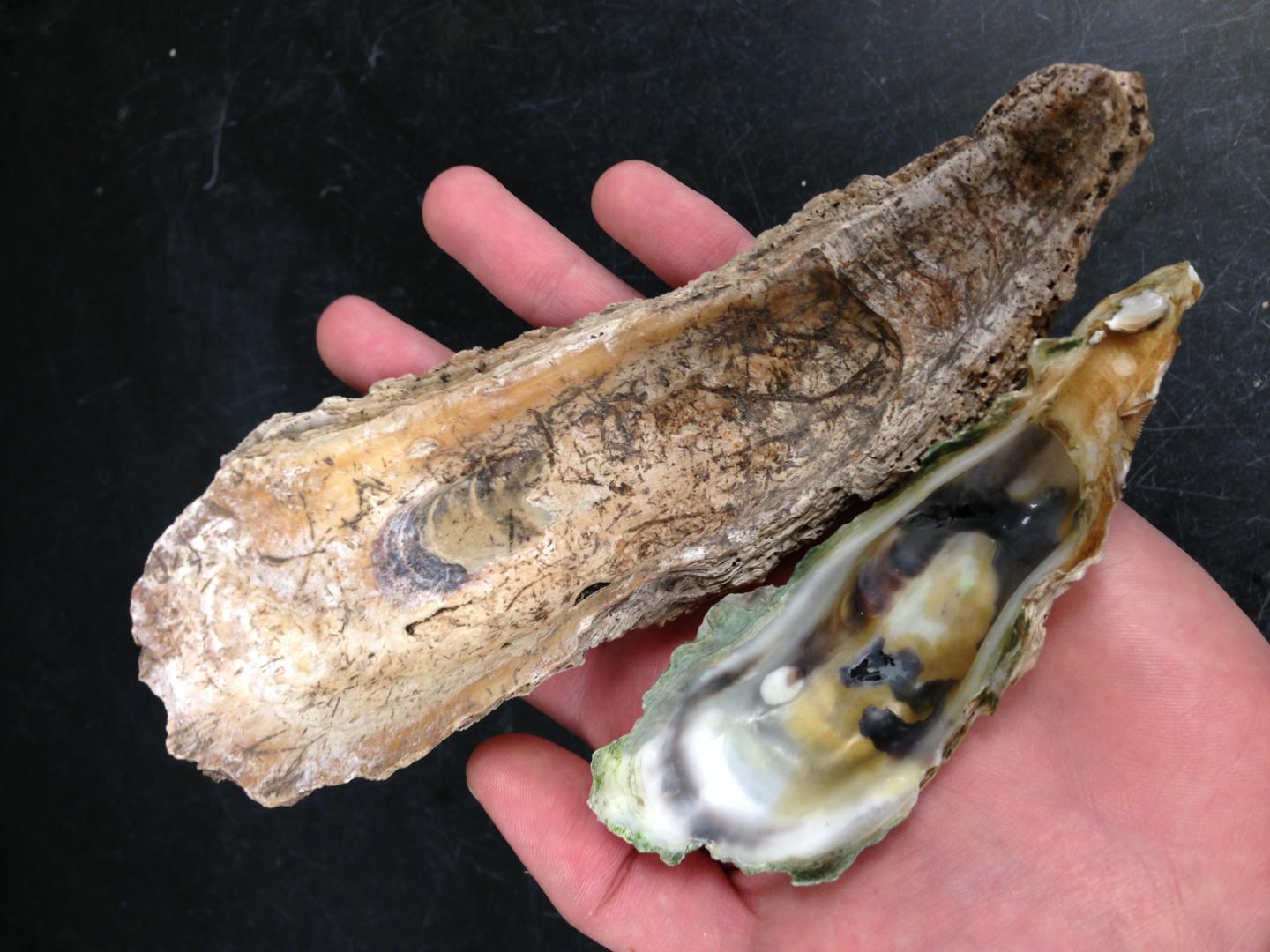 Prehistoric oysters from Crystal River are 55% larger than modern oysters.

TAMPA, Fla. (February 5, 2020)- Hundreds of years ago, colossal oysters were commonplace across much of Florida's northern Gulf Coast. Today, those oysters have disappeared, leaving behind a new generation roughly a third smaller - a massive decline that continues to have both economic and environmental impacts on a region considered by many to be the last remaining unspoiled coastlines in the Gulf.

The loss of these colossal oysters is at the center of new research from an interdisciplinary team of scientists at the University of South Florida. Led by Integrative Biology PhD student Stephen Hesterberg, School of Geosciences faculty member Gregory Herbert, PhD, and Anthropology faculty member Thomas Pluckhahn, PhD, researchers utilized prehistoric oyster shells, excavated from archaeological sites near Crystal River, Florida to measure how much oyster size has changed in the area and learn more about the factors that have led to it. The intent is to better understand the habitats of the distant past to help inform the conservation efforts of today.

"Most policy makers and conservationists working in this area are only considering the last 50 years - when we first began actively monitoring these habitats," said Herbert. "Using archaeological data, our work shows that what these systems looked like 100 or 1,000 years ago matters for conservation efforts now."

The region researchers explored is of significant importance, particularly within the oyster industry. Crystal River is within Florida's 'Big Bend' region and is considered one of the last remaining pristine coastal zones with natural oyster fisheries in the United States. However, because this work illustrates huge changes there that were previously unrecognized, researchers now believe the region may not be as pristine as once thought.

"We've been altering the environment in Florida for a lot longer than the 1950's. So, if we don't look at a longer time scale, we might be missing the root causes of why fisheries and marine environments in our state are beginning to collapse," Hesterberg said.

While the loss of large oysters in these coastal regions may not seem like cause for concern, biologists say the ripples caused by their disappearance have had large-scale repercussions. On the one hand, there's the economic impact to an industry that generates hundreds-of-millions-of-dollars annually and relies upon adult oysters of a minimum size to harvest.

There are also environmental concerns. In nature, large animals of all species are uniquely important in terms of their ecological function. Large oysters, for example, have an exponentially greater role in reproductive output and water filtration compared to smaller oysters. Having more offspring helps oyster reefs recover faster after mass mortality events from storms or natural enemies. Slower rates of water filtration mean that estuary waters downstream from oysters are now increasingly muddy, leading to less sunlight penetration and reduced growth of seagrass, a hugely important habitat for a variety of fish.

Researchers also utilized isotopic geochemistry to study the chemical elements within prehistoric and modern oyster shells. This technique allowed them to gain a better understanding of the biological changes that have led to a roughly 2.6 inch decrease in maximum size.

The team found that the lifespan of modern oysters is shorter by about one year compared to their ancestors and that their current rate-of-growth is slower. In an ideal world, restoring Florida's oyster habitats would mean restoring conditions that lead to longer-lived, faster-growing oysters. If that's not possible, the authors add, the filtration rates of prehistoric oyster reefs might still be restored by increasing oyster numbers or densities.

USF researchers hope these new insights can help change the perspective of the current state of Florida's coastal habitats and, in turn, have significant impacts on the direction of conservation and restoration efforts already underway.