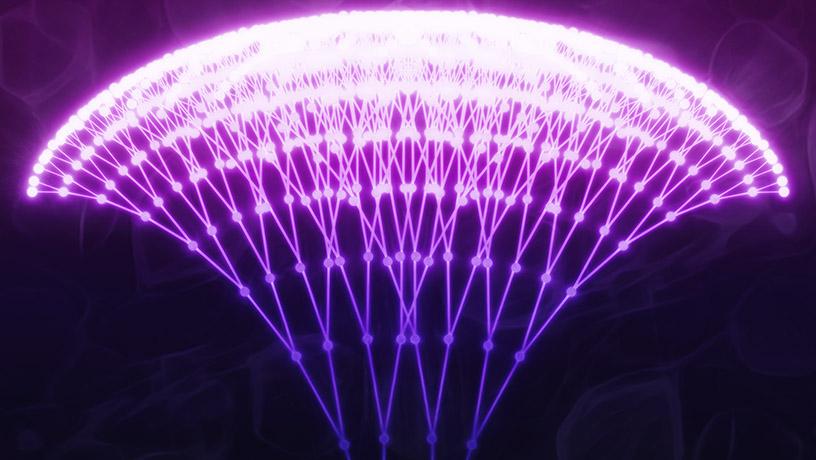 An illustration of the chain-reaction process that underlies the photon avalanching mechanism Columbia Engineering researchers have realized in their nanoparticles. In this process, the absorption of a single low-energy photon sets off a chain reaction of energy transfers and further absorption events that result in many highly excited ions within the nanoparticle, which then release their energy in the intense emission of many higher-energy photons.

Newswise — New York, NY—January 13, 2021—Researchers at Columbia Engineering report today that they have developed the first nanomaterial that demonstrates "photon avalanching,” a process that is unrivaled in its combination of extreme nonlinear optical behavior and efficiency. The realization of photon avalanching in nanoparticle form opens up a host of sought-after applications, from real-time super-resolution optical microscopy, precise temperature and environmental sensing, and infrared light detection, to optical analog-to-digital conversion and quantum sensing.

“Nobody has seen avalanching behavior like this in nanomaterials before,” said James Schuck, associate professor of mechanical engineering, who led the study published today by Nature. “We studied these new nanoparticles at the single-nanoparticle level, allowing us to prove that avalanching behavior can occur in nanomaterials. This exquisite sensitivity could be incredibly transformative. For instance, imagine if we could sense changes in our chemical surroundings, like variations in or the actual presence of molecular species. We might even be able to detect coronavirus and other diseases.”

Avalanching processes—where a cascade of events is triggered by series of small perturbations—are found in a wide range of phenomena beyond snow slides, including the popping of champagne bubbles, nuclear explosions, lasing, neuronal networking, and even financial crises. Avalanching is an extreme example of a nonlinear process, in which a change in input or excitation leads to a disproportionate—often disproportionately large—change in output signal. Large volumes of material are usually required for the efficient generation of nonlinear optical signals, and this had also been the case for photon avalanching, until now.

Of particular note to researchers is that the absorption of just a single photon leads not only to a large number of emitted photons but also to a surprising property: the emitted photons are "upconverted," each one higher in energy (bluer in color) than the single absorbed photon. Scientists can use wavelengths in the infrared region of the optical spectrum to create large amounts of higher-energy photons that are much better at inducing desired chemical changes—such as killing cancer cells—at targeted locations deep within tissue, wherever the avalanching nanoparticles are positioned.

Photon avalanching (PA) behavior drew significant interest more than 40 years ago when researchers recognized that its extreme nonlinearity could broadly impact numerous technologies, from efficient upconverting lasers to photonics, optical sensors, and night vision devices. PA behavior is similar to that of a transistor in electronics, where a small change in an input voltage results in a large change in output current, providing the amplification necessary for the operation of nearly all electronics devices. PA enables certain materials to function essentially as optical transistors.

PA has almost exclusively been studied in lanthanide (Ln) based materials due to their unique optical properties that allow them to store optical energy for relatively long amounts of time. However, achieving PA in Ln systems has been difficult—it requires cooperative interactions between many Ln ions while also moderating loss pathways, and has thus been limited to bulk materials and aggregates, often at low temperatures.

These limitations have relegated the fundamental study and use of PA to a niche role in photonic science, and have led researchers to focus almost exclusively over the past decade on other upconversion mechanisms in materials development, despite the unrivaled advantages offered by PA.

In this new study, Schuck and his international team of collaborators, including the groups of Bruce Cohen and Emory Chan (The Molecular Foundry, Lawrence Berkeley National Lab), Artur Bednarkiewicz (Polish Academy of Sciences), and Yung Doug Suh (Korea Research Institute of Chemical Technology and Sungkyunkwan University), showed that by implementing some key nanoparticle design innovations such as select lanthanide contents and species, they could successfully synthesize novel 20nm nanocrystals that demonstrate photon avalanching and its extreme nonlinearity.

The team observed that the nonlinear optical response in these avalanching nanoparticles scales as the 26th power of the incident light intensity—a 10% change in incident light causes more than a 1000% change in emitted light. This nonlinearity far exceeds responses reported previously in lanthanide nanocrystals. This extraordinary response means the avalanching nanoparticles (ANPs) show great promise as sensors, since a small change in the local environment can lead to the particles emitting 100-10,000 times more brightly. The researchers also found that this giant nonlinear response in ANPs enables deeply sub-wavelength optical imaging (with the ANPs used as luminescent probes, or contrast agents), using only simple scanning confocal microscopy.

“The ANPs allow us to beat the resolution diffraction limit for optical microscopy by a significant margin, and they do it essentially for free, due to their steeply nonlinear behavior,” Schuck explains.

The study’s lead author Changhwan Lee, who is a PhD student in Schuck’s group, adds, “The extreme nonlinearity in a single ANP transforms a conventional confocal microscope into the newest superresolution imaging system.”

Schuck and his team are now working on how to use this unprecedented nonlinear behavior for sensing changes in the environment, such as fluctuations in temperature, pressure, humidity, with a sensitivity that has not yet been achievable.

“We are very excited about our findings,” says Schuck. “We expect them to lead to all kinds of revolutionary new applications in sensing, imaging, and light detection. They may also prove critical in future optical information processing chips, with ANPs providing the amplifier-like response and small spatial footprint typical of a single transistor in an electronics circuit.”

The study was supported by the Global Research Laboratory Program through the National Research Foundation of Korea funded by the Ministry of Science and ICT (no. 2016911815). Support was also provided by Programmable Quantum Materials, an Energy Frontier Research Center at Columbia University funded by the U.S. Department of Energy (DOE), Office of Science, Basic Energy Sciences (BES), under award DE-SC0019443. Work at the Molecular Foundry was supported by the Office of Science, Office of Basic Energy Sciences, of the U.S. Department of Energy under Contract No. DE-AC02-05CH11231.