Researchers use atomically thin materials -- 1/100,000 the size of a human hair -- to manipulate the phase of light without changing its amplitude, at extremely low power loss

26-Feb-2020 10:40 AM EST, by Columbia University School of Engineering and Applied Science
favorite_border

Illustration of an integrated micro-ring resonator based low loss optical cavity with semiconductor 2D material on top of the waveguide. 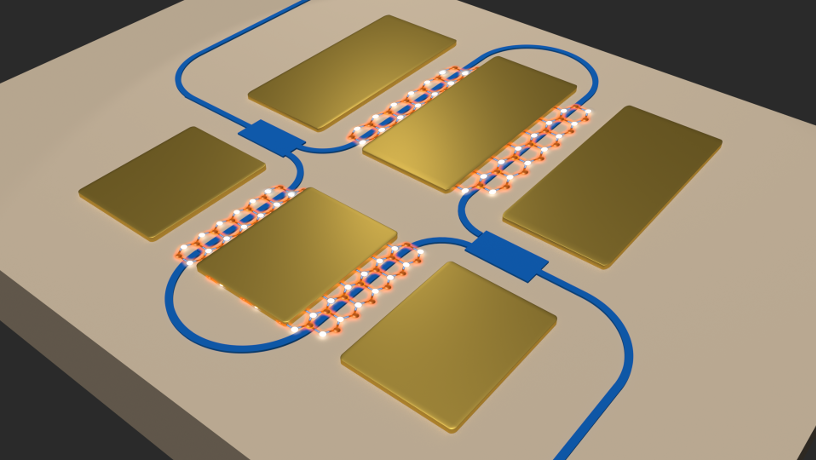 Researchers use atomically thin materials—1/100000 the size of a human hair—to manipulate the phase of light without changing its amplitude, at extremely low power loss; could enable applications such as LIDAR, phased arrays, optical switching, and quantum and optical neural networks

Newswise — New York, NY—February 24, 2020—Optical manipulation on the nano-scale, or nanophotonics, has become a critical research area, as researchers seek ways to meet the ever-increasing demand for information processing and communications. The ability to control and manipulate light on the nanometer scale will lead to numerous applications including data communication, imaging, ranging, sensing, spectroscopy, and quantum and neural circuits (think LIDAR—light detection and ranging—for self-driving cars and faster video-on-demand, for example).

Today, silicon has become the preferred integrated photonics platform due to its transparency at telecommunication wavelengths, ability for electro-optic and thermo-optic modulation, and its compatibility with existing semiconductor fabrication techniques. But, while silicon nanophotonics has made great strides in the fields of optical data communications, phased arrays, LIDAR, and quantum and neural circuits, there are two major concerns for large-scale integration of photonics into these systems: their ever-expanding need for scaling optical bandwidth and their high electrical power consumption.

Existing bulk silicon phase modulators can change the phase of an optical signal, but this process comes at the expense of either high optical loss (electro-optic modulation) or high electrical power consumption (thermo-optic modulation). A Columbia University team, led by Michal Lipson, Eugene Higgins Professor of Electrical Engineering and professor of applied physics at Columbia Engineering, announced that they have discovered a new way to control the phase of light using 2D materials—atomically thin materials, ∼ 0.8 nanometer, or 1/100000 the size of a human hair—without changing its amplitude, at extremely low electrical power dissipation.

In this new study, published today by Nature Photonics, the researchers demonstrated that by simply placing the thin material on top of passive silicon waveguides, they could change the phase of light as strongly as existing silicon phase modulators, but with much lower optical loss and power consumption.

“Phase modulation in optical coherent communication has remained a challenge to scale, due to the high optical loss that was associated with phase change,” says Lipson. “Now we’ve found a material that can change the phase only, providing us another avenue to expand the bandwidth of optical technologies.”

The optical properties of semiconductor 2D materials such as transition metal dichalcogenides (TMDs) are known to change dramatically with free-carrier injection (doping) near their excitonic resonances (absorption peaks). However, very little is known about the effect of doping on the optical properties of TMDs at telecom wavelengths, far away from these excitonic resonances, where the material is transparent and therefore can be leveraged in photonic circuits.

The Columbia team, which included James Hone, Wang Fong-Jen Professor of Mechanical Engineering at Columbia Engineering, and Dimitri Basov, professor of physics at the University, probed the electro-optic response of the TMD by integrating the semiconductor monolayer on top of a low-loss silicon nitride optical cavity and doping the monolayer using an ionic liquid. They observed a large phase change with doping, while the optical loss changed minimally in the transmission response of the ring cavity. They showed that the doping-induced phase change relative to change in absorption for monolayer TMDs is approximately 125, which is significantly higher than that observed in materials commonly employed for silicon photonic modulators including Si and III-V on Si, while being simultaneously accompanied by negligible insertion loss.

“We are the first to observe strong electro-refractive change in these thin monolayers,” says the paper’s lead author Ipshita Datta, a PhD student with Lipson. “We showed pure optical phase modulation by utilizing a low loss silicon nitride (SiN)-TMD composite waveguide platform in which the optical mode of the waveguide interacts with the monolayer. So now,

by simply placing these monolayers on silicon waveguides, we can change the phase by the same order of magnitude, but at 10000 times lower electrical power dissipation. This is extremely encouraging for the scaling of photonic circuits and for low-power LIDAR.”

The researchers are continuing to probe and better understand the underlying physical mechanism for the strong electrorefractive effect. They are currently leveraging their low-loss and low-power phase modulators to replace traditional phase shifters, and therefore reduce the electrical power consumption in large-scale applications such as optical phased arrays, and neural and quantum circuits.

The study is titled “Low-loss composite photonic platform based on 2D semiconductor monolayers.”

Competing interests: M.L., J.H., I.D., S.C., G.R.B. and D.N.B are named inventors on US provisional patent application 16/282,013 regarding the technology reported in this article.

Columbia Engineering, based in New York City, is one of the top engineering schools in the U.S. and one of the oldest in the nation. Also known as The Fu Foundation School of Engineering and Applied Science, the School expands knowledge and advances technology through the pioneering research of its more than 220 faculty, while educating undergraduate and graduate students in a collaborative environment to become leaders informed by a firm foundation in engineering. The School’s faculty are at the center of the University’s cross-disciplinary research, contributing to the Data Science Institute, Earth Institute, Zuckerman Mind Brain Behavior Institute, Precision Medicine Initiative, and the Columbia Nano Initiative. Guided by its strategic vision, “Columbia Engineering for Humanity,” the School aims to translate ideas into innovations that foster a sustainable, healthy, secure, connected, and creative humanity.

Caption: Illustration of an integrated micro-ring resonator based low loss optical cavity with semiconductor 2D material on top of the waveguide.