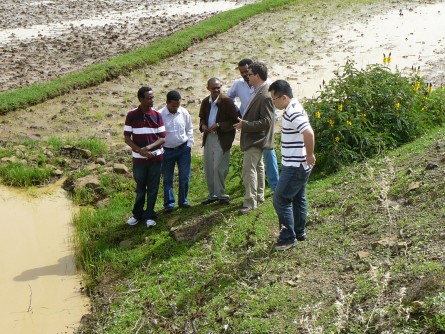 Senior scientist Michael Wimberly of the Geographic Information Science Center of Excellence, second from right, inspects mosquito breeding sites in the Amhara region of Ethiopia with researchers from SDSU and public health collaborators from the Health, Development and Anti-Malaria Association. 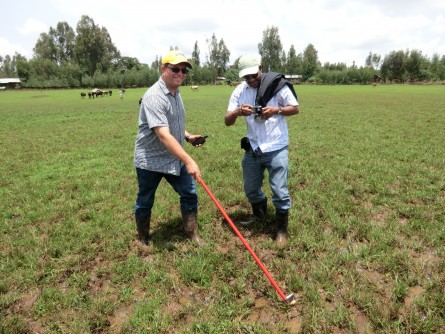 Sampling mosquito larvae in a seasonally flooded pasture in the Amhara region of Ethiopia will give senior scientist Michael Wimberly, of the Geographic Information Science Center of Excellence, left, and research scientist Gabriel Senay, of the U.S. Geological Survey Earth Resources Observation and Science Center, some of the data they need to help predict outbreaks of malaria.

Newswise — Dealing with malaria is a fact of life for more than 91 million Ethiopians. Each year four to five million contract malaria, one of the biggest health problems in this poor country. “I was sick twice a year,” recalled Woubet Alemu, a South Dakota State University doctoral student and a native of Ethiopia. The mosquito-transmitted illness causes headache, chills and vomiting. Alemu’s stepmother got malaria after childbirth. By the time the family took her to the hospital 18 miles away, it was too late. She died within a week.

The incidence of malaria was high when he was a child, then it drastically decreased, but within the last few years, it has become more prevalent, Alemu explained.

Despite improvements in the health care system, transportation and poverty make combating the seasonal disease challenging, according to Michael Wimberly, senior scientist at the Geographic Information Science Center of Excellence. Through a five-year, $1.7 million grant from the National Institutes of Health, he and a team of South Dakota scientists will combine environmental data gathered through earth-imaging satellites and surveillance data from public health professionals in the Amhara region of Ethiopia to anticipate malaria outbreaks.

Dealing with high risk, limited resourcesThe Amhara region has more than 17 million people, 90 percent living in rural areas with most of those engaged in subsistence-level farming. Alemu, whose family has farmed in the Amhara region for generations, said the small grains they grow are used to feed the family. “We don’t have enough cash crops.” Consequently, they are unable to pay for medicine.

“This region has one of highest malaria burdens in the country,” said Wimberly, who has worked on early warning systems for West Nile Virus and malaria. Other team members are senior scientist Geoffrey Henebry, SDSU computer scientist Yi Liu and Gabriel Senay, a research physical scientist at U.S. Geological Survey Earth Resources Observation and Science Center, commonly known as EROS. Senay is also a native of Ethiopia.

Considering source of infectionOnly one genus of mosquito, Anopheles, carries the malarial parasite Plasmodium, Wimberly explained. He and his team examine factors, such as temperature and rainfall, which influence the mosquito population. Peak times for malaria transmission coincide with the planting season--April through June, and harvest—September through December, according to Alemu. “It’s a rural disease,” said Wimberly.

Ethiopia has a monsoon climate so mosquitoes “are knocked down in the dry season and then have to build up their populations again” when the rains come, Wimberly noted. His team has found that what happens in the beginning of the rainy season provides some long-term indicators of transmission potential in terms of mosquitoes. However, he cautioned, “climate is not the only driver, so we can’t always get very precise predictions.” If the malaria parasite is not present, high mosquito numbers alone will not result in an epidemic, but it’s something that must be monitored. When infected workers travel from the lowland area to the highlands, he noted, “that can be the ignition to start the fire.”

Tracking malaria casesThis project will use a unique, two-pronged approach, according to Wimberly. Predictive software tools will be used to combine massive online archives of environmental data from earth-imaging satellites with disease statistics from Ethiopian public health officials through collaboration with the Amhara Regional Health Bureau, the Federal Ministry of Health and the Health, Development and Anti-Malaria Association, a local nongovernmental organization. The Anti-Malaria Association seeks to provide free medicine to villagers, according to Alemu, who once volunteered with the aid organization. “By tracking malaria cases as they occur, we can look for anomalies or spikes in the case data, indicators of a bigger epidemic or peak,” Wimberly pointed out. However, disease data alone doesn’t provide much lead time for preventive measures.

Researchers have always shared their information with emergency management people, but Wimberly said, “our idea is to combine environmental and disease data in an integrated system. We bring [public health professionals] to the table up front and they teach us what they need.” With this approach, the researchers hope to “come up with something more practical and usable than we’ve seen in the past.” The collaboration will help emergency managers decide what they’ll do if they have a six-, three- or even one-month lead time.

“That’s ultimately part of the research, taking the models and linking them to decision support,” Wimberly noted. Then public health agencies can mobilize the resources to combat malaria where and when it’s most likely to occur and, ultimately, save lives.

About the Geographic Information Science Center of Excellence The Geographic Information Science Center of Excellence (GISCE) is a joint collaboration between South Dakota State University (SDSU) and the United States Geological Survey's National Center for Earth Resources Observation and Sciences (EROS). The purpose of the GSCE is to enable South Dakota State University faculty and students, and EROS scientists to carry out collaborative research, seek professional development, and implement educational programs in the applications of geographic information science. 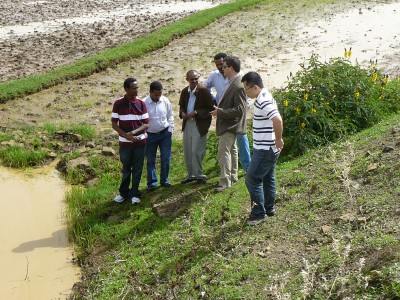 Caption: Senior scientist Michael Wimberly of the Geographic Information Science Center of Excellence, second from right, inspects mosquito breeding sites in the Amhara region of Ethiopia with researchers from SDSU and public health collaborators from the Health, Development and Anti-Malaria Association. 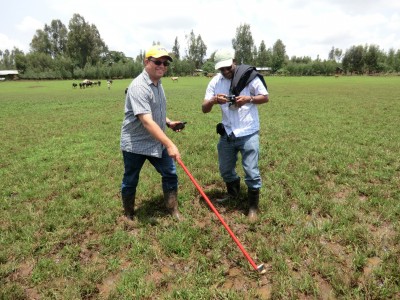 Caption: Sampling mosquito larvae in a seasonally flooded pasture in the Amhara region of Ethiopia will give senior scientist Michael Wimberly, of the Geographic Information Science Center of Excellence, left, and research scientist Gabriel Senay, of the U.S. Geological Survey Earth Resources Observation and Science Center, some of the data they need to help predict outbreaks of malaria.