Commencement 2014: Class Reflections – That Was Then, This Is Now

Highlights Regarding Members of the Rensselaer Polytechnic Institute Class of 2014 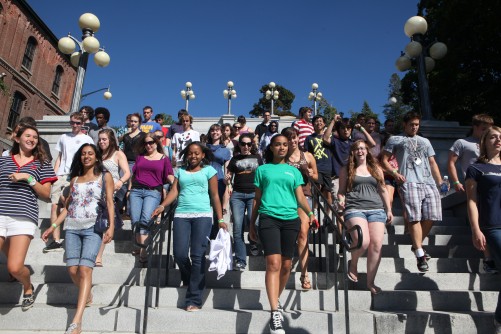 Pictured here, an image from August 2010, of members of the Class of 2014, when they made their debut on the Rensselaer campus.

Newswise — Troy, N.Y. – During the annual Student Orientation program, Karen Long, director of undergraduate admissions at Rensselaer Polytechnic Institute, often delivers remarks noting highlights regarding the incoming class. In 2010, the incoming Class of 2014 made its debut on the Rensselaer campus. The class was comprised of nearly 1,170 students. The high-achieving group included 327 women and a significant increase in the national and international profile of the student body.

At the time, nearly 27 percent of the students came from areas outside of the Northeast. The first-year students hailed from 42 states, in addition to the District of Columbia, Puerto Rico, and 14 foreign countries, reinforcing the well-known reputation of Rensselaer as a top-tier university with global reach and global impact.

Following is what Long had to say about the Class of 2014:

For the men, more of you are named Michael than any other name. Michael has been the most common name for the last nine years, but it was edged out by Matthew (by one student). And for the women, the most popular name is Emily.

Within the class, 84 students were valedictorians or salutatorians in high school, and many were actively involved in music, research, and the arts. Members of the class come to Rensselaer having demonstrated extracurricular achievement, leadership, and support for civic engagement in various roles including sports captains and class presidents, Eagle Scouts, and Girl Scout Gold Award winners, among others.

Continuing a Rensselaer legacy, 89 students are the sons or daughters, grandsons or granddaughters of Rensselaer graduates, which serves as a wonderful message about the Rensselaer education and the impact it has on alumni long after they’ve graduated from Rensselaer, and the longstanding connection Rensselaer makes with graduates to educate men and women who are the leaders of tomorrow.

A New Beginning On Saturday, May 24, members of the Class of 2014 will cross the Rensselaer stage as they participate in the 208th Commencement Ceremony, and begin a new chapter in their lives.

While at Rensselaer, members of the class have “achieved some incredible feats,” according to Louis Trzepacz, associate dean of student retention and success at Rensselaer.

Within the class, two students received NASA Aeronautics Scholarships; several students were part of a quarter-finalist team at the World Robotics Championship in St. Louis, Mo.; a number of students have presented their research all over the country and the world. Upon graduation, future plans for members of the Class of 2014 include pursuing graduate programs at Rensselaer and colleges/universities around the country; carving out time to launch a business; and one graduate plans to head to Houston, Texas to join Teach for America.

“The Class Deans at Rensselaer work to connect student aspirations to an academic and personal roadmap that brings those aspirations within reach,” Trzepacz said. “Members of the Class of 2014 have achieved more than even they believed possible and are prepared to navigate the complexity of tomorrow’s challenges. It has been truly humbling and inspiring to have worked with them.”