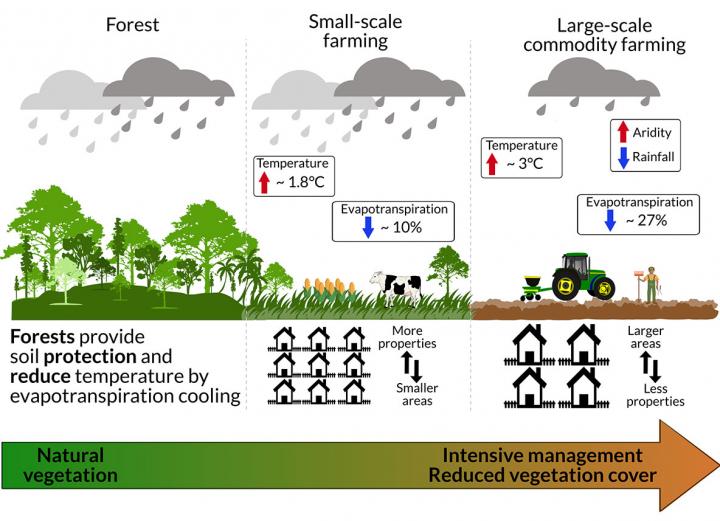 Deforestation and commodity farming activities leading to a warmer and drier local climate. 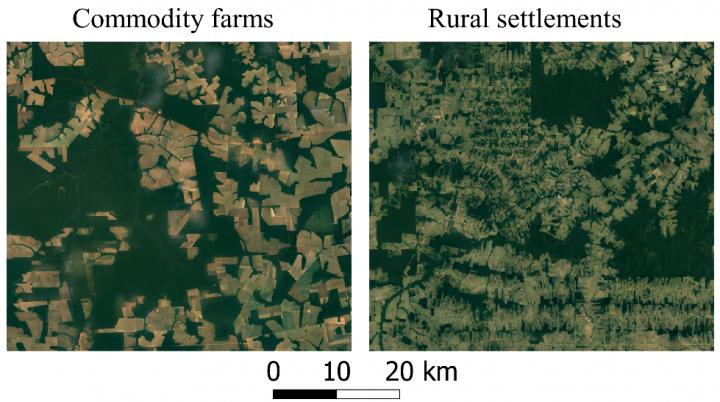 Difference between commodity farms and rural settlements in deforested areas used for farming in southern Amazon showed in satellite images.

Deforestation has converted swaths of land in the southern Amazon region from rainforest to farmland. The uses of the deforested land are diverse, and activities can range from small-scale farming in rural settlements to large-scale commodity agriculture. Commercial farms in the Southern Amazon can reach hundreds of thousands of hectares in area, exporting millions of tons in grains and beef every year.

Eduardo Maeda from the University of Helsinki and colleagues used satellite data to compare areas dominated by different land uses and farm sizes to evaluate their impacts on the regional climate. Although small rural settlements experienced no clear changes in rainfall during recent decades, areas dominated by commodity farms have become significantly drier. Areas of commodity farming also experienced a much higher increase in temperature, in comparison with small-scale rural settlements, largely due to intense management of commercial crops leading to reduced vegetation cover throughout the year and decreased plant transpiration. According to the authors, mitigating climate change in the Amazon basin will require alternatives to current commodity farming practices.

The research by Maeda and colleagues demonstrate that this process is further aggravated by large commodity farms. The production of commodity crops in the Amazon forest is often associated with a very intensive management of the land. Because of the favorable climatic conditions, farmers often have two harvesting/seeding seasons per year. These activities completely remove vegetation from the land surface, leading to a warmer and drier local climate.

Although areas dominated by small rural settlements also experience temperature increase, the magnitude of the changes are substantially smaller than those observed in big commodity farms. The authors of the study argue that the main reason is because these small rural settlements are often less managed, leaving a denser and more continuous vegetation cover than in the large monoculture farms.

The results of this research provide compelling evidence that alternative agricultural practices will be critical for a sustainable future in the Amazon rainforest.

"This means that stopping deforestation is no longer enough. To protect the remaining forests, farmers in the Amazon region will have to incorporate more sustainable practices".

According to the research, this means that agricultural activities need to be better integrated with the natural Amazon ecosystem.

Agroforestry is for example an interesting alternative, as it seeks to manage forest services and agriculture at the same time, improving soil fertility, increasing water availability, while preserving vegetation cover and microclimate. Reforestation of abandoned pastures and areas of illegal deforestation are also important pathways to mitigate environmental changes.

The authors of the study warn that such changes will not come easily. The production of commodity crops in the Southern Amazon can be a very profitable business. Hence, local and international policies, in combination with actions led by the food industry and civil society organizations, will play a critical role in changing the current mentality. Finally, increasing international awareness and consumers' preference for more sustainable products, will be essential to create real pressure in the supply-chain, hopefully giving some hope for the future of the Amazon rainforest.