Common Cold Can Be Surprisingly Dangerous for Transplant Patients 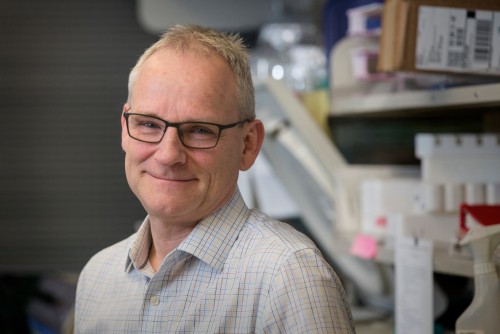 Newswise — The common cold is a major source of annoyance for most of us, but new research has found that the most prevalent respiratory infection can be far worse than a stuffy nose for one sector of the population — bone marrow transplant patients.

These vulnerable patients, whose immune defenses have taken a dramatic double hit from both their original disease and the treatments required to repopulate their immune system with donor cells, are especially susceptible to a wide range of infections that typically don’t cause major problems in healthy people. But rhinovirus, the most common respiratory virus, has traditionally been overlooked in this population, said Fred Hutchinson Cancer Research Center infectious disease specialist Dr. Michael Boeckh.

“This is such a prevalent virus … about 25 percent of stem cell transplant patients get infected [with rhinovirus] during the first year,” said Boeckh, who heads Fred Hutch’s Infectious Disease Sciences Program. “The virus was always considered kind of a common cold, a mild virus. People shrugged their shoulders, what should we do about it, it comes and goes.”

Now, a new study led by infectious disease researcher Dr. Sachiko Seo, formerly of Fred Hutch and now a physician at the National Cancer Research Center East in Chiba, Japan, and Boeckh and published last month in the journal Haematologica has found that like more “serious” viruses, rhinovirus can cause pneumonia — and when it does, it can be deadly to those recovering from transplantation.

The results not only point to the importance of strong infection prevention measures for transplant patients and better care for those with rhinovirus-related pneumonia but lend a rationale for drug companies and researchers to prioritize developing effective antiviral drugs for this most common of common cold-causing viruses, Boeckh said.

“Just to treat people like you and me who are irritated by the sniffles, that’s not good enough for the market,” he said. “For a company or anybody to step forward and say, ‘I’m going to make this a priority,’ you have to show that there’s a real disease.”

This virus ‘can’t be disregarded’

Their study was not the first to show that transplant patients get rhinovirus but the first to definitively link the virus to pneumonia in these patients. That new discovery is thanks to modern virus detection methods — rhinovirus was difficult to pinpoint using older technologies, Boeckh said. Over the past decade, with the advent of better viral detection, he and other clinicians started to see evidence of rhinovirus in the lungs in transplant patients with pneumonia. But they didn’t know if the virus was causing the complication or if it was just along for the ride.

In their recent study, the researchers took a retrospective look at 697 patients who’d received transplants at Seattle Cancer Care Alliance, Fred Hutch’s clinical care partner, between 1993 and 2015 and who had also tested positive for rhinovirus. They compared the 128 patients with rhinovirus in the lower respiratory tract to those infected with viruses already known to cause pneumonia — and sometimes death — in transplant patients, namely, influenza; parainfluenza virus, or PIV; and respiratory syncytial virus, or RSV.

In contrast to what researchers believed in the past, their study showed that rhinovirus is linked to pneumonia and death even without any other co-existing infections, strongly suggesting that the so-called mild virus can be dangerous all on its own.

Boeckh and his colleagues found that rhinovirus infection led to pneumonia less often than the other viruses. About 15 percent of patients with an upper respiratory tract infection — the type of infection we typically think of as a “common cold” — went on to develop pneumonia, or an infection of the lower respiratory tract. Progression from cold-like symptoms to pneumonia for patients infected with RSV, for example, happened about twice as often.

Even though rhinovirus is less likely on a case-by-case basis to lead to pneumonia, it’s actually the most common cause of pneumonia caused by respiratory viruses in transplant patients, Boeckh said. That’s because the virus is so common and because it’s present year-round, unlike the other, more seasonal viruses.

Overall, their results point to the need for better preventions and treatments for the virus, Boeckh said.

“This is an important pathogen,” he said. “It can’t be disregarded as a common cold virus.”

How to prevent complications — now and in the future

In fact, the scientists believe the pathogen is so important they’ve started an entire research program around it. Dr. Alpana Waghmare, one of the study authors who is a pediatric infectious disease specialist at Seattle Children’s and a Fred Hutch affiliate researcher, is launching a research project to better understand how and why rhinovirus is so dangerous to transplant patients.

For now, she’s concentrating on understanding which patients are most likely to develop pneumonia from the virus. In a different study Waghmare presented at the recent annual meeting of the American Society for Blood and Marrow Transplantation in Orlando, Florida, the researchers teased out a few risk factors that can drive the development of lower respiratory tract infections — namely, high levels of steroid use (commonly given to transplant patients for other complications such as graft-vs.-host disease) and a low white blood cell count.

Her team’s next step will be to understand whether certain patients are at higher risk for getting infected with rhinovirus in the first place and to ask if there are other risk factors for pneumonia and other poor outcomes from the infection.

Even though there’s no effective drug for rhinovirus on the market yet, understanding who is at highest risk of complications from the virus is still important, Waghmare said. The research field needs to provide evidence of how rhinovirus is harmful to spur such a drug’s development as well as to understand which patients would benefit most once such a treatment is available so clinicians can know who should be monitored or treated more aggressively, she said.

“So many of our patients get rhinovirus, but most of the infections are mild and we want to know who would likely benefit from any potential therapies,” Waghmare said. “You need to know how to stratify people to get the most bang for your buck in terms of whom you treat.”

For now though, in the absence of an effective drug, there are a few steps transplant patients and their caregivers can take, Waghmare said.

Patients who are within the first year of receiving a transplant should always check with their doctor as soon as they develop any cold-like symptoms. “Don’t wait things out,” she said.

As a general infection control practice, any family members and friends with cold or flu symptoms should limit contact with post-transplant patients as much as possible. Waghmare acknowledges that’s difficult in practice though, as for instance when the patient’s caregiver comes down with a cold.

For cancer care facilities, it’s important to keep employees with any cold symptoms out of the clinic, Boeckh said. He points out that the SCCA has a very aggressive infection control program and they all make infection prevention in this vulnerable population a top priority.

For more information on dealing with common infections after cancer, read these tips from infection control expert Dr. Steven Pergam.

Story by Rachel Tompa. Tompa, a staff writer at Fred Hutchinson Cancer Research Center, joined Fred Hutch in 2009 as an editor working with infectious disease researchers and has since written about topics ranging from nanotechnology to global health. She has a Ph.D. in molecular biology from the University of California, San Francisco and a certificate in science writing from the University of California, Santa Cruz. Reach her at [email protected] or follow her on Twitter @Rachel_Tompa.Are you interested in reprinting or republishing this story? Be our guest! We want to help connect people with the information they need. We just ask that you link back to the original article, preserve the author’s byline and refrain from making edits that alter the original context. Questions? Email senior writer/editor Linda Dahlstrom at [email protected].