For children with severe obesity who cannot reduce their weight in other ways, age should not be a sole factor in whether to offer surgical treatment 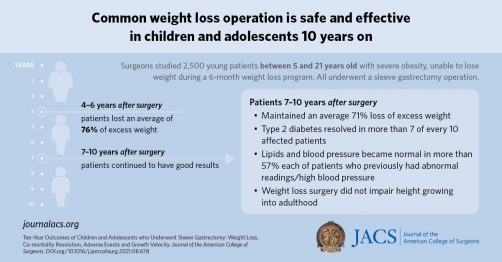 Newswise — CHICAGO: Results from a 10-year study of children and adolescents who underwent a common weight loss operation to treat severe obesity show they safely have long-lasting major weight loss and improvement of their obesity-related medical problems without stunting their growth in height. The study, involving the longest known follow-up of pediatric patients after laparoscopic sleeve gastrectomy, is published online by the Journal of the American College of Surgeons ahead of print.

Insufficient information existed on results of this weight loss operation in children and adolescents beyond five years, according to study authors from Saudi Arabia, where the research took place. Also called the gastric sleeve procedure, sleeve gastrectomy is now more popular than gastric bypass because of lower complication rates.1,2

During this operation, surgeons divide and remove part of the stomach, leaving the remaining stapled portions to create a “sleeve” in the form of a banana-sized stomach. This smaller tubelike new stomach enables patients to eat less food and lose weight. It’s also effective because surgeons remove the part of the stomach containing the “hunger” hormone that stimulates appetite.

Their long-term study results showed that patients lost nearly 30 percent of their total weight, on average, and had widespread reversal of type 2 diabetes and key heart disease risk factors, with no procedure-related deaths or major complications, Dr. Alqahtani reported.

“Our findings present clear evidence that should remove hesitance to perform bariatric surgical treatment in children and young adolescents who could benefit from the operation,” he said. “We have a proven solution for severe obesity and its comorbidities [related diseases].”

This study is the largest of its kind to date in this age group, with more than 2,500 participants aged 5 to 21 years, reported Dr. Alqahtani.3 Nearly one-third were under age 15 at the time of their operation, which he said is younger than in many U.S. studies.

All patients had severe obesity, which is at least 120 percent of the 95th percentile for age and sex on the Centers for Disease Control and Prevention’s growth charts.4 The patients reportedly had been unable to lose substantial weight despite a six-month weight loss program involving dietary and behavioral counseling.

Between 2008 and 2021, the patients underwent sleeve gastrectomy. Before the operation, approximately one in 10 patients had type 2 diabetes or abnormal lipids (blood fats). High blood pressure was even more prevalent at 15 percent of these young patients. Obesity, which affects 18.5 percent of U.S. youth,4 raises the risk of these serious medical conditions as well as fatty liver disease, sleep apnea, and depression, among others.5

The pediatric patients continued to have good results seven to 10 years after the operation:

Because many of their patients had not yet reached their full adult height, the researchers could compare growth velocity—the speed of growth in height—between younger and older pediatric patients. They found growth velocity was unaffected and did not differ between patients 14 or younger versus older than 14.

Their findings correspond with current scientific evidence recommending early surgical intervention, Dr. Alqahtani said. The most recent guidelines from the American Academy of Pediatrics2 and the American Society for Metabolic and Bariatric Surgery6 do not advise waiting until a child reaches maturity if the operation is recommended for the child based on their weight and obesity-related diseases.

“If you surgically intervene early, you can cure children’s obesity-related diseases early and improve their quality of life, and if you wait longer, their diseases might become irreversible,” Dr. Alqahtani said.

Dr. Al-Qahtani attributed their good results to factors including the following:

Another strength of the study, Dr. Alqahtani said, is their patient population had a more even sex-based distribution than previous studies. Girls are likelier than boys to have a weight loss operation,2 but male patients comprised 45 percent of their sample.

The authors report no relevant disclosures.

3 Pediatric patient was defined as up to age 21 according to: Hardin AP, Hackell JM, American Academy of Pediatrics Committee on Practice and Ambulatory Medicine. Age limit of pediatrics. Policy statement. Pediatrics.   2017;140(3):e20172151.

About the American College of SurgeonsThe American College of Surgeons is a scientific and educational organization of surgeons that was founded in 1913 to raise the standards of surgical practice and improve the quality of care for surgical patients. The College is dedicated to the ethical and competent practice of surgery. Its achievements have significantly influenced the course of scientific surgery in America and have established it as an important advocate for all surgical patients. The College has more than 84,000 members and is the largest organization of surgeons in the world. For more information, visit www.facs.org [.]