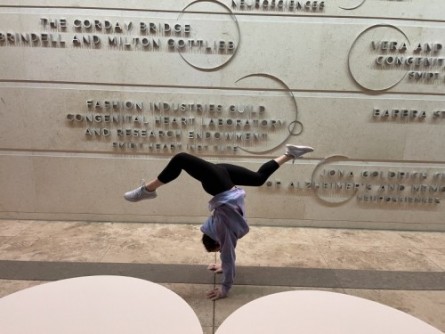 Molly Neinstein performs a handstand on her way to her surgery.

Newswise — Then, a few years ago, the high school junior from Calabasas, California, began experiencing pain in her hamstrings and lower back. After visiting numerous doctors and exhausting all treatment options—from physical therapy to acupuncture—her condition only grew worse and she started losing flexibility that is critical to gymnastics.

The pain was so severe that it interfered with Neinstein's most basic activities, such as attending school or sitting in a chair for a long period of time.

"I lost my power," said Neinstein, 15. "While my teammates were getting better, I felt like I was getting worse."

From Powerless to Powerful

In January 2020, unable to endure the pain or the disappointment of seeing her skills deteriorate, Neinstein visited David L. Skaggs, MD, MMM, co-director of the Cedars-Sinai Spine Center, director of the Pediatric Orthopaedics Program and executive vice chair of the Department of Orthopaedics.

Skaggs diagnosed Neinstein with spondylolisthesis, a displacement of a vertebra in the spine in which the bone slides out of its proper position onto the bone below. The condition affects 1 in 20 people in the U.S.

Skaggs says that the majority of spondylolisthesis cases in children do not need surgery. Neinstein's case, however, was one of the more severe he had seen.

"Molly's L5 vertebra had slipped, causing her bone to rub against another bone, resulting in the unrelenting back pain," he said.

Neinstein had two options: give up gymnastics or have spinal fusion surgery that could return her to gymnastics but carried a risk of paralysis.

For Neinstein, the answer was clear. She underwent surgery in May.

"I'm really trying to think of the positive," Neinstein said. "Because I know if I think about the negative, it’s just not going be as good of a comeback as it could have been."

Skaggs, a former NCAA All-American college athlete knew that, as an elite athlete, Neinstein was not going to give up on her dream.

"Most really great athletes and most elite athletes don't want to stop competing because they have this unbelievable work ethic and play through pain," Skaggs said.

The goal for Skaggs was to get Neinstein back to a painless life and doing what she loves in time for college recruitment season in the fall of 2022.

Skaggs performed a spinal fusion, leaving the two vertebrae that were rubbing together and inserted screws across those vertebrae to hold them in place.

"Molly is a Level 10 gymnast. That means that she's not only fearless, but she's also incredibly talented, strong, balanced and dedicated," Skaggs said. "She is on her way to becoming an NCAA Division 1 scholarship gymnast. She can do things that terrify me."

Her mother, Barbra Neinstein, said she admires her daughter's dedication.

"She decided at a pretty young age that she wanted to compete at a Division 1 college and that has been her goal," she said. "That's her dream. And that's what she's been working toward."

Today, two months after surgery, Neinstein is easing herself back onto the mats and continuing her journey to make it onto a Division 1 gymnastics team.

"If you stay positive, your recovery will be better, because you're going to keep working towards what you want," Neinstein said. "The love I have for the sport just makes me want to keep going."