Compost key to sequestering carbon in the soil 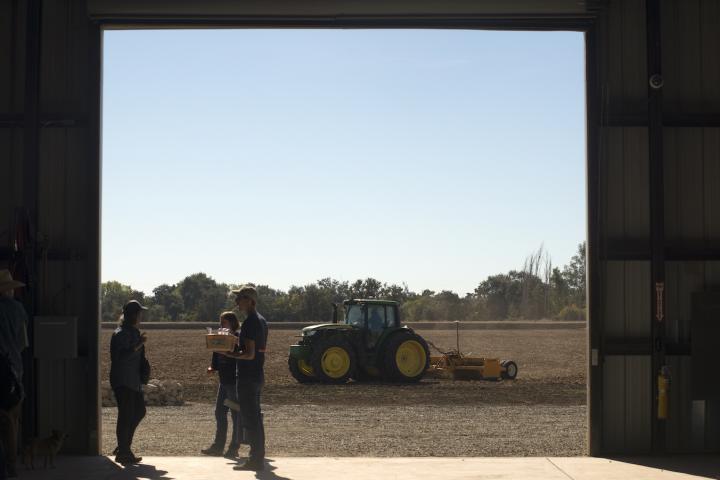 Researchers talk while a tractor moves across a field at the UC Davis Russell Ranch Sustainable Agriculture Facility in 2016. 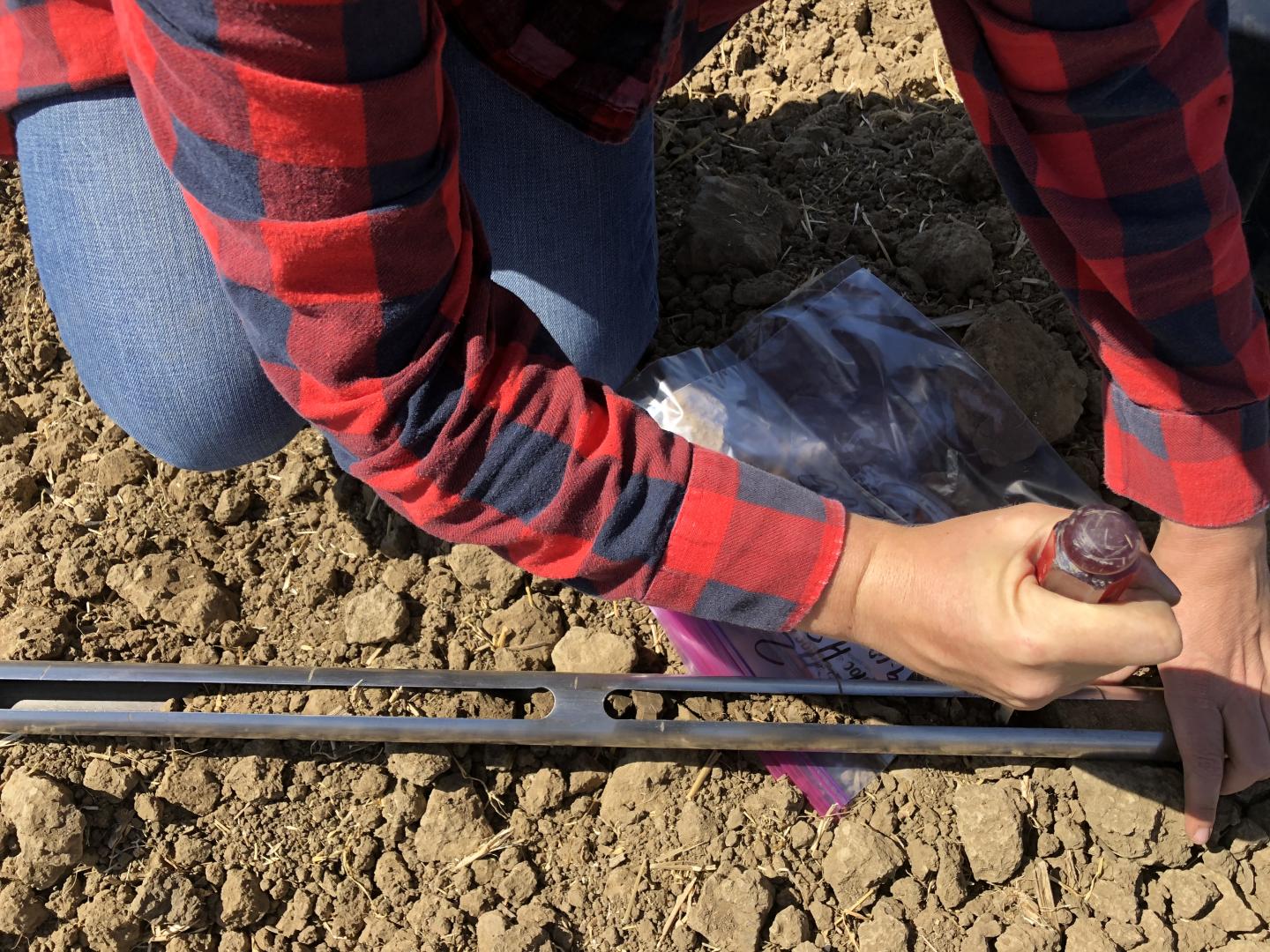 Newswise — By moving beyond the surface level and literally digging deep, scientists at the University of California, Davis, found that compost is a key to storing carbon in semi-arid cropland soils, a strategy for offsetting CO2 emissions.

For their 19-year study, published in the journal Global Change Biology, scientists dug roughly 6 feet down to compare soil carbon changes in conventional, cover-cropped and compost-added plots of corn-tomato and wheat-fallow cropping systems. They found that:

- Conventional soils neither release nor store much carbon.

- Cover cropping conventional soils, while increasing carbon in the surface 12 inches, can actually lose significant amounts of carbon below that depth.

- When both compost and cover crops were added in the organic-certified system, soil carbon content increased 12.6 percent over the length of the study, or about 0.07 percent annually. That's more than the international "4 per 1000" initiative, which calls for an increase of 0.04 percent of soil carbon per year. It is also far more carbon stored than would be calculated if only the surface layer was measured.

"If we take the time and energy to look a little deeper, there's always more to the story," said co-first author Jessica Chiartas, a Ph.D. student with the UC Davis land, air and water resources department. "The soil represents a huge mass of natural resource under our feet. If we're only thinking about farming the surface of it, we're missing an opportunity. Carbon is like a second crop."

Nationwide, many studies that investigated carbon change in the top foot of soil found that cover-cropped systems store carbon. The UC Davis study also found gains in the surface but, deeper down, enough carbon was released from cover-cropped systems that it resulted in an overall net loss.

"There are other benefits to cover crops that farmers may still enjoy, but in our systems, storing carbon is not necessarily one of them," said co-first author Nicole Tautges, a cropping systems scientist with the UC Davis Agricultural Sustainability Institute. "We'd make more progress by incentivizing compost."

The researchers did not compare composted systems without cover crops, but suspect the compost helped sequester carbon despite the cover crop, a notion they intend to investigate further.

Carbon has to filter through soil microbes to create stabilized forms of carbon in soil. Compost provides not only carbon but also additional vital nutrients for those microbes to function effectively.

"One reason we keep losing organic matter from soils is that our focus is on feeding the plant, and we forget the needs of others who provide important services in soil like building organic carbon," said senior author Kate Scow, director of the UC Davis Russell Ranch Sustainable Agriculture Facility. "We need to feed the soil, too".

Having a balanced diet can make the difference between how much carbon stays in the soil versus how much is released as carbon dioxide, Scow said.

When their diet is out of balance, microbes seek out missing nutrients, mining them from existing soil organic matter. This results in the loss rather than gain of carbon. The authors think that deep in the soil, cover-crop roots provided carbon but not the other nutrients needed to stabilize it.

The study was conducted in California's northern Central Valley at the Russell Ranch Sustainable Agriculture Facility, part of the Agricultural Sustainability Institute at UC Davis. The results indicate that semi-arid Mediterranean climates like the study site may be capable of storing far more carbon in the soil than once thought possible.

"This work coming out of Russell Ranch at UC Davis is very timely as the state invests in programs to sequester carbon in soils," said Secretary Karen Ross of the California Department of Food and Agriculture. "Carbon sequestration in soils through the addition of compost is a key practice in our Healthy Soils Program and we are delighted that the science and policy efforts are aligning and supporting each other."

The results also indicate an opportunity for compost to provide multiple, interconnected benefits to farmers and the environment by improving soils, offsetting greenhouse gas emissions, and transforming animal and food wastes into a valuable product the soil needs.

The study was supported by funding from the USDA National Institute of Food and Agriculture and the UC Davis College of Agricultural and Environmental Sciences.

Caption: Researchers talk while a tractor moves across a field at the UC Davis Russell Ranch Sustainable Agriculture Facility in 2016.