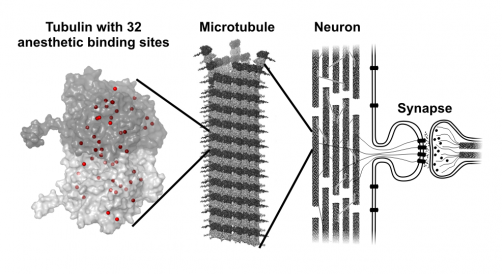 Newswise — Modern anesthesia is extremely safe. But as risks to heart, lungs and other organs have waned, another problem has emerged in the elderly: post-operative cognitive dysfunction. Mentally, some patients “just aren’t the same” for months or longer after surgery. Other factors play a role, but a small number of patients deteriorate mentally due to anesthesia per se. Those with Alzheimer’s disease suffer exacerbations, and those without the diagnosis may have it unmasked by anesthesia, suggesting some relationship. Alzheimer’s disease has two types of brain lesions. Beta-amyloid deposits accumulate outside neurons but don’t cause cognitive problems. Neurofibrillary tangles inside neurons, composed of hyper-phosphorylated ‘tau’, a protein normally attached to microtubules, do correlate with dementia. These same tau tangles are found in post-anesthesia dementia. Microtubules (MTs) polymerize from ‘tubulin’ proteins to grow, shape and regulate neurons. Synaptic components are transported by motor proteins which move like railroad trains along MT tracks. In branching dendrites, motors change MTs repeatedly to reach their destination. Tau is a traffic signal, telling motors where to get on and off, the route encoded in MT binding sites for tau. That MTs process information stems from Charles Sherrington in the 1950s, with recent controversial suggestions of MT computing, and even quantum computing mediating consciousness and memory. But whether MTs play a primary, or mere supportive role, their stability and function are essential to cognition and consciousness. Excessive phosphorylation had been thought the culprit in detaching tau and causing tangles. But destabilized MTs now appear to be the primary problem in both Alzheimer’s and post-anesthesia dementia, releasing tau which then becomes hyperphosphorylated. Anesthetics are known to bind to tubulin, in some cases for days after exposure, and in high doses to cause MT disassembly. Now, in a study in PLoS ONE, a team from Canada, Portugal and the USA report molecular modeling showing 32 anesthetic binding sites per tubulin, with at least 1 percent (10 million) of the billion tubulins per brain neuron binding an anesthetic molecule at clinical concentration (1 ‘MAC’). Two particular anesthetic binding regions may destabilize MTs, one inactivating tubulin C-termini tails (which otherwise knit together neighboring tubulins). The other weakens side-to-side tubulin couplings, the critical link in MT lattices, but only at high anesthetic concentrations, or perhaps with other MT destabilizing factors (low temperature, low zinc, high calcium, acidosis). Travis Craddock PhD, lead author on the study said: “The good news is that therapies aimed at microtubule stabilization may help in both Alzheimer’s and post-anesthetic dementias. Clinical trials are underway, or planned, for microtubule stabilizers Epothilone D, NAPVSIPQ, and the zinc ionophore PBT2, as well as brain ultrasound, shown in vitro to excite MT resonances and promote polymerization. However it’s done, ‘tightening the tubules’ may best treat dementia.”