Computer Model Recreates the Storm That Sank the Edmund Fitzgerald 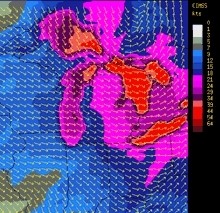 This computer model, developed at the Space Science and Engineering Center, recreates surface wind speed (knots) and direction about seven hours before the last communication from the Edmund Fitzgerald freighter on Nov. 10, 1975. Northwesterly gale force winds (34 to 40 knots, in red) are indicated in the eastern Lake Superior region where the ship was lost. These types of simulations help build the accuracy of severe weather computer models and are valuable teaching tools.

Newswise — On Nov. 10, 1975, Lake Superior swallowed the Edmund Fitzgerald, along with her 29 crewmembers and cargo of almost 26,000 tons of ore. The wreck evolved into a Midwestern legend. Thirty years later, researchers at the University of Wisconsin-Madison have built a simulation of the storm using the latest forecast technology.

November storms tend to roll across the Great Lakes, gathering strength and fury. The one that sank the Fitzgerald was no exception. Simulations of weather events like this allow scientists to identify and study characteristics of severe storms. Looking back also helps forecasters and weather modelers improve severe weather prediction techniques.

Robert Aune, a scientist with the National Oceanic and Atmospheric Administration (NOAA) stationed at the University of Wisconsin-Madison Space Science and Engineering Center (SSEC), recently created a simulation of the storm that swept across Lake Superior on that November evening.

Aune plugged reanalyzed data from November 8-11, 1975 into a model in operation at Madison's Cooperative Institute of Meteorological Satellite Studies (CIMSS). The model uses atmospheric observations from several different instruments, including those aboard satellites, to produce weather forecasts.

Aune says these models normally require satellite data, so the biggest challenge was in building this model from other data sources. The effort has broader potential, he says: "Running retrospective cases like this - especially on extreme events - is a good exercise to see if we can reproduce features of a particular storm that happened years ago."