Research shows that concrete is a living body and can heal itself as an intrinsic characteristic. 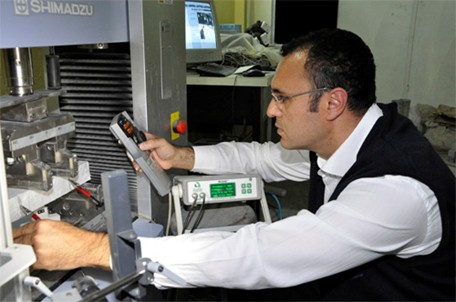 Newswise — In the human body, small wounds are easily treated by the body itself, requiring no further care. For bigger wounds to be healed, the body may need outside assistance. Concrete is like a living body, in that it can self-heal its own small wounds (cracks) as an intrinsic characteristic. However, cracks do not heal easily in conventional concrete due to its rather brittle nature, which calls into question the effectiveness of self-healing in conventional concrete materials with no control over crack formation.

Robust self-healing composites called Engineered Cementitious Composites (ECC) are based on an advanced material technology first proposed by Dr. Victor C. Li from University of Michigan, Ann Arbor. Unlike the conventional concrete materials preferred in most field practices, ECC, which has reinforcing microfibers smaller than human hair, is relatively ductile in tension. Ductility is a direct result of strain-hardening response due to the formation of multiple closely spaced microcracks with average widths of less than 100 micrometers. Even under excessive loading conditions, crack widths remain constant.

“Having cracks with widths at micrometer levels allows us to add special attributes such as self-healing to ECC material,” says Mustafa Sahmaran, Professor of Civil Engineering and Director of Advanced Infrastructure Materials Research Laboratory at Gazi University, Ankara, Turkey. “Despite the number of studies on self-healing materials development, recent popularity of the technology escalated very suddenly due to the repetitive repair and/or maintenance needs of deteriorating infrastructures. The process of self-healing in ECC materials is quite straightforward. Cracks heal themselves with the help of two main mechanisms: ongoing hydration reactions of anhydrous cementitious materials resulting in further calcium-silicate-hydrate gels and calcium carbonate precipitation. What is needed for these two reactions to take place is abundantly available for structures located anywhere in the world: water and air. Despite the effectiveness of self-healing in ECCs with micron-size cracks, some critics question the “robustness” of the mechanism. One such robustness criterion is the “repeatability,” or multiple reoccurrence of crack closure. The other criterion is the “pervasiveness,” meaning that the mechanism should take place all over the structural element rather than being restricted to certain areas.”

In a research paper entitled “Repeatability and Pervasiveness of Self-Healing in Engineered Cementitious Composites,” accepted and soon to be published by ACI Materials Journal, Dr. Sahmaran and his lab team, in cooperation with Dr. Mohamed Lachemi from Ryerson University, Canada, sought an answer to the question of robustness of the self-healing mechanism in ECCs.

“We have been able to prove the relatively high robustness of self-healing in ECC,” says Gurkan Yildirim, research assistant and Ph.D. candidate in Civil Engineering at Gazi University.  “Even after six repetitive pre-cracking occurrences from the exact same place, each one almost causing specimen failure, ECC material can recover by 85% depending on the test method utilized in the evaluation of self-healing rate. Self-healing rates recorded from different sections of specimens also confirm that results are very close to each other, meaning that the mechanism is rather pervasive. On top of that, ECC material does not sacrifice the intrinsic tight microcracking behavior, so that after the application of pre-cracking from the same place up to nine repetitive times, maximum crack width is restricted to a 190 micrometer level, which also leads to superior durability characteristics, even under harsh environmental conditions.”

With its inherent tight microcracking and self-healing behavior, ECC could be a new generation material solution to many mechanical and durability property challenges, substantially contributing to prolonged infrastructure functionalization.