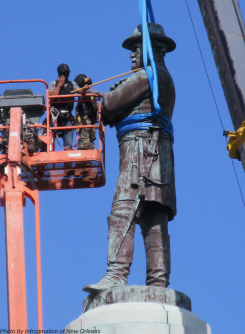 Newswise — U.S. history is undergoing a shift of monumental proportions. Increased public pressure has resulted in the dismantling and removal of a number of Confederate-themed monuments and memorabilia around the country to the delight and dismay of divided citizens. So what becomes of these discarded monuments? And what happens to the changing landscape - and American history? Experts are available to offer more context on this timely topic.

Prison inmates learning from students and students learning from inmates. Arizona State University is unlocking the potential of transformative learning through education and exchange. Alongside courses in Art, English, Math and Psychology, ASU’s Prison Education Programming offers students on “the inside,” access to real-time class collaboration and study with students from the outside through the Inside-Out Prison Exchange Program. Learn more about this important program from the faculty members leading the exchange.

Forests in Central America are among the growing casualties in the war on drugs. Researchers from ASU’s School of Geographical Sciences and Urban Planning have linked rapid deforestation in Caribbean Honduras, Guatemala and Nicaragua to drug trafficking and the efforts to combat it in the region. Find out from the study’s authors what narco-deforestation could mean for locals and the environment in Central America.

Members of ASU’s Department of English are feeling a little pride in the name of Alberto Rios. A poem by the Regents’ Professor of English is being featured on U2’s current Joshua Tree 2017 world tour. The Irish rock band has been projecting Rios’ work The Border: A Double Sonnet alongside other well-known poems in sold-out stadiums. Rios is also the designated Poet Laureate of the state of Arizona, a title he has held since 2013. Learn more about Alberto Rios and his guest appearance on U2’s tour.