Congo Gets Tough on Wildlife Traffickers 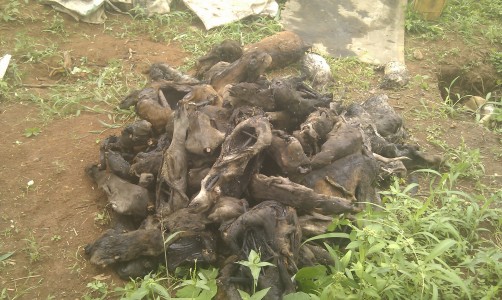 In an unrelated incident, two bushmeat traffickers were arrested transporting 30 carcasses of similar wildlife through the Mila Mila area of Niari. The traffickers are currently awaiting trial.

The seizure and arrests were assisted by PALF (Project for the Application of Law for Fauna – Republic of Congo), a pioneering partnership of the Wildlife Conservation Society and the Aspinall Foundation and supported by the USFWS that is committed to ending wildlife trafficking in Congo.

Conservationists report that recent infrastructure improvements such as better roads and transportation hubs in Congo have resulted in an uptick in illegal hunting and trafficking of protected species. In addition, traffickers are resorting to threatening wildlife authorities and PALF members in an effort to scare local authorities.

To aid in future enforcement efforts, PALF launched a sniffer dog program last month that works with local authorities to detect illegal wildlife products including ivory being transported within the country and internationally.