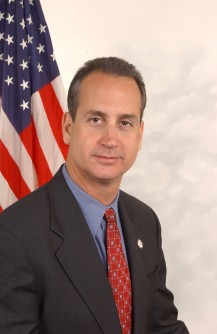 “Congressman Diaz-Balart has dedicated the last quarter century serving the citizens of Florida both in our state legislature and Congress,” said Fred Lippman, R.Ph., Ed.D., HPD chancellor. “His work to protect our future through Everglades restoration, hurricane preparedness, and highway safety is admirable.”

Diaz-Balart served a total of 14 years in the Florida State Legislature in both the House and Senate. At age 31, he became the youngest person ever elected to the Florida Senate, as well as the first Hispanic to serve as Chair of the Combined Appropriations / Ways and Means / Finance and Tax Committee. During his tenure in the state legislature, he consistently ranked among the most effective legislators in Florida, developing a reputation as a budget hawk and supporting minority voting rights.

Diaz-Balart was elected to the U.S. House of Representatives in 2002. He currently represents Florida’s 25th Congressional District which includes portions of Broward, Collier, Hendry, and Miami-Dade counties.

Diaz-Balart serves on the House Committee on Appropriations and three of its subcommittees: State and Foreign Operations; Commerce, Justice, and Science; and as vice-chair of Financial Services.

While in Washington, D.C., he has worked tirelessly to make American homes and communities safer and stronger in the face of hurricanes and other natural disasters, particularly by introducing legislation that would provide financial incentives to states that adopt and enforce nationally recognized model building codes. He also introduced legislation to incentivize home and building owners to utilize resilient construction methods when building and renovating home and commercial structures in federally declared disaster areas.

Diaz-Balart has been a strong proponent of improving public safety and transportation. Throughout his tenure in Congress, he has helped deliver millions of federal dollars for the I-75 widening project and Miami-Dade Transit. As founder and co-chairman of the Everglades Caucus, he has consistently fought to secure billions of dollars for the overall restoration and prevented massive funding cuts in recent years. He has also promoted hurricane preparedness and ensured federal relief for Florida in the aftermaths of Hurricanes Katrina, Wilma, and Rita.

###About Nova Southeastern University: Situated on 314 beautiful acres in Ft. Lauderdale, Florida, Nova Southeastern University (NSU) is a dynamic research institution dedicated to providing high-quality educational programs at all levels. NSU is a not-for-profit independent institution with 27,000 students. NSU awards associate’s, bachelor’s, master’s, specialist, doctoral and first-professional degrees in a wide range of fields. NSU is classified as a research university with “high research activity” by the Carnegie Foundation for the Advancement of Teaching, and it is one of only 37 universities nationwide to also be awarded Carnegie’s Community Engagement Classification. For more information, please visit www.nova.edu. Celebrating 50 years of academic excellence!