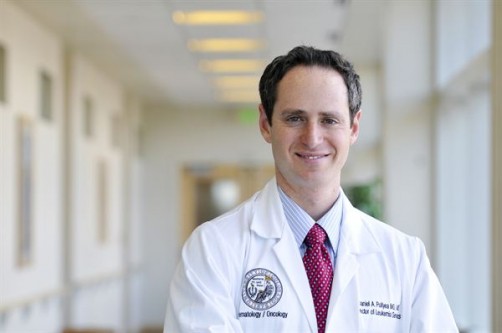 Daniel A. Pollyea, MD, MS, investigator at the University of Colorado Cancer Center and clinical director of Leukemia Services at the CU School of Medicine

“We now know a tremendous amount about the genetic underpinnings of the disease. We can test for these genetic changes in the clinic to see what’s making a patient’s disease tick. And often there are targeted therapies that can be matched with these genetic changes. But there’s a disconnect between what can be done, what should be done, and what is being done,” says Daniel A. Pollyea, MD, MS, investigator at the University of Colorado Cancer Center, clinical director of Leukemia Services at the CU School of Medicine, and the study’s lead author.

For example, FLT3 is a commonly mutated gene with several drugs in clinical development to specifically target this mutation. But this drug can only be used once genetic testing pinpoints the patients likely to benefit, namely those with FLT3 activation. Additional targeted treatments for AML are in development, such as Pollyea’s own work with the drugs AG-120 and AG-221, which target the 15-20 percent of AML harboring mutations in the genes IDH1 and IDH2.

Previously, the majority of data describing rates of genetic testing in AML patients have come from clinical trials, where adherence to guidelines is, as expected, very high. The current study hoped to evaluate adherence to genetic testing guidelines in AML treated outside clinical trials, in academic medical centers and in community settings. The data comes from the new, unique resource of the CONNECT MDS/AML Disease Registry, which collects treatment and outcome statistics from 86 sites distributed across the United States. Current results reflect data gathered from 2013 to 2016.

“Basically, we’re not seeing adherence to these guidelines. It’s still a big challenge for a lot of institutions,” Pollyea says. He points out that often a major barrier to genetic testing in AML (and many other cancers) is the willingness of insurance companies to pay for testing. He also suggests that with adherence to these guidelines so low, perhaps the guidelines themselves need adjustment, though, “I think the guidelines are pretty solid and, in my opinion, I would say they don’t go far enough in recommending genetic testing,” he says.

The major accomplishment of the current study may be setting a baseline against which future data can be measured.

“We’re in our infancy with this testing, and even earlier than infancy in seeing how we’re doing on testing. But now with this registry we at least have the infrastructure available to ask these kinds of questions,” Pollyea says.

As known genetic drivers of AML are successfully paired with targeted treatments and more of both are discovered, genetic testing is likely to become an even more essential component of clinical care. Now with an understanding of the current state of genetic testing in AML, Pollyea and colleagues will be able to evaluate changes in these data as diagnostic, prognostic and treatment options evolve.