Connecting the Dots with a Golden-Winged Warbler

Listen to a Golden-winged Warbler. 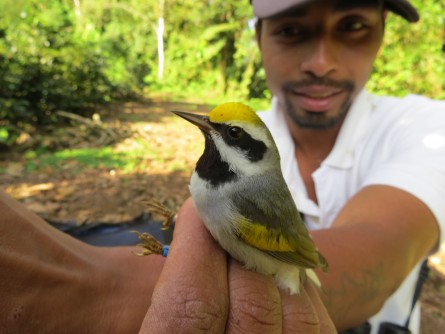 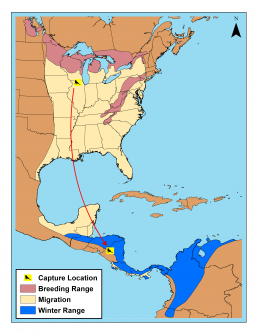 Golden-winged Warblers migrate from the Northwoods to Central America every spring and fall.

Newswise — Catching a Golden-winged Warbler sounds like a mythical quest. The tiny bird is quite real, though, and a number of researchers track the species. The warblers migrate from the Northwoods of the Midwest to Central America every year and researchers put bands on the legs of a handful to keep tabs on them. Now, for the first time, the same Golden-winged Warbler has been caught at both a migration hotspot and in his wintering grounds.

Catching a warbler that someone else banded is “like a one in a million longshot,” says Amber Roth, a Michigan Technological University researcher who netted the bird in Nicaragua. “It’s a needle in the haystack for sure, especially for this species.”

While Golden-winged Warblers are not fairytale creatures, the fact that different researchers caught the same bird is a dream come true.

“This is one of the things that people in our field sit and talk and dream about, ‘Wouldn’t it be cool if someone caught one of these birds someday?’” Roth says, admitting she was excited when she and her fellow researchers caught the warbler at Reserva El Jaguar, a private forest reserve, in Nicaragua on January 25th of this year. James Marshall of Rockford University initially banded the bird on September 2nd, 2014 at the Severson Dells Forest Preserve in Illinois.

Marshall works with Rockford University undergraduates on a number of research projects involving birds, including how migrant birds help spread invasive bush honeysuckles. All of the projects involved banding birds, but none were explicitly looking for Golden-winged Warblers.

For Roth, finding the Golden-winged Warbler ties into her migration study work. She leads an initiative to better track migratory birds around the Great Lakes.

Connecting the dots between the breeding grounds, migration stop-overs and wintering grounds is important because Golden-winged warblers are sharply declining.

“You’re losing a lot of your birds every year,” Roth says. “That’s why you see sites with hundreds of birds just go to zero in several years. They just can’t replace their losses fast enough.”

To turn the population trend around, researchers are looking into the impacts of climate change, habitat loss, migration hazards and hybridization with Blue-winged Warblers. Some of those findings now hinge on this Golden-winged Warbler and his migration story.

“That’s why those of us who study this bird find it so fascinating, because there are so many different issues that come into play,” Roth says, marveling that one little Golden-winged Warbler will connect the dots not only on his own journey, but connect research threads and people across the Western Hemisphere. 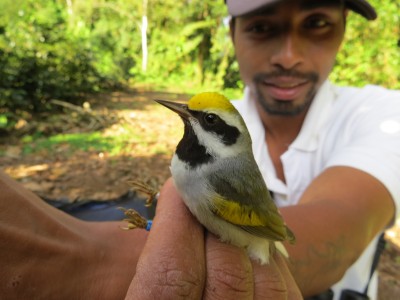 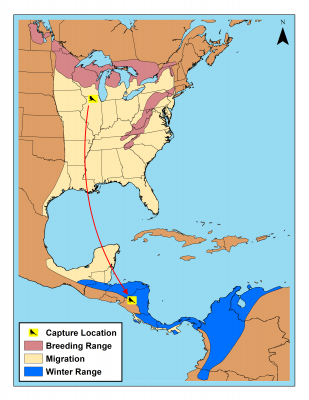 Caption: Golden-winged Warblers migrate from the Northwoods to Central America every spring and fall.