19-Mar-2012 9:00 AM EDT, by Center for Consciousness Studies, University of Arizona
favorite_border 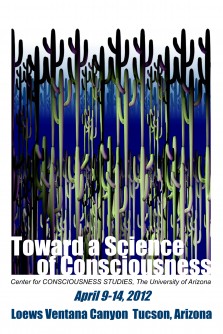 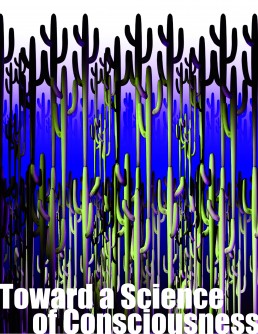 April 9-14, 2012 Toward a Science of Consciousness Conference - Tucson

Newswise — Whether one takes a Western, materialist view (consciousness is strictly a product of brain electrochemical activity), or an Eastern, spiritualist approach (consciousness creates reality; consciousness is all there is), one fact is clear: consciousness is the single most important aspect of life. In the end, conscious awareness and feelings are all that matter. The tenth biennial interdisciplinary conference Toward a Science of Consciousness (TSC) takes place April 9-14, 2012 at the Loews Ventana Canyon Resort Hotel in Tucson, Arizona.

The largest and longest-running (since 1994) gathering on the topic of consciousness covers a wide range of approaches to the fundamental questions of how the brain produces consciousness, the nature of reality and our place in the universe. Over 700 scientists, philosophers, artists and spiritualists from 50 countries will convene for a week of lectures, discussions, social events and fun in an exquisitely beautiful desert mountain setting.

Topics and speakers for the Plenary Program, put together by philosopher David Chalmers (Australian National University, Canberra) and anesthesiologst Stuart Hameroff (University of Arizona, Tucson) will include War of the Worldviews, a debate among Eastern spiritualist Deepak Chopra, physicists Leonard Mlodinow (co-author with Stephen Hawking of “Grand Design) and Menas Kafatos (“The Conscious Universe”) and materialist Susan Blackmore, Searching and Detecting Consciousness (in coma, anesthesia and sleepwalking) with neurologist Steven Laureys, Melanie Boly, George Mashour and Antonio Zadra, a debate on Higher Order Thought (HOT) theories with philosophers (Ned Block, David Rosenthal) and neuroscientists (Hakwan Lau, Victor Lamme), the controversial Feeling the Future (experimental evidence for backward time effects in the brain) by psychologist Daryl Bem, Fractal Brain Activity related to consciousness, Echolocation (in humans, bats and dolphins), and Consciousness and Hallucinogens, regarding brain imaging and therapeutic potential for psilocybin mushrooms. Other Plenary Sessions will include Consciousness Without Attention?, The Explanatory Gap, and Time and the Brain. In addition to 30 Plenary and Keynote talks, 120 Concurrent talks in 24 late afternoon sessions, 240 Posters, Art/Tech/Health Demo sessions, Exhibits, The Consciousness Poetry Slam/Talent Show and various Social Events will occupy late afternoons and evenings. Pre-Conference Activities include a Forum on Eastern Philosophy and Consciousness, and Workshops on Philosophical Approaches, Neuroscience of Music, Synesthesia, Afterlife Hypotheses, Quantum Physics and Consciousness, and Deepak Chopra on the Neuroscience of Enlightenment. The conference is sponsored and organized by the Center for Consciousness Studies at the University of Arizona. 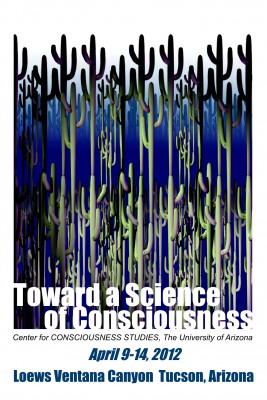 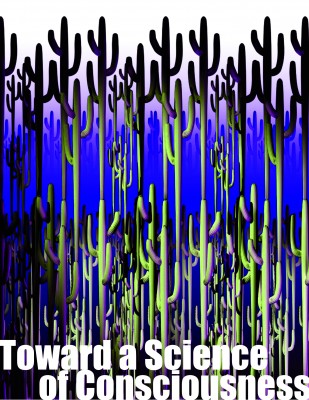 Caption: April 9-14, 2012 Toward a Science of Consciousness Conference - Tucson