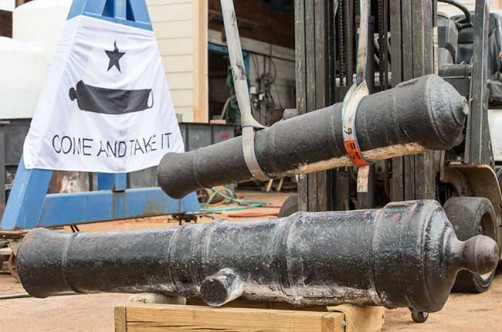 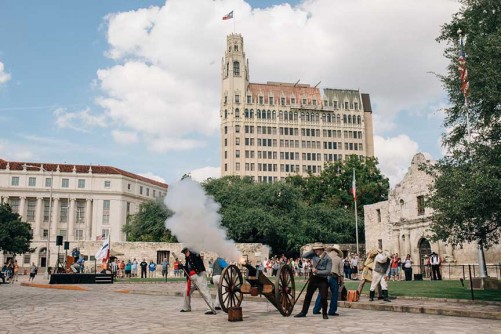 All seven of the cannons used in the 1836 Battle of the Alamo that are on display at the Alamo, such as the one fired during Cannon Fest, are gradually being conserved by the Conservation Research Laboratory at Texas A&M.

Newswise — Texas A&M conservators have revealed new details about two cannons used during the Texas Revolution’s 1836 Battle of the Alamo.

The Rio Grande Cannon and Spanish Cannon returned home to the Alamo in San Antonio on Monday after almost four months at Texas A&M University’s Conservation Laboratory on the RELLIS Education and Research Campus in Bryan.

"It's amazing that after 300 years, we're still learning new things about the Alamo's history and the 1836 siege and battle," said Alamo CEO Doug McDonald. "We know a lot of Alamo and history enthusiasts will be excited to learn more about these artifacts, and we can't wait to see what we learn about the rest of our battle cannons."

Research Associate Jim Jobling and his team found an unfired cannonball loaded within the 4-pound Spanish cannon. They discovered that the gun, likely produced during the early 1700s, was more than 100 years old when it was used at the Alamo battle.

“While we can't say for sure, it is possible that the cannonball we found in the gun was loaded during the 1836 Battle of the Alamo, but of course, never fired,” Jobling said.

The team removed two cannonballs from the muzzle and bore of the short, 6-pound Rio Grande Cannon. They worked with cannon collectors and experts in Texas and England to determine that the cannon originated at the Bersham Foundry in Wrexham, Wales.

“When we received the [Rio Grande] cannon, we noted that the ‘B’ engraved on the side might indicate it had come from the Bersham Foundry,” Jobling said. “Sure enough, our expert in England agreed. We believe this cannon was produced sometime between 1770 and 1795.”

During the conservation process, Jobling and his team stabilized the iron and removed the oxidation and corrosion. They submerged each cannon in a vat of sodium hydroxide solution that loosened and sloughed the thick paint while subjecting the artifact to an electrical current that removed the corrosion. They used boiling rinses to clean the residual chemicals and salts from the surface, tannic acid to blacken the gun, and industrial-grade black paint to seal the surface of the artifact.

The cannons will be mounted on the grounds of the Alamo for visitors to enjoy, and an official unveiling will take place March 2, Texas Independence Day.

Nine cannons – seven used during the Alamo battle and two others from the same time period – are being conserved by Texas A&M. Two more were transported from the Alamo to the lab for conservation on Monday. The work will continue until all the cannons are conserved.

History lovers can contribute to the cannon preservation project by visiting www.gofundme.com/alamobattlecannon. More information about the cannon unveiling and other upcoming events can be found at TheAlamo.org, or on social media @OfficialAlamo.