IT’S NOT NEWS THAT EXERCISE IS GOOD FOR YOUR HEALTH, BUT SCIENTISTS CONTINUE TO LEARN MORE ABOUT JUST HOW BENEFICIAL REGULAR EXERCISE CAN BE. NOW A STUDY LED BY RESEARCHERS AT THE SITEMAN CANCER CENTER AT WASHINGTON UNIVERSITY SCHOOL OF MEDICINE AND BARNES-JEWISH HOSPITAL IN ST. LOUIS HAS FOUND THAT REGULAR PHYSICAL ACTIVITY IS ASSOCIATED WITH A LOWER RISK OF DYING FROM COLON CANCER. JIM DRYDEN HAS MORE 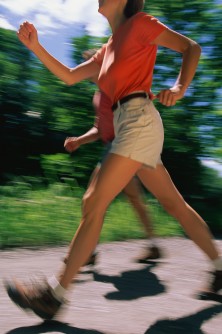 Walking for 30 minutes each day can lower the risk of dying from colon cancer.

Newswise — Consistent exercise is associated with a lower risk of dying from colon cancer, according to a new study led by researchers at the Siteman Cancer Center at Washington University School of Medicine and Barnes-Jewish Hospital in St. Louis. The study is among the first to show that physical activity can make the disease less deadly.

“People who were consistently active over the course of their adulthood had a lower risk of death from colon cancer than those who were sedentary,” says first author Kathleen Y. Wolin, ScD. “People often wonder around the start of a new year whether exercise really will help them stay healthy or whether it’s already too late. It’s never too late to start exercising, but it’s also never too early to start being active. That’s the message we hope people will take away from this study.”

Wolin, assistant professor of surgery in the Division of Public Health Sciences, says the benefits of starting an exercise program include not just preventing colon cancer and death from the disease, but also reduced risk of heart disease, diabetes and other cancers.

She says the greatest benefits seem to accrue in those who have exercised for the largest percentage of their lives. But it isn’t necessary to run marathons or to work out for many hours every day.

“You get enormous ‘bang for the buck,’” she says. “You go for a 30-minute walk every day, and you’re going to reduce your risk of a number of diseases. And in addition, our research has also shown that you feel better, physically and mentally, so you’re able to function better.”

And physical activity even can be beneficial after a cancer diagnosis already has been made.

This work was supported by the National Institutes of Health and by the American Cancer Society.

Siteman Cancer Center encompasses the combined cancer-related programs of Washington University and Barnes-Jewish Hospital. It is the only cancer center within 250 miles of St. Louis designated as a Comprehensive Cancer Center by the National Cancer Institute.