Contagion in the Herd: How One Person Can Set Off a Measles Outbreak 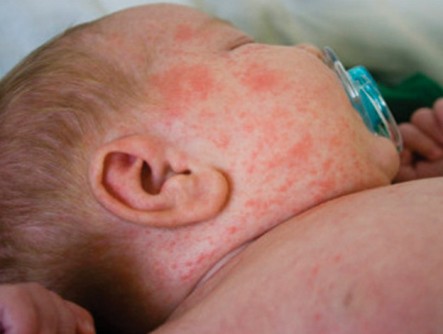 Measles are spreading because people are not getting vaccinated, says Jorge Parada, MD, medical director of infection control and prevention at Loyola University Health System.

Newswise — Americans may be victims of their own success when it comes to the eradication of infectious diseases and take their disease-free lives for granted, says Jorge Parada, MD, hospital epidemiologist and medical director of the Infection Prevention and Control program at Loyola University Health System.

“There are plenty of countries in the world where measles and chicken pox are very commonplace; I have served in Angola where mothers begged me for vaccines for their children because they had to live through seeing their other children and neighbors’ children suffering from natural infection,” says Parada.

In America, typically we no longer see many of these potentially deadly infectious diseases because so many people have been vaccinated. The diseases have basically died out in this country. “Unfortunately, that has led to increasing numbers of people to opt out of vaccinations leaving them vulnerable to infection. The problem is that people appear to have not only forgotten the negative impact of these infections, but also that these infections are still prevalent elsewhere – so it is only a matter of time before they get reintroduced to the United States. The current measles outbreak is a textbook example of this,” Parada says.

At least 85 cases of measles in seven states are traced back to Disneyland exposures during the week before Christmas. The expectation is that the outbreak will continue to spread further. The key to successful eradication of many infectious disease, such as measles, is through vaccination.

“When enough people in a population are vaccinated, it creates a situation we call herd immunity. The large number of vaccinated people act as a firewall, which provides a degree of protection to unvaccinated persons,” explains Parada, who also serves as professor of medicine at Loyola University Chicago Stritch School of Medicine.“What we are seeing now with the measles is a break in the herd immunity. One person who has the measles is now able to spread the disease widely through a chain of contagion through exposure to people who are not vaccinated.”

If you think the cold or the flu, is contagious, you haven’t see anything until you see measles, says Parada. “Just walking into the same room as a person with measles can transmit the disease,” cautions Parada. “And the measles is amplified through the ease of spreading through exposure to large populations where the odds are there may be unvaccinated individuals.”

A person with measles can start spreading it four to five days before a rash appears, and it can spread for about four days after the rash is gone. Therefore, many people with measles spread the infection unknowingly,” says Parada. Citing Centers for Disease Control data, Parada says, “As many as one in five of the people who get measles will develop serious complications. One in a thousand develops inflammation of the brain. Roughly, one in a thousand dies.”

To put that another way, Parada cautions, if you are unvaccinated, you’re about 35,000 times more likely to die from measles than you are to win the Lotter’s PowerBall.

As a rule, Dr. Parada urges people to be vaccinated - - if not for themselves, for other people. “A young adult may have a healthy immune system and get a very mild version of an infectious disease but the oldest and youngest, or someone with a chronic disease who is immunocompromised, or pregnant are at much greater risk for severe infection and complications,” he says. “If you won’t get vaccinated for yourself, do it for your grandparents or for your baby niece or just for the greater good of society.”

Dr. Parada says it is up to leaders in a community to step up and promote vaccination. “Studies have shown that when a physician recommends vaccinations, people get them,” says Parada, who has practiced medicine for more than two decades. “Doctors need to build review of vaccines in their practice so that if a patient comes in with a sprained ankle or a headache, the office can check the vaccination record and recommend the patient get it right there at that time.”

Fending off the measles for a lifetime requires only two shots. “The measles virus is very stable and does not mutate. Therefore, once an individual completes the two-shot vaccine series, he or she will have a lifetime of protection,” he says, comparing it with the flu virus, which mutates rapidly so that a new vaccine is recommended each year. “It is truly unfortunate that we are seeing so much damage when all it takes to prevent this measles outbreak is a simple vaccination.”

Loyola University Health System is recognized internationally as a leader in infection control and prevention. Loyola is one of a few select hospitals who invest in universal screening of all inpatients for MRSA. Loyola was one of the first institutions to require all staff to have mandatory flu shots as a condition of employment. Loyola was the only academic hospital to participate in a national C. difficile study and performs the most accurate testing for bacteria. Loyola also actively screens emergency department patients for HIV/AIDS as part of an ongoing research study.