Contiguous U.S. Has Warmest February in Past 39 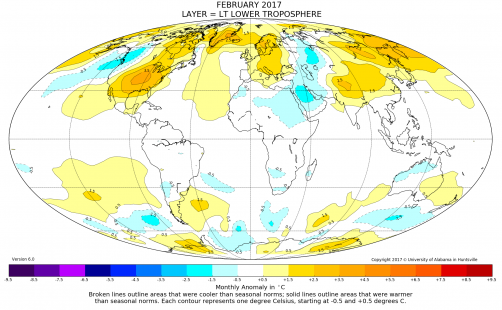 Contiguous U.S. has warmest February in past 39

The 2015-16 El Niño Pacific Ocean warming event has faded into history, but the globe still saw its fourth warmest February in the satellite global temperature record, including the warmest February in that time for the contiguous 48 U.S. states, according to Dr. John Christy, director of the Earth System Science Center at The University of Alabama in Huntsville. The average temperature over the U.S. was 2.1 Celsius (about 3.78 degrees Fahrenheit) warmer than seasonal norms in February 2017.

Compared to seasonal norms, the warmest spot on the globe in February was over Warrensburg, Missouri, with an average temperature that was 4.06 C (about 7.31 degrees Fahrenheit) warmer than seasonal norms.

Compared to seasonal norms, the coolest average temperature on Earth in February was near the town of Penny in central British Columbia, Canada. February temperatures there averaged 2.51 C (about 4.52 degrees F) cooler than seasonal norms. 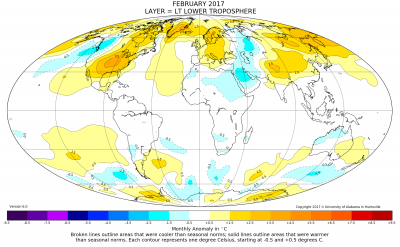