A green solution for a global problem 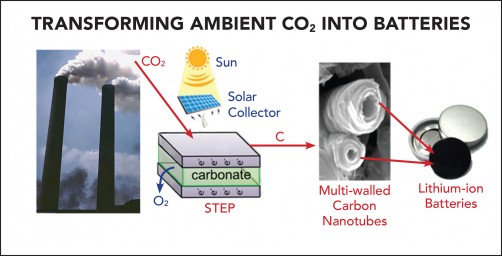 The Solar Thermal Electrochemical Process (STEP) converts atmospheric carbon dioxide into carbon nanotubes that can be used in advanced batteries.

Newswise — An interdisciplinary team of scientists has worked out a way to make electric vehicles that are not only carbon neutral, but carbon negative, capable of actually reducing the amount of atmospheric carbon dioxide as they operate.

They have done so by demonstrating how the graphite electrodes used in the lithium-ion batteries that power electric automobiles can be replaced with carbon material recovered from the atmosphere.

The recipe for converting carbon dioxide gas into batteries is described in the paper titled “Carbon Nanotubes Produced from Ambient Carbon Dioxide for Environmentally Sustainable Lithium-Ion and Sodium-Ion Battery Anodes” published in the Mar. 2 issue of the journal ACS Central Science.

The unusual pairing of carbon dioxide conversion and advanced battery technology is the result of a collaboration between the laboratory of Assistant Professor of Mechanical Engineering Cary Pint at Vanderbilt University and Professor of Chemistry Stuart Licht at George Washington University.

The team adapted a solar-powered process that converts carbon dioxide into carbon so that it produces carbon nanotubes and demonstrated that the nanotubes can be incorporated into both lithium-ion batteries like those used in electric vehicles and electronic devices and low-cost sodium-ion batteries under development for large-scale applications, such as the electric grid.

“This approach not only produces better batteries but it also establishes a value for carbon dioxide recovered from the atmosphere that is associated with the end-user battery cost unlike most efforts to reuse CO2 that are aimed at low-valued fuels, like methanol, that cannot justify the cost required to produce them,” said Pint.

The project builds upon a solar thermal electrochemical process (STEP) that can create carbon nanofibers from ambient carbon dioxide developed by the Licht group and described in the journal Nano Letters last August. STEP uses solar energy to provide both the electrical and thermal energy necessary to break down carbon dioxide into carbon and oxygen and to produce carbon nanotubes that are stable, flexible, conductive and stronger than steel.

Joining forces with Pint, whose research interests are focused on using carbon nanomaterials for battery applications, the two laboratories worked together to show that the multi-walled carbon nanotubes produced by the process can serve as the positive electrode in both lithium-ion and sodium-ion batteries.

In lithium-ion batteries, the nanotubes replace the carbon anode used in commercial batteries. The team demonstrated that the carbon nanotubes gave a small boost to the performance, which was amplified when the battery was charged quickly. In sodium-ion batteries, the researchers found that small defects in the carbon, which can be tuned using STEP, can unlock stable storage performance over 3.5 times above that of sodium-ion batteries with graphite electrodes. Most importantly, both carbon-nanotube batteries were exposed to about 2.5 months of continuous charging and discharging and showed no sign of fatigue.

Depending on the specifications, making one of the two electrodes out of carbon nanotubes means that up to 40 percent of a battery could be made out of recycled CO2, Pint estimated. This does not include the outer protective packaging but he suggested that processes like STEP could eventually produce the packaging as well.

The researchers estimate that with a battery cost of $325 per kWh (the average cost of lithium-ion batteries reported by the Department of Energy in 2013), a kilogram of carbon dioxide has a value of about $18 as a battery material – six times more than when it is converted to methanol – a number that only increases when moving from large batteries used in electric vehicles to the smaller batteries used in electronics. And unlike methanol, combining batteries with solar cells provides renewable power with zero greenhouse emissions, which is needed to put an end to the current carbon cycle that threatens future global sustainability. Licht also proposed that the STEP process could be coupled to a natural gas powered electrical generator. The generator would provide electricity, heat and a concentrated source of carbon dioxide that would boost the performance of the STEP process. At the same time, the oxygen released in the process could be piped back to the generator where it would boost the generator’s combustion efficiency to compensate for the amount of electricity that the STEP process consumes. The end result could be a fossil fuel electrical power plant with zero net CO2 emissions.

“Imagine a world where every new electric vehicle or grid-scale battery installation would not only enable us to overcome the environmental sins of our past, but also provide a step toward a sustainable future for our children,” said Pint. “Our efforts have shown a path to achieve such a future.”